Another fabulous Saturday is here and another amazing author is here to spend it with you. Ashe Winters has willingly agreed to this interrogation by the way. She's here to talk about her terrific books, answer some questions, and wrap it up with a giveaway for one lucky reader! So, have a seat and lets do this. 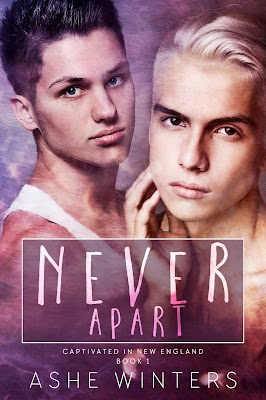 My heart throbbed a merciless, rhythmic beat as I accepted just how precious he was to me.

Nick tumbled hard for the waifish imp crying over a crushed pink donut. They were only little boys, but those big tears caused Nick's protective instincts to flare and he was forever captivated.

Though the future beckoned, Nick felt conflicted. He had fallen in love, and his aching desire for Cameron had grown deeper than he ever imagined possible. While Nick had always offered Cam his unwavering support, Cameron's downward spiral of self-doubt and battle for self-reliance nearly push Nick to the edge of letting go.

Cam realized he was a little different. He was artistic, flamboyant, and adored sparkly, pretty things. Endlessly bullied for not being “masculine enough”, Cam strived to discover his place in the world. College was supposed to help, but things weren’t going as planned.

Cam gained strength in Nick’s friendship, his personal knight in shining armor. A lifetime of indecisions paired with a surprising hunger for the one man who’d always been his anchor, propels Cam to face reality. Change was happening, whether he was ready or not.

“I promise I won’t ever leave you again, Cam. We’ll never be apart.”

Two men battle their hearts amidst an uncertain future.

When he can no longer hide his feelings, will Nick break his sacred promise to never leave Cam’s side even though his heart and body desperately crave the only man he has ever loved?

Can Cameron find the strength to believe in himself enough to follow his own path, or will his stubbornness keep him from chasing his own dreams and risk losing the man who’s always stood by him?

50% of all proceeds from the sale of this book will be donated to The Trevor Project. 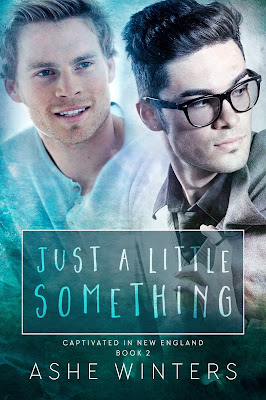 “You’re worth the risk, worth taking that leap.”

Single dad William “Will” Thomlett has adored the sweet, smiling leader of his twin daughters’ church youth group since the first moment he laid eyes on him. Aaron awakens a part of Will’s heart he believed lost forever the night his wife died. No one has noticed his attraction to the man, and Will plans to keep it that way. Or so he hoped. Unbeknownst to Will, his daughters had noticed, and they were ready for their dad to find his happily ever after again. Who better to fill the position than their favorite youth minister that Dad happened to secretly drool over?

“You make me want things I never felt I needed.”

Content with his life as a Youth Ministry Leader, Aaron Lochlan had never considered finding love on his to-do list. Well, it wasn’t until he agrees to chaperone a bunch of home-schooled teenagers on a trip to Boston. A complicated weave of emotions and desires he’d never experienced before pushes Aaron to examine everything he thought he knew about himself. The more time he spends with the handsome, magnetic father of two, the more he realizes Will brings out a side of himself he didn’t know he had.

Sometimes, you find that little something that becomes the answer to everything.

Meddling friends, scheming daughters, and a hotel room mix-up, force the two men into five days of awkward situations and the beginning of something neither expected to happen. There was only one problem—the trip can’t last forever. When life returns to normal, Will and Aaron find themselves questioning where they truly stand. Were the growing feelings between them only a byproduct of all the constant closeness, or were they maybe just a little something more?
50% of all proceeds from the sale of this book will be donated to The Trevor Project. 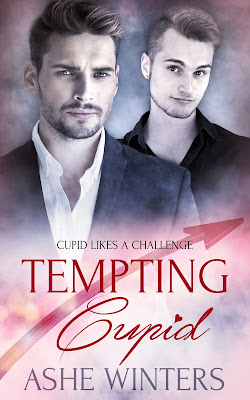 Love is in the air. And Dominic Ballard wants to gag. A hard break-up made Dominic disgusted with love and relationships. So, when that stupid holiday called Valentine’s Day rolls around, he’d rather do anything but join the masses celebrating. When a fellow co-worker dressed as Cupid delivers a Valentine from a secret admirer, Dominic announces to the entire office what he thinks about all that lovey-dovey stuff.

Casper Marello has a crush. On his boss. There is no way he’d ever act on it because dating your boss? That’s a big fat no-no in the employee handbook. But what harm could it be to invite Dominic out to dinner with Cas and his best friend on Valentine’s Day? Even if that boss just proclaimed his undying hatred for the emotion called love. It’s only a friend thing, right?

When dawn arrives, the two men wake-up, cuddled in the same bed. Naked. Swearing it was a one-time thing thanks to too much wine, they go their separate ways, with Dominic determined the relationship remain strictly friend zoned. Except, they can’t keep their hands off each other and the office heats up behind closed doors. Dominic finds himself unable to walk away from Casper as the walls around his heart melt. And Casper’s crush blooms into something much deeper than he ever expected.

Will Dominic and Casper fall to Cupid’s arrow or will they miss their chance to discover a love that can last for always?

Thank you, Ashe, for being here today on Diverse Reader and talking with us. It’s so fabulous to be able to pick your brain and get to know you a little better. Let’s get started.

As best you can, try and tell us what completing a book and getting it out into the world feels like?

I cannot remember a single point in my life that I didn’t want to be a writer. I’ve always had a big imagination, so storytelling came naturally to me. But, I never thought I’d get a book out there. When I released Never Apart, it was the most incredible moment of my life. I don’t have any kids, so that book was my first child. It means everything to me and I’m very happy with it.

The feeling of actually releasing a book runs such a wide spectrum. I was happy, elated, excited, and downright terrified. What if people hated it? Fortunately, that wasn’t the case, but it took a lot for me to talk myself down and just let it out there. As stressful as it was, I wouldn’t trade doing it for anything.

Growing up did you have any books you read over and over again vowing you would someday write a masterpiece like it?

All of V.C. Andrew’s books were like that for me. Those books are all about the angst, but there is also love. I’m a sucker for love and the way it overcomes so many obstacles. So, for me, these books were the epitome of what I wanted to write. So far, I haven’t hit that angst level yet, but I have plans!

There are two books in your Captivated in New England series. Can you tell us anything about what’s to come for that?

With the Captivated series, I had to make a really hard decision recently. Tatum is next, but he has been one of the most difficult characters to deal with. Many have probably heard writer’s say they have voices in their head. Well, Tatum is one of those and he is quite frankly a jerk. But I found that I was getting totally locked up way too much and losing interest when trying to work with him. A few weeks ago, when I had written very few words for months, I had to make the choice to put the Captivated series on the backburner. I know it’s not what readers want to hear, but if I want to put new books out, I have to do it. I will say, it was the correct decision because the words have been flowing like a raging river ever sense and I have a new series in the works that I’m completely in love with and so are my Alpha readers.

Name one of your books you’d love to see on the big screen?

I’d love to see Never Apart on the big screen. Cameron and Nick’s love story was just so strong. Plus, they are both young men, still in college and trying to find their way in the world. So many young people could relate to that.

But if I really had to choose, it would be a super secret Sci-Fi project I’m working on that if all goes well, will be out sometime early next year. It would make an awesome big screen movie.

I have so many works in progress right now, it’s almost overwhelming. But, the one I’m focused the most on is my new series titled With You. It’s a contemporary romance series that will feature six MM, one MMM, and one MMF couples/throuples within it. That is the plan for now. The first book, Dance With Him, is hopefully going to be out by the end of August.

I also have several collaborative projects in the works with other authors that I cannot wait to release, but we don’t have any timeframes yet nor are we releasing too many details.

My other big project is that I will be writing under a new pen name for a very specific subgenre known as Mpreg. Right now, the name is not released, but I will make it public the closer I get to releasing the first book in that series.

On FB, readers can find me on:
My author profile: https://www.facebook.com/ashewinters/
And in two groups: Winters’s Wicked Snow Angels and Romantic’s Rendezvous

I also have a website that is currently under construction as I’m reworking it to include new author branding and logos that are in the works. They can find it at www.ashewinters.com

Will you be attending any signings or conventions the rest of this year?

In October, I’ll be attending GRL in Portsmouth, VA. I’m going as a reader though, so I won’t be doing any kind of signing, but I’m really looking forward to meeting and hanging out with fellow readers and authors.

What is the one thing you hope a reader takes away from your books?

That love is one of the most important things in the world and that love is always love.

Thank you so much for being here and talking with me.

Ashe will be gifting one person an ebook copy from Amazon of any of her three currently released books... Never Apart, Just a Little Something, or Tempting Cupid
Contest will end on June 29th
Thanks!


a Rafflecopter giveaway
Posted by Diverse Reader at 7:47 AM