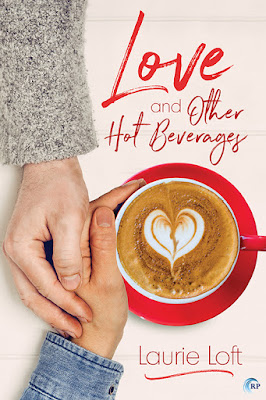 
After a rough breakup, Todd Addison wants time alone to grieve. While still dreaming of winning back his ex’s love, he moves across the country and finds work with a construction company. The last thing he needs is the cute office boy developing a crush on him, especially since he’s back in the closet.

Sebastián Nye can’t help feeling sorry for the obviously brokenhearted Todd. Though rebuffed repeatedly, Sebby chisels away at Todd’s resistance, determined to help him forget—a task potentially beyond anyone’s capabilities. He never meant to fall for the poor guy, but he does. Hard.

Desperate to hold on to Todd, Sebby hatches a sneaky plot guaranteed to end Todd's heartbreak—if Todd doesn't bail and ruin everything. Just when things can’t get more complicated, Todd’s ex wants him back. And Sebby’s abusive ex is just waiting to catch Sebby alone. Todd and Sebby must decide what’s worth fighting for, what’s worth sacrifice, and what’s worth compromise, or their relationship will begin and end with a broken heart.

I’m Laurie Loft, author of Love and Other Hot Beverages. Welcome to my blog tour, and thanks for being here! I’m excited to give out super cool prizes to two people who make thoughtful comments to any of my blog posts: one French press (an item which features prominently in my novel), and a $15.00 Starbucks gift card. Either way, you’ll enjoy plenty of hot beverages!

There’ll be seven posts in which I’ll discuss my book as well as unrelated items. Comment, and we can get to know each other a little better.

SOUNDTRACK TO LOVE AND OTHER HOT BEVERAGES

If my book became a movie, what would the soundtrack be like? Mostly pop music, plenty of love songs, naturally, annnnd lots of songs about coffee!

Here is a list of songs, in no particular order, that went through my head as I was writing or editing this book.

“Crazy Love” by Poco. This song describes Todd’s feelings about his ex. Um, except for the “her.” Just when I think I’m over her, this broken heart will mend, I hear her name and I have to cry, the tears come down again. It happens all the time. This crazy love of mine wraps around my heart, refusing to unwind.

“Falling in Love at a Coffee Shop” by Landon Pigg. It’s actually Todd and Viv who fell in love in a coffee shop, but I can’t resist this song. I think that possibly, maybe I’m falling for you. Yes, there’s a chance that I’ve fallen quite hard over you.

“Cielito Lindo” by Enrique Iglesias. Todd doesn’t speak Spanish, but he learns this song in order to sing it to his Latino lover.  Ese lunar que tienes, cielito lindo, Junto a la boca, no se lo des a nadie, cielito lindo que a mi me toca.

“Might Tell You Tonight” by Scissor Sisters. Sebby running around, manically cleaning his house, this song ribboning through his head: And I just might tell you tonight that I love you, and you should stay all my life.

“1000 Ships” by Rachel Platten. It mentions coffee. Plus Todd is fond of sweet and silly lyrics like this: I would bring your morning coffee then wrap you up in me. I’d kiss your belly and your shoulders, cover blankets on our feet.

“The Way I Am” by Ingrid Michaelson. Again, sweet and silly. If you are chilly, here, take my sweater. Your head is aching, I’ll make it better.

“Partner in Crime” by Laurie Loft. If this became a movie, hopefully the song I wrote for this book would get a tune. I can’t remember why you can’t forget. But, baby, don’t run out on me yet.

“Human” by The Human League. Sebby reminds Todd that neither of them is perfect.  I’m only human, of flesh and blood I’m made. Human, born to make mistakes.

“Come on, Get Higher” by Matt Nathanson. I suppose every love story can relate to this song! But poor Sebby, at one point: I miss the sound of your voice, the loudest thing in my head. And I ache to remember all the violent, sweet, perfect words that you said.

“Starfish and Coffee” by Prince. Sweet and silly, yet again. Plus, it mentions coffee. If you asked her what she had for breakfast, this is what she’d say, Starfish and coffee, maple syrup and jam, butterscotch clouds, a tangerine, and a side order of ham.

“Sweet Louise” by The Belle Brigade. This is the song I would insist on. It’s how I feel about Todd and Sebby. They couldn’t help themselves. Everybody probably thinks I’m crazy. Well I’ll just tell you now. That I fell in love, and I couldn’t help myself.

What do you think? Would you buy the soundtrack? Missing something? Not contemporary enough? Too cutesy?

Laurie Loft lives in Iowa, endeavoring to write stories to give you that rush. Her husband, cat, and dogs kindly tolerate this odd activity. Her first M/M novel came about because of a minor character in a straight romance who just took over and demanded his own book. Laurie enjoys NaNoWriMo (National Novel Writing Month) and other forms of writerly torture. She finds inspiration in her NaNo friends and her fellow Riptide authors. When not writing or working at her mysterious day job, she can often be found screaming at tangled cross stitch threads.

To celebrate the release of Love and Other Hot Beverages, one lucky winner will receive a $15 Starbucks gift card and a French press from Laurie! Leave a comment with your contact info to enter the contest. Entries close at midnight, Eastern time, on July 8, 2017. Contest is NOT restricted to U.S. entries. Thanks for following the tour, and don’t forget to leave your contact info!

Posted by Diverse Reader at 4:34 AM