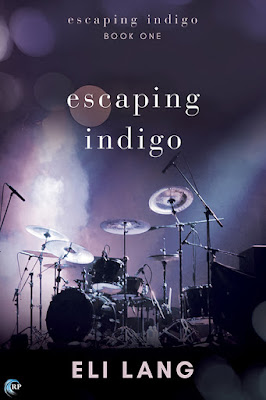 
Micah thought he’d always be in a band. All he ever wanted was to play drums and make great music, but when his best friend and bandmate passes away, Micah is left adrift. The thing that’s always lifted him up is now a reminder of everything he’s lost.


In an attempt to put his life back together, Micah takes a job as roadie for his favorite band, Escaping Indigo. He’s always admired the lead singer, Bellamy. On stage, Bellamy is confident, glittery, and radiant. But as the two grow closer, Micah realizes that in person, Bellamy is quiet, introspective, and a little uncertain. And that’s the person Micah is falling for.


Micah is determined to know all of Bellamy, both the rock star side and the side hidden from the audience, the side that creates music that touches Micah’s heart. Bellamy has secrets of his own, though, things he doesn’t want to share with anyone. And trying to uncover Bellamy’s truths might be the thing that ends up pushing him away.

“Is the Escaping Indigo one the only tattoo you have?” Bellamy asked.

“No. I have a couple others.” My voice was a little breathy, but either he didn’t notice, or didn’t say anything.

I pulled my left foot up so I could roll up my jeans and show him the curl of words, a line from a book, around my ankle.

I reached around and tapped the shoulder he’d been leaning on. He glanced up at me, and I nodded. His fingers reached for my collar.

“It’s on the shoulder blade,” I told him. “Near the top.” My breath came quick, and my voice sounded ragged, even though I tried not to let it be. I’d shown people the tattoo before. I’d even explained it. But not often. And never without hurting inside.

He pulled back the fabric of my shirt, and I tipped forward so the light would hit my skin. I felt the brush of his fingers over the black ink. He lingered for a second, like he was staring at it. Then he let me go, and I sat back. I tugged roughly at the collar of my T-shirt to get it to sit right.

“Whose initial?” he asked. I could still feel the ghost of his fingers on me. He’d traced all the curves and lifts of the stylized E, and I thought I could feel the shape of it on me, outlined with his touch.

I looked at him. I could see the dark circles under his eyes, the tension around them.

I wasn’t going to get out of this. But maybe . . . maybe that was okay, here, with him, in this quiet space.

I hesitated, then held out my arm, and he moved back into his spot against me, his breath warm against my neck. “A friend,” I told him. Not a boyfriend—Eric and I had never been like for each other, had never wanted to be. But not just a friend, either. A brother. I almost wanted to clarify, but maybe I didn’t need to, not with Bellamy. Not with the way he loved his own friends. “My best friend. He died.”

His whole body went still, as if the words had frozen him, and his eyes went wide. I braced myself for whatever he was about to say. But he didn’t say anything. He didn’t question it, didn’t ask how good a friend had to be before you tattooed him on yourself, how much you had to miss someone to do that. He didn’t ask me anything else about Eric at all, and I was glad. I didn’t want to be sad, and I didn’t want to go over it all again if I didn’t have to. “It’s pretty,” was all he said, at last.

“Do you want more? Tattoos?”

I nodded, and my cheek brushed his hair. His shoulder was warm under my hand. My fingers cramped with the desire to touch him, just a little, to have it be easy and right. I reached up and brushed his bangs back, tentative, and he tilted his head a bit, to give me better access. I stroked through his hair again. It was cool and soft between my fingers, and a bit tangled. “Someday. When I have money to spend.” I wanted to be able to make enough that I could write and draw the things I thought were important into my skin. I wanted to be able to mark myself, claim myself for myself through the things I loved, the things that reminded me who I was.

“Was the Escaping Indigo one your first?”

I shrugged my free shoulder. “It meant something to me, Bellamy.” I didn’t know how to explain it. How I’d loved getting it, how momentous it had been, to mark myself like that. How whenever I’d run my fingers over it afterward, I’d felt like maybe I wasn’t alone, that there was something out there, the music, the band, that connected me to something else. That let me be myself. That reminded me that I could be strong. Even if that band never knew I existed. I would always have that connection. It would still be real. “It just meant something.”

Bellamy’s knee nudged mine. “Did I? Mean something?”

I didn’t know how to answer him. His lyrics had meant something to me. They had meant a lot. So had the music behind them, the sounds of his guitar, the way his voice always captured me whenever I heard it. I’d always believed that those songs must have come straight from his heart, from his soul, because there was no way someone could write things like that and not mean them, not feel them, at least on some level. But some of those songs had been written almost a decade ago, maybe longer, and I didn’t know how much of the Bellamy from those songs was in the Bellamy I was holding against me. The Bellamy who I’d been nervous with, was still nervous with, who had been sweet and distracted me when I was hurting, who was still gorgeous and captivating on stage, even when I was standing on the other side.

I still had my hand in his hair, those too long, cinnamon strands tangling around my fingers. I’d cut my own dark-brown hair short after Eric died, some nod to grief, a way to say I was devastated without saying it out loud. It was getting almost as long as Bellamy’s now, though.

To celebrate the release of Escaping Indigo, one lucky winner will receive a $10 Riptide credit! Leave a comment with your contact info to enter the contest. Entries close at midnight, Eastern time, on July 22, 2017. Contest is NOT restricted to U.S. entries. Thanks for following the tour, and don’t forget to leave your contact info!