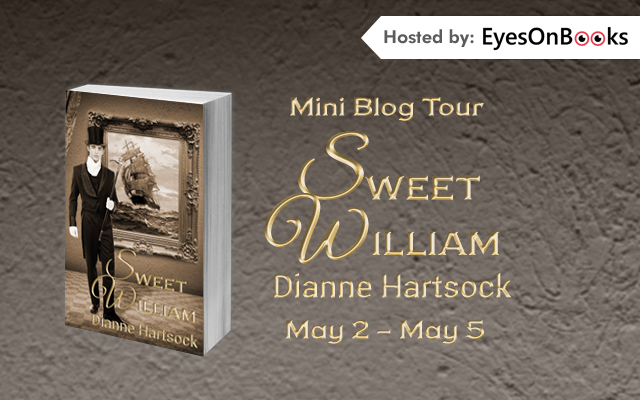 William Wilkerson leads the life of the privileged rich. Head of his father’s shipping business, he indulges to his heart’s content in the pleasures of the flesh with Boston’s finest young men.
That is, until he reunites with Fredrick: his former tutor and the one man who captured his heart.
But William’s father has declared Fredrick off limits. And Fredrick, himself, believes he’s beneath the attention of the Wilkerson heir.
After having lost his current pupil to graduation, and with no prospects of a replacement, Frederick is homeless, hungry, and easy pickings for the men on the docks.
When Frederick is shanghaied into service on William’s own merchant ship, will William discover his plight in time to rescue him?

Thank you so much Diverse Reader for having me over today. In SWEET WILLIAM, Fredrick is reunited with William, a young man he tutored and loved. But their affair was discovered by William’s father and Fredrick dismissed in disgrace, and Fredrick moved to Boston where he tutored the children of the privileged rich. He and William have met again, but Fredrick isn’t sure where he stands with the mercurial man, or if William even wants to pick up where they left off. Today, I’d like to give you a little peek at what might be a typical Sunday for Fredrick.

A warm breeze sifted through the leaves of the maple tree over his head despite the early hour, and Fredrick closed his eyes and let it caress his cheeks. The air was quiet, restful, and he settled more comfortably on the stone bench in the church’s graveyard. He should be inside with everyone, but his heart felt heavy and he couldn’t bring himself to make pleasantries with anyone that morning.
A few strains from the pipe organ in the stone building drifted to him and he wiped impatiently at a sudden tear. Though he had cause to feel morose, it would do him little good. His pupil would graduate in a few days and he hadn’t procured a new position. Time to get his paperwork in order and let it be known he was available.
But he couldn’t do anything on a Sunday, when families wouldn’t wish to be disturbed. Fredrick drew a deep breath and let the peaceful atmosphere seep into his soul. A smile curled his lips. He’d seen William that morning going into the new church across town. His heart sped again. William hadn’t seen him, and Fredrick had watched his trim form with longing before he disappeared through the ornate doors of the building. What would it be like to walk boldly at his side, sit beside him as if he belonged…
Fredrick opened his eyes, shocked at his own musing. It would be instant scandal and disgrace for both himself and William, something he would never risk. Maybe it would be better if he stayed away from William.
His worry washed away as he remembered a certain flash in William’s eyes. William wasn’t about to let him walk away, if he knew his lover as well as he thought. A tentative happiness settled in his chest and he rose to his feet. The organ was playing the last notes of the ending hymn and Fredrick wanted to be gone before the church emptied of its occupants. He’s take a stroll through the park, and maybe, just by accident, run into William on his way home.

FREDRICK HELD UP his glass and stared at the candle’s flame through the amber liquid. He took a sip and savored the rich, biting taste on his tongue, welcoming the burn down his throat. This was the very last drink he could afford and he had to make it last.
A giggle erupted from someone out of sight on the back staircase and a smile tugged his lips despite the dire state of his wallet. The laugh had been carefree, joyous, naughty. Fredrick shifted on the cushioned bench. The lunch hour had passed and he was the only customer in the dining room. He wondered if the innkeeper up front would notice if he adjusted his cramped cock as it throbbed in sympathy with the bright laughter.
Rather than risk it, he watched the fruit vender outside the window beguile a customer. Another giggle and stifled moan floated down to him and he grinned, even though the laughter emphasized his own loneliness. It had been far too long since he’d had someone in his bed.
Fredrick looked up at the clatter of footsteps, distracted from his memory of lush lips, white skin, and wide, hazel eyes. He caught a glimpse of red hair and an embarrassed cheek before the gentleman crammed a hat on his head.
“Damned Wilkerson,” the man muttered as he passed him, face averted.
With conscious effort, Fredrick loosened his hold on his glass, but he had no way to stop the wild hammering of his heart. Wilkerson? Could it really be…? Perhaps not, but he had to know. Before he lost his courage, he stood and swallowed the last of the brandy, then crossed the room to the staircase.
He shook his head at his eagerness. It had been three years, after all, and they’d parted in anger. Would William acknowledge him? A man stepped onto the landing and Fredrick allowed his gaze to travel up the white spats and checkered trousers. Blood heated his face when he found the silk vest and shirt open at the throat to expose soft white skin.
A sigh brought his gaze up to the attractive face that stirred his dreams. Rich brown curls surrounded lovely hazel eyes and full, pouting lips. Panic swept the pretty face, then a delighted smile revealed the even white teeth that had nipped his collarbone on more than one glorious occasion.
“Freddie, is it you?”

DIANNE HARTSOCK is the author of m/m erotic romance, both contemporary and fantasy, the psychological thriller, and anything else that comes to mind. Oh, and a floral designer. If she can’t be writing, at least she has the chance to create through the rich colors and textures of flowers and foliage to bring a smile to someone’s face.
Currently, Dianne lives in the Willamette Valley of Oregon with her incredibly patient husband, who puts up with the endless hours she spends hunched over the keyboard letting her characters play.
Social links
Website: https://diannehartsock.wordpress.com/
Facebook: https://www.facebook.com/diannehartsock
Twitter: https://twitter.com/diannehartsock
Pinterest: https://www.pinterest.com/diannehartsock/
Posted by Diverse Reader at 9:53 AM