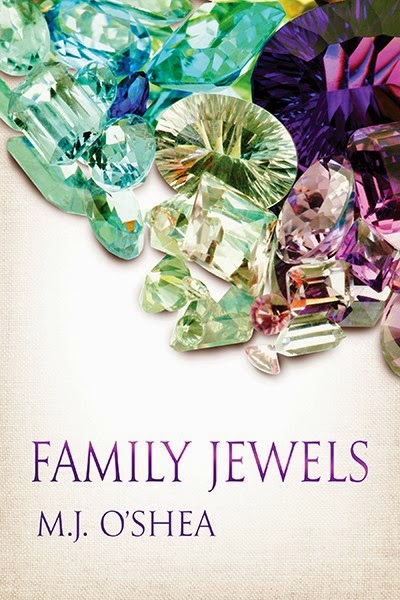 Title: Family Jewels
Author: M.J. O’Shea
Publisher: Dreamspinner Press
Cover Artist: L.C. Chase
Length: 200 Pages
Release Date: 27th April, 2015
Blurb: Corbin Ford, aka the Nightwatchman, named for the antique pocket watches he leaves behind at jobs, has been in the cat-burgling business for years. His father was. His grandfather was. His mother is still one of the most renowned thieves. Corbin likes his high-profile heists, priceless paintings from private collections, artifacts from museums, but his favorite? Jewels. Sparkly, beautiful jewels. If they’re famous, better yet.
Interpol agent Luke Eldridge has one goal and one goal only: to catch the Nightwatchman. Luke’s been after him for months, but getting the slip time and again is getting embarrassing. Luke has never even laid eyes on the bastard, but he’d happily strangle him. And then arrest him.
When Luke meets Corbin, the man of his dreams, he falls hard and fast… only to catch Corbin red-handed with his hand in a jewelry case at the scene of the highest-profile murder that’s rocked the international world in years.

“We’ve got something you need to see, Luke. You’d better get over here now.”
Luke Eldridge sighed into his phone. He glanced at the slices of pizza he’d just picked up from a food cart down on the Camden Lock. Looked like there was more cold pizza in his future. Typical. Irritating, but typical.
“Where are you?” Luke asked. He dragged himself off his soft leather couch. It made a disgusting squelching sound. Luke turned and halfheartedly wiped the seat off. He was tired from the run he’d forced himself to take, wet, and starting to chill as heat escaped through his damp T-shirt. The last thing he wanted to do was get back into a suit and go out in the cold he’d just escaped from.
Rob, one of his oldest friends from his days in the FBI academy, rattled off a very upper crust Kensington address.
“Jesus. Is this one going to make the morning press?” Luke asked. People who lived at addresses like that tended to make the news. His job was always harder when he had a ton of panicking socialites breathing down his neck guarding their beloved possessions. He didn’t need them or the news vans outside his crime scene.
“Probably. I’ll try to put it off as long as I can, but you know how it works. Just get your ass over here. Waterman’s on my dick already.”
“Sounds unpleasant.” Luke chuckled under his breath. “Does that surprise you?”
“Not really.”
Didn’t surprise Luke either. Their division chief within Interpol Art Crimes was all about the high profile cases. Art, jewelry, anyone with a Lord or Lady attached to their name. Even the odd Sir here and there. Cases like that were good press for the agency, he always said. Probably more like good for getting his face on the camera. Waterman was a media whore extraordinaire. Usually Luke didn’t care, but when they were in the middle of trying to open a case, it kind of pissed him off.
Luke felt it would be better to deal with the press after they had some solid leads, or, you know, someone in custody, but far be it for him to correct Waterman. He’d spent the last eight years trying to overcome the hereditary American-ness Waterman deemed a deep character flaw. If he started correcting the guy now, he might as well sign his own pink slip.
“I can be there in fifteen minutes. Waterman won’t even be done fixing his hair for the cameras,” Luke told Rob. He was already in his suit pants and shaking out his dress shirt. It felt a little stale from a long day, but he wasn’t going to put on a new one for a late evening call. If all went well, Luke would be back in his sweats and on his couch in less than an hour.
“Try to make it ten. I’m not in the mood to get my skin pulled off a strip at a time.”
He sounded like his typical sarcastic self, but the tone of his friend’s voice was different. Worried, maybe. “What’s going on, Rob? What are you leaving out?”
“There’s something weird about this one. Might cause us a lot of shit in the near future if I’m right.”
“Are you going to tell me or play guessing games?” Luke wasn’t in the mood to play anything. All he wanted to do was eat some still-warm pizza, crawl into bed, and sleep for days—or at least until his alarm went off at six. He’d gotten way too little sleep lately. He hadn’t gotten enough sleep in years.
Rob cleared his throat nervously. “You need to see this for yourself. Just get here, man.”
Luke disconnected the call. He finished dressing, shoved one piece of his pizza on a paper towel, and grabbed his keys. He could eat it on the way without ruining his suit. Even if he spilled, fuck it. Luke wasn’t going to sacrifice one more decent dinner to the cause.
It had rained earlier, and the London streets were still slick and dark, half frozen in the early spring chill, but at least it was quiet. The air was close to freezing, too. Unseasonably low temps, but sadly not by much. After all the years he’d been in London, the winters still got to him, cold and wet, the kind that seemed to creep all the way into the center of his chest—nothing like his childhood home in South Carolina or even Virginia, where he’d lived and worked his first few years out of the academy. Sometimes Luke missed the old optimistic years at Quantico. These days it seemed like the cold was impossible to shake. It seeped into his bones and camped out until nothing he did could warm him through.
I’m getting old.
The stone row houses slipped past, nestled together, dark on the outside like everything else, interiors shining and cheery against the insidious, creeping chill. Everyone who knew better was inside somewhere, enjoying dinner, relaxing with the people they loved. They didn’t look alone. He’d figured long ago his hopes for being one of them had probably passed. Luke loved his job, it was his life, but some nights he wouldn’t mind a break. Luke bypassed their unit’s Westminster offices in favor of going straight to the scene. He didn’t need anything but what he had on him. Hopefully he’d be in and out in time for the late news.

I had love for this book! It reminded me a lot of The Thomas Crown Affair and I did like that movie. Corbin comes from a bloodline of expert thieves so naturally he would go for the detective investigating the crimes he's committing. I had a gut feeling early on that there was no way this was going to end well. I won't give anything away but I'll say my heart ached a lot during this book. It was quite a bittersweet read for me but nonetheless amazing. MJ O'Shea wrote an intriguing, suspenseful, gut wrenching story. It will have your blood pumping and you will love every minute of it. I hope there is a book 2 to this story. I really think there needs to be in my honest opinion. Great read. 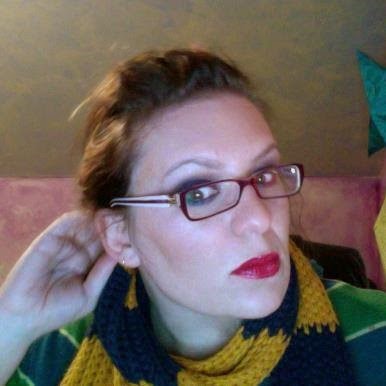 I’m Mj O’Shea:) I grew up, and still live, in sunny Washington state and while I love to visit other places, I can’t imagine calling anywhere else home.
I spent my childhood writing stories. Sometime in my early teens, the stories turned to romance. Most of those were about me, my friends, and our favorite movie and pop stars. Hopefully, I’ve come a long way since then.
When I’m not writing, I love to play the piano, dance, cook, paint pictures, and of course read! I like sparkly girly girl things, own at least twenty different colored headbands, and I have two little dogs who sit with me when I write. Sometimes they comes up with ideas for me too…when they’re not busy napping.

Get a chance to win a PAPERBACK of Family Jewels by M.J. O’Shea!
5 Runners Up get an e-copy each from the author’s backlist. Enter the Rafflecopter NOW.