Blurb: Bran Kendrick never expected to fall in love. He’s asexual, after all. What chance does he have of finding someone who’ll see past that? So when Malachi Warren catches his eye, Bran tells himself his crush will pass. Malachi disagrees. He has been attracted to Bran for some time, something he is delighted to find Bran reciprocating. They begin to date and feel their way through an intimate relationship that meets both their needs.
Suddenly Bran finds himself juggling a new boyfriend, a demanding job, and a college degree he’s not sure he wants, but he couldn’t be happier—until a series of seemingly random accidents befall Malachi. When they escalate, Bran realizes someone is trying to take away the best thing that ever happened to him, and he must scramble to keep Malachi safe while they search for the would-be killer.

EVEN IN early September, Vermont meant that Saturday morning dawned crisp and cool, and Bran tugged on his favorite beanie and scarf before making the trek across campus to the Grind, the tiny coffee shop that was his main source of income.
He couldn’t help the smile that flickered across his face when he walked into the kitchen, breathing in the smells of bread, cinnamon, almonds, and toasted sugar. He could feel the tension draining from his shoulders as he mentally flipped through the list of things he needed to do before he opened the café.
Start the blueberry muffins first. They can bake while I put together the topping for the coffee cake. Sweet-talk the cappuccino maker into starting up and leave yet another note for Naomi about getting a new one. Put the croissants in the oven last; I really need to set aside a couple of days to perfect making those myself so I can actually recommend them with a clear conscience. Call Katie and find out where the hell she is and why I’m here alone again. 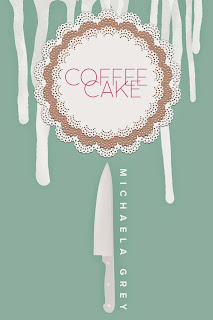 Michaela Grey told stories to put herself to sleep since she was old enough to hold a conversation in her head.  When she learned to write, she began putting those stories down on paper.  She and her family reside in the Texas hill country with their cats, and she is perpetually on the hunt for peaceful writing time, which her four children make difficult to find.

When she’s not writing, she’s knitting while watching TV or avoiding responsibilities on Tumblr, where she shamelessly ogles pretty people and tries to keep her cat off the keyboard.

Get a chance to win a signed paperback copy of Coffee Cake!
Enter the Rafflecopter NOW.
a Rafflecopter giveaway

May 11: Fangirl Moments and My Two Cents || Andrew Q. Gordon


May 12: Elisa - My reviews and Ramblings || Carly’s Book Reviews


May 18: Nessa’s Book Reviews || A Celebration of Books


May 21: Because Two Men Are Better Than One || Love Bytes Reviews