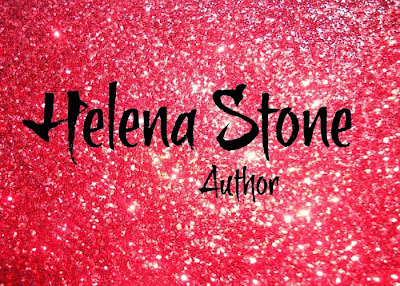 I got to know Helena long before she published a book. Just talking to her and reading her blog I knew she had a poetic way with her words. Her books Little Rainbows and Strangers in the Night (co-written with Jaycee Edward) prove... I was right! LOL. When she asked me to pre-read a story she wanted to submit, I was honored. After I read it I was floored! She's an up and coming author that shows no signs of slowing down but a ton of speeding up!

We are going to take a look at her work, and you can all read the interview I did with her and then one lucky person will win a signed copy of Little Rainbows. (No geographical restriction) 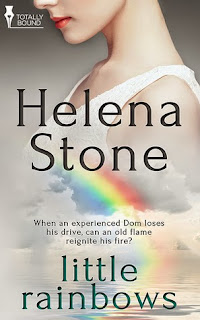 When Jason and Heather first meet they are young and sure they are wrong for each other. As a result they spend a summer admiring each other from a safe distance.

Twenty years later Heather is coming out of mourning, having lost her husband and Dom eighteen months earlier. Jason, now the owner of an exclusive sex resort on the west coast of Ireland, struggles with the loss of his desire to dominate.

Jason’s resort is about to celebrate its first anniversary and party planner Heather has been hired to create the perfect celebration. Their reunion comes as a big surprise to both of them. 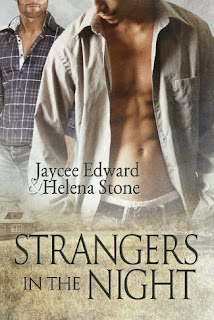 When Army veteran, Slade, stumbles upon an isolated cottage on a cold, dark, night, the young man finds more than just the shelter he’s seeking.

Former club Dominant Callum is surprised to find a handsome stranger knocking at his door but invites him in despite his reservations. A nightmare reveals Slade’s deep-seated emotional issues, and Callum knows he needs to get creative if he’s going to help Slade leave the past behind.

You write both Het and MM romance. Do you find a pull toward one more than the other?

Good question and one I haven’t figured out the answer to yet. My first book was Het and when I started writing it I had barely started reading MM so the thought of writing about two men never even crossed my mind. When Jaycee Edward and I decided to we wanted to write together we automatically turned to MM because that’s my co-author’s preferred genre. The advantage of starting off with this mixture is that I now know I enjoy writing both – just as I enjoy reading both. I have therefore decided to allow the characters to determine the genre of the book for me. Whoever talks to me loudest appears on the page, regardless of their gender.


When did you know you wanted to be a writer and what was the very first thing you wrote?

I’ll start with the second part of your question. My earliest memory of writing something I was proud of stems from when I was eight and I guess it was a form of fanfiction. I took the setting from my favourite book at the time and created an adventure of my own. The book in question was Dutch and, as far as I know, has never been translated but just in case anyone is interested (or Dutch) I’ll share the title and author; Jeroen en de Zilveren Sleutel (Jeroen and the Silver Key) by Daan Zonderland.


As for when I knew I wanted to be a writer… I guess the answer is never, or not until it had already happened. I wrote Little Rainbows as the result of a challenge made by online friends during NaNoWriMo in 2013. To be honest I never expected to finish the story, and didn’t even think about it one day being published. Now that I have not one but two books with my name on the cover, I have at last accepted that I am indeed a writer although the idea still takes some getting used to.


You have co-written with Jaycee Edward, would you co-write with anyone else or was it just a kindred spirit sort of thing?

Funny you should ask that. Jaycee and I are visiting ZA Maxfield’s blog tomorrow for her Sunday Brunch feature in which we answer the question: “If you could write with any author, living or dead, who would you choose?" I won’t give our answer in that post away here, but can say the following.


Jaycee and I only started writing together because neither of us could figure out how that might work. I think it took us about an hour before we realised that not only were we having great fun, we also had the makings of a good story, so we stopped calling it an experiment and started taking it seriously. Jaycee and I certainly are kindred spirits so I have no idea whether or not I could write with somebody else, but I don’t rule it out. In fact, when it comes to my writing I don’t rule anything out.


What is a subject you absolutely refuse to tackle?

That is something I’ve never thought about before today. My first impulse is to say there is nothing I refuse to write about. On the other hand, I rarely if ever read horror and can’t see myself ever attempting writing in that genre. Not because I don’t want to do it, but because I don’t think I know enough to be able to write it. However, it is quite possible that if you were to ask me this question again a year from now I would have a far more detailed answer for you.


Where does your inspiration come from, and when you don’t seem to have any where do you go to find it?

Little Rainbows was inspired by something somebody said about me when I was sixteen years old. I’d never forgotten the line and when I started writing that book I knew I had to incorporate it into the story. Strangers in the Night wasn’t really inspired by anything but more the result of an experiment conducted with Jaycee Edward. We just started writing – initially literally taking turns writing a single sentence – and the characters and story just presented themselves to us. The book I’m currently working on is once again loosely based on personal experiences, so I guess my inspiration so far has come from my own life.


If there was ONE place you could go for book research, where would you go?

I’m not sure there’s a single place I wouldn’t go for book research, but if you force me to limit myself to just one location I’d have to pick America. I would love to set my books there but right now I just don’t feel equipped to be able to pull that off without showing my ignorance. Of course, book research wouldn’t be my only reason for making the trip. I’ve now met so many wonderful Americans online that I live for the day I’ll be able to meet them face to face.


Are there any conventions you will be attending this year or next?

The plan is to attend both the Euro Pride Con in Munich in July and the UK meet in Bristol in September. To be honest, going to both events is a bit of a (financial) stretch. I’m not sure how I’m going to pull it off, but I’m hopeful I’ll find a way to attend both of them, as planned.


Do you have any charities that are near or dear to you that you’d like to bring attention to?


Yes and no. Right now most of my attention is focused on a cause which is not so much a charity but something I feel definitely deserves my attention and support – the ‘Vote Yes’ campaign for the equal marriage referendum to be held in Ireland on May 22nd. Apart from the fact that I can’t think of a single reason why only heterosexual people should be allowed to marry I am also convinced that a yes vote would be another step towards normalizing all relationships and therefore all orientations. And normalization will in turn lead to a decrease in discrimination, exclusion and violence.


In general I support charities that are in the most need at a particular point in time. Having said that, as long as I can’t afford to support every cause that touches my heart, any charity aimed at helping and supporting children will take preference.


Can you tell us about any projects you’re currently working on?

I’m about to start working with an editor on a new MM novel. This one is set in Dublin and is probably best described as a New Adult story. I don’t want to say too much more about it right now because I haven’t actually signed a contract yet. I’ve got various other projects – both Het and MM - waiting for my attention on my laptop. Whichever characters talk to me loudest will get my attention first.

I adore Helena and respect her greatly. She is not just a kindhearted, funny, amazing person but her talent is immense! You want to not only read her works that are currently available but you also want to keep your eye out for all her future projects.

For the giveaway (as stated above) Helena will snail mail one lucky reader a signed copy of Little Rainbows. It doesn't matter where you live. Just enter the rafflecopter below for your chance. Contest will go until May 22nd. Winner will be notified via email. PLEASE be sure to check your spam.

Thank you, Helena, for being here today and for all you amazing readers make sure you ALWAYS review! It matters!