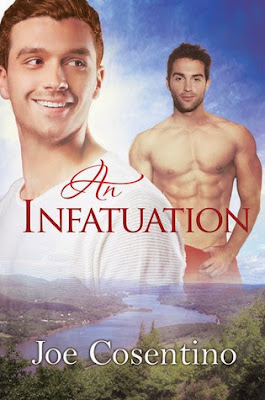 With his ten-year high school reunion approaching, Harold wonders whether Mario will be as muscular, sexy, and tantalizing as he remembers. As a teenager, it was love at first sight for Harold while tutoring football star Mario, until homophobia and bullying drove Mario deep into the closet. Now they’re both married men. Mario, a model, is miserable with his producer wife, while Harold, a teacher, is perfectly content with his businessman husband, Stuart. When the two meet again, will the old flame reignite, setting Harold’s comfortable life ablaze? How can Harold be happy with Stuart when he is still infatuated with his Adonis, his first love, Mario? Harold faces this seemingly impossible situation with inimitable wit, tenderness, and humor as he attempts to reconcile the past and the future.

One Friday afternoon I accidentally ran into my hero in the boy's locker room. I’d had enough of the big guys banging me into gym lockers, pushing me into cold showers, and hanging me from the gym ropes. So I was on my way to give Mr. Adoni a note from Dr. Dlorah excusing me from gym class for the remainder of the school year (due to my highly contagious disease being studied by my doctor in Guatemala, where he could not be reached for the next year).
The locker room smelled of an odd combination of soap, cologne, sweat, and desire. Mario was getting ready for football practice, standing at his gym locker without a combination lock on it. Nobody would dare to break into it (Except for me that one time I smelled his jock strap. Okay maybe it was a few times, but not more than ten.). Mario slid his T-shirt (red today) over his thick, black hair and threw it on the nearby bench. No longer harnessed by cotton, his arm, back, chest, and neck muscles swelled to full size. I was half hidden behind the adjoining row of lockers, wearing my usual green and blue flannel shirt and brown corduroy pants. Mario, who wasn’t looking in my direction, said something really beautiful to me that I will never forget. “Hi.”
“Did you just? Oh. Hi. Hello. Good afternoon. Nice to see you. I mean, change with you.” I looked down at the floor (but cheated a bit) as Mario kicked off his boots, slipped off his jeans then threw them in the lucky locker. His red underpants (briefs) revealed ample manhood. This is better than the newspaper’s underwear ads!
“Good gym class today with Mr. Adonis, I mean, Mr. Adoni.” Did I just say that? “Harold High.”
“Hi.”
“High.” How can I get my pulse down to 260?
“Hi.” Mario reached into his locker for his sweat clothes.
Shouldn’t people be doing that for you? “Oh, my last name is High. Like a kite.” How can I stop my arms from waving like an airport flagger on speed?
“Mario Ginetti. Like nothin’ else imaginable.” Mario smiled, revealing a row of perfectly white teeth, and held the sweat clothes in his hands as if he was mortal.
“I know. I watch your body play.” Why can’t I stop talking? “I mean, I watch you play … football … on the field … in your football outfit.” I feel like Michelangelo with his David!
As Mario put on his sweats, I continued to sweat.
“I'm voting for your body … I mean I'm voting for you for president of your … our … the student body.” I need my jaw wired shut. “I’m your lab partner in Chemistry class. Ms. Hungry’s class … I mean Ms. Hunsley’s class.”
His olive-colored face glistened as Mario’s face registered recognition—of me! “I thought I knew you from somewheres. Hey, thanks for doing the lab reports.”
“It’s my honor … I mean my pleasure. It’s fine. If you need help putting up posters for your campaign, I can … ”
Having just tied the laces of his sneakers, Mario stood absolutely still. He looked at me as if he was staring into my heart and somehow knew what I was feeling. “I gotta take a wicked piss.”
Can I watch?
“Thanks for helping me out, Buddy.” He slammed the locker door and left.
He called me, Buddy! My heart was as soft and silly as putty that Mario held in the palm of his hand like his soap on a rope.

I am not normally one to gravitate toward bittersweet fiction. I'm all about the happily ever after, smile, laugh, wipe the lingering tears, and have no doubts about life. When Joe approached me with this book I teeter tottered but then I said, "Put on your big girl panties, you just might like it." And I  more than liked it, I loved it. It's something we all can likely relate to. A first love, or infatuation, life moving on too fast, the what if's. Inevitably we grow up, move on, and live. Then bam the past smacks you in the face and you are suffocating from all the what if's and maybes. Harold and Mario broke my heart. Harold was beautiful and strong. He faced the inevitable with a head held high. Like I said, this is bittersweet but I laughed SO much reading it and that balanced out the tears. This was a first time read of Joe Cosentino's work and if this is anything to go by I'd say I'm a lifetime fan. If you were like me and swayed away from the bittersweet, not so typical HEA's, try this one. I think you will be left breathless with the reality and emotion behind An Infatuation.

I'm doing the giveaway a little different this time around. No rafflecopter. Per Joe's instruction here's how the giveaway will go:

You must answer this question in the comments section and PLEASE put an email address where I can reach you, should you win. Here's the question:

Think about your infatuation. When did it start? Who was it with? How did it end? Write about it in the comment section.

One person will be chosen, BY ME, based on the answer that tickles the libido the most. To win their own electronic copy of An Infatuation.

Contest will run until  Monday, May 25th. DO NOT FORGET TO PUT IN A VALID EMAIL WITH YOUR RESPONSE.

I can't wait to see what you all come up with!!! Thank you Joe for the amazing book! Make sure you all check him out!

Posted by Diverse Reader at 5:51 AM