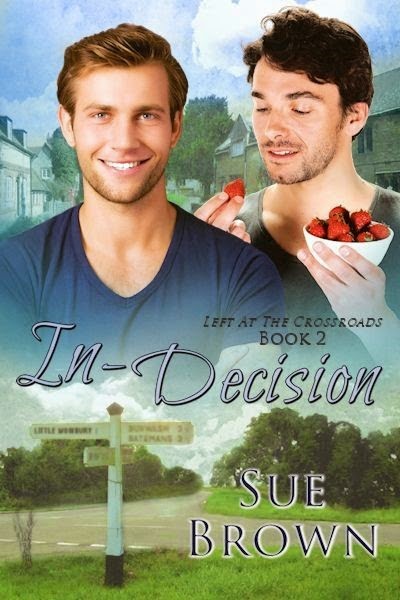 Title: In-Decision
Series: Left at the Crossroads #2
Author: Sue Brown
Length: 43,000 words
Release Date: April 15, 2015
Blurb: Little Mowbury is a sleepy English village deep in the Cotswolds. The kind of village where you’re only a local if your lineage can be traced back to the dinosaurs. Where you can find everything in the single village shop from morning newspapers to dry-cleaning, and getting your shoes mended. And, of course, where everybody knows everybody else’s business. It’s easy to find… you can’t miss it… just ask anyone and they’ll tell you… “It’s left at the crossroads.”
Eighteen months ago Jason Havers lost the love of his life and it's time to move on. Applying for the position of chef in a sleepy country pub, a million miles away from his previous life, may well be the fresh start he needs. His new employers immediately take him under their wing and before long he finds himself with a passel of new friends and a job he loves. What he doesn’t expect is Tom, a gorgeous midwife, who stirs up feelings he’s not ready to deal with.
But when someone from his previous life turns up in Little Mowbury, will Jason be able to keep them from revealing the secret he’s been keeping from those he’s come to love


In your book In-Decision the town of Little Mowbury is a small, sleepy town. Everyone knows your business. Have you ever lived in a town like this or had the privilege of visiting a place like that and was it like Little Mowbury?

England is full of these villages. I’m a townie. I’ve never lived in a pretty country village but I’ve visited them enough. Both my sisters have lived in similar places at opposite ends of the UK.

Un-Expected written by Lisa Worrall is also part of this series. Did you two have to work closely to make sure it all meshed or were you able to be more of a free bird with it?

Oh no, it had to mesh as I’m using her characters and she was very good at making sure my characterization was the same as hers.

As a writer you obviously overcome many obstacles. What would you say is the hardest one to jump over and stay on track?

Actually I’m going through it at the moment. I don’t want to be a Debbie Downer so I won’t mention it, but staying on track is really hard. I’m thankful for my friends who are supporting me.

What would you tell someone who was curious about this genre and wanted to start reading with in it? What advice would you give a newbie to the genre?

Talk to the readers. You need advice on a cowboy, a crime book or an historical? There’s always someone who knows. And if you want to write it? Go for it!

Can you tell us what conventions or retreats you may be at this year?

I’ve booked to go to GRL, but it is subject to finances in the middle of the year.

Can you tell us your favorite fan encounter?


I had my moment at GRL in 2012 when I met 3 people in the lift (elevator). One of them turned to the other two and said “This is Sue Brown.” Their eyes widened and they knew me! They knew my name. I can’t tell you how that felt.


For me, having a long chat with Bailey Bradford – also at GRL 2012 – was my total fangirl moment. I love her so much. I fangirl just as hard as all readers.

What’s the hardest and easiest part of writing a book?


Starting a book is easy. Getting through the mid-plot drop is the thing I struggle with every time.

If there was one thing you’d like your readers to take away with them from this book, what do you hope it is?

That life isn’t static. It moves on whether we want it to or not.

Can you tell us of your future projects?


I have the second one to The Last Wolf coming out next month and a prequel to Morning Report in June. Then a reissue of a Regency, The Layered Mask in July. I think that’s it so far.


Thank you for having me!

About the Author:
Sue Brown is owned by her dog and two children. When she isn't following their orders, she can be found plotting at her laptop. In fact she hides so she can plot, and has become at ignoring the orders.Sue discovered M/M erotica at the time she woke up to find two men kissing on her favorite television series. The series was boring; the kissing was not. She may be late to the party, but she's made up for it since, writing fan fiction until she was brave enough to venture out into the world of original fiction.

Giveaway: Win Un-Expected by Lisa Worrall (Book one of this series) also 3 runners up will win any of Sue Brown's books.

a Rafflecopter giveaway
Posted by Diverse Reader at 5:53 AM