Veil of Scars by J.R. Gray~ #Promo and #Review


A little bit about Veil of Scars:

Steven is tall, dark and damaged. He doesn't let anyone close, comfortable on the outside of normal life where he can hide his scars behind a wall so high that nothing gets through…except them. Despite a childhood marred with black and blue, he's survived and moved in with his two best friends, Sam and Charlie. Life should get better, but it was Sam who held him when the dark threatened to swallow him whole, Sam who gave him a place that felt like home, and Sam who knew every scar and every broken place.

And it's all been taken away with Charlie sharing Sam's bed.
Without his former comfort, Steven realizes what's been hiding in the deep corners of his heart, and the truth sinks him like a weight. He’s in love with one or maybe both of his roommates. Navigating unrequited love tears Steven apart and brings him to the precipice, and he has to choose: his feelings or Sam’s…and Charlie’s? 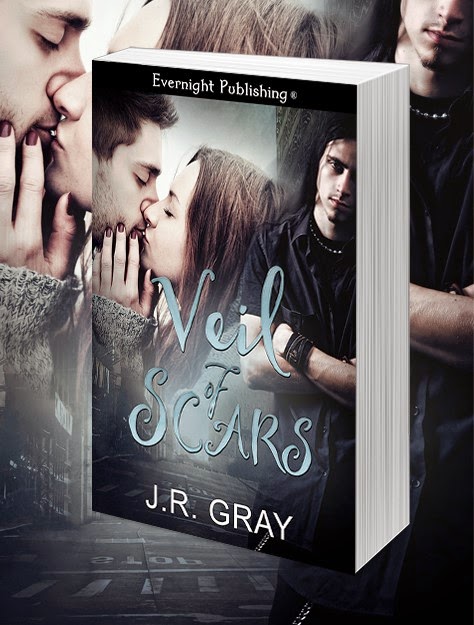 Here is a sneak peek from Veil of Scars:

"Charlie coming home from the party, too?" I didn't dare to hope.
“She didn’t go. She’s pulling an all-nighter in the library with a group for a project or something or other." He shrugged.
Maybe I would get a stolen night. One like old times.
We sat there for a while in silence, not quite wrapped up in one another but taking comfort from the other's body heat. I closed my eyes. Even on the sofa a night in his arms was bliss.
"Want to go to bed?" Sam asked, rousing me from the light sleep I had slipped into.
“Yeah, sorry." I got to my feet, cheeks flushing a bit, realizing I’d just fallen into something that wasn’t a reality anymore. In seven months there had been a few stolen nights with my best friend, but living with Charlie had put a stop to how we once were.
His brows fell, and he looked up at me before getting to his feet. I was turning to head to my room when he grabbed me by the hand, lacing his fingers through mine. I stopped, looking up to search his face.
He didn't say a word as he led me to the bed he shared with her. I couldn't help the smile that spread over my lips. The dark gave me the cover I needed to watch him pull the polo off his broad shoulders and cast it aside. I kicked out of my jeans and added my shirt to his on the floor, before crawling into bed.
The assured way he scooted in after me, coming up from behind to wrap his arms around my body, gave me a pain in the middle of my chest I couldn’t explain. I leaned back into his bare skin, and a calm washed over me. Within moments, it was like the nervous bundle of energy that had been wound inside me for months started to dissolve.
He tucked his head in next to my shoulder and whispered, “Goodnight," against my skin.
REVIEW
J.R. Gray is a new author to me. When approached with this story I was immediately taken with the blurb. I could tell right off the bat that this was going to be a very emotional ride. I was not wrong. Veil of Scars was a rollercoaster ride. Where there was pain there was love. I literally felt like I was taking a journey through a timeline, I felt like an outsider getting glimpses of the lives of people I had no right to know. By the end of the book I wanted to sit with all of them and say thank you. Thank you for letting me in and for feeling so deeply. I was invested throughout the entire story to the point I wished they were real. I cried with them, laughed with them, and loved right a long with them. My heart was wrapped in barbed wire, hugged to the point of blinding pain and released just before it became unbearable. This is a very angsty story. But worth every second. There's so much beauty to be seen. It was a fantastic read!
About J.R. Gray
When not staying up all night writing, J.R Gray can be found basking in the warm glow of the Miami sun, or at the gym where it's half assumed Gray is a permanent resident. A dominant, pilot, and sword fighting enthusiast, Gray finds it hard to be in the passenger seat of any car. Gray frequently interrupts real life, including normal sleep patterns, to jot down nonsense. The bane of Gray's existence are commas, and even though it's been fully acknowledged they are necessary, they continue to baffle and bewilder.
If Gray wasn't writing...well, that's not possible. The build up of untold stories would haunt Gray into an early grave or possibly a mental institution where the tales would end up on the walls in crayon and finger paint.

Other books by J.R. Gray

Posted by Diverse Reader at 5:52 AM