Blog Tour: The Eye and the Arm by Andrew Q Gordon #Excerpt #Giveaway 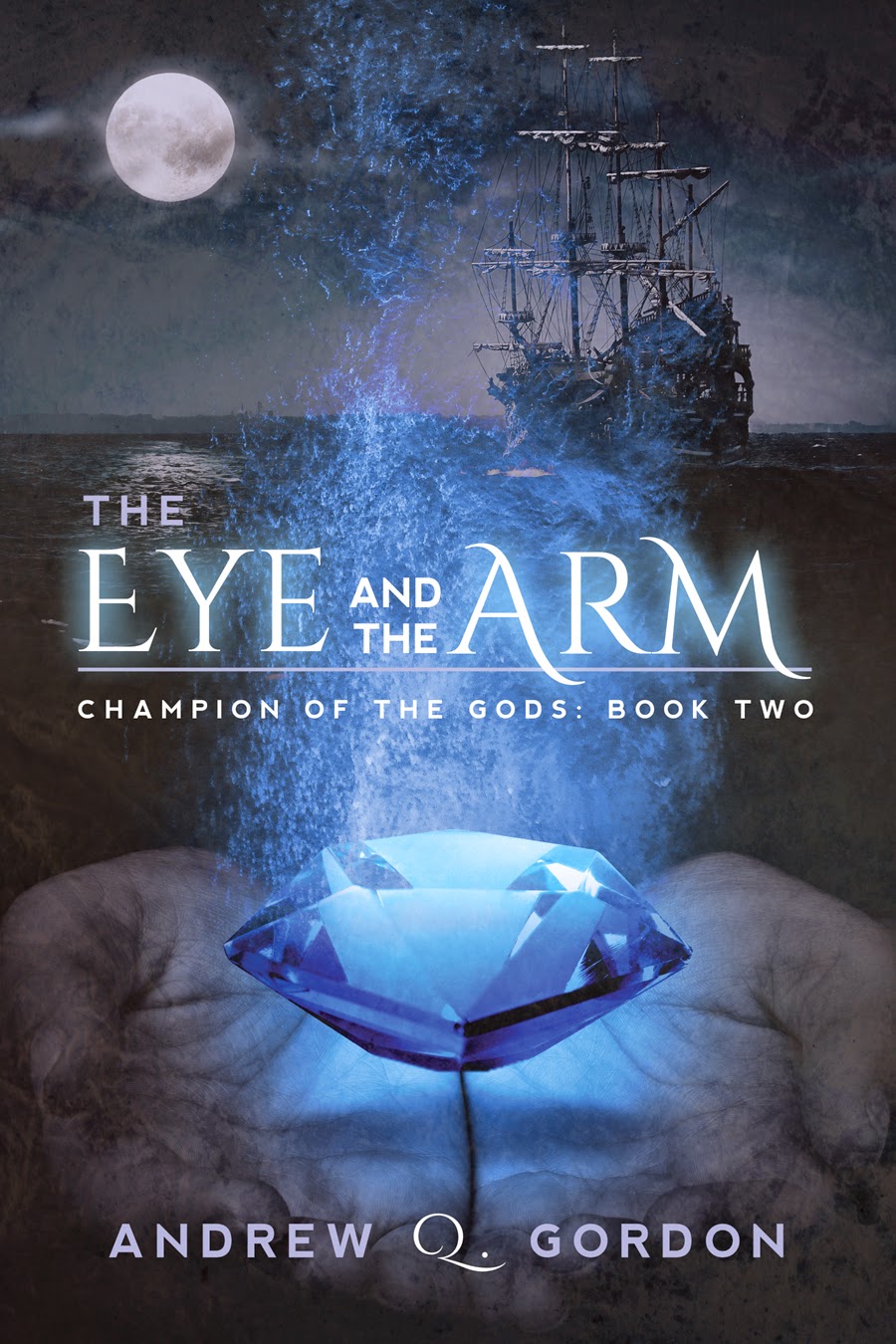 Title: The Eye And The Arm
Series: Champion of the Gods #2
Author: Andrew Q. Gordon
Length: 99,775 words/296 Pages
Release Date: April 14, 2015
Blurb: Champion of the Gods: Book Two
After defeating Meglar at Belsport, Farrell returns to Haven to recover from his injuries, but Khron, the god of war, has other ideas. He gives Farrell a new mission: free the survivors of the ancient dwarf realm of Trellham from their three-thousand-year banishment. To fulfill Khron's near impossible task, Farrell will need the help of his distance ancestor, the legendary wizard Kel. But Kel has been dead for a thousand years.
Farrell finds information hinting that Kel is alive, so he moves his search to Dumbarten, Kel's birthplace. To reach Dumbarten unannounced, Farrell and Miceral disguise themselves as mercenaries on board a merchant vessel. Their journey is disrupted when pirates attack their ship. While attempting to subdue the attack, Farrell is struck down by one of Meglar’s minions.
Unconscious and trapped in his own mind, Farrell's only chance for survival rests with Miceral and the peregrine king Rothdin entering his thoughts and helping him sort fact from illusion. To reach Farrell, they will need to rely on an untested spell from one of Kel's spellbooks. If they succeed, Miceral can guide Farrell home safely. If not, Farrell will destroy not only himself, but Miceral, Rothdin, and everyone around him.

After they cleaned up, Farrell created a dock out of green energy. He sat on the edge, removed his boots, and dangled his feet in the swift-flowing water.
“That water has to be ice cold.” Miceral sat behind him and hugged Farrell to his chest. “Why are you doing that?”
“Sure it’s cold, but after having my feet stuck in those boots all day, it feels wonderful. Even if I can’t do it for long.”
Leaning back, he enjoyed all the sensations of the day. Miceral kissed the top of his head and rested his cheek on Farrell’s hair. If he didn’t know better, Farrell would suspect the Six had conspired to make this day perfect just for him.
He stared at the water rushing over his now tingling feet. Reluctantly he pulled them onto the dock. After all the effort Miceral put into planning the perfect day, he hated what he needed to do next. He found a towel in his endless pocket and quietly dried himself. Instead of asking his partner to move back, he extended the dock another three feet and stretched his legs.
While the sun warmed his feet, he considered his words. “I’m not sure if this will ruin our day, but I finished reading Kel’s book.”
“Why would that upset me?”
He twisted until he faced Miceral. “I… we need to leave Haven.”
Miceral blinked but otherwise didn’t react. “Why?”
He took a deep breath and glanced at Nerti, who along with Klissmor had moved closer to the makeshift jetty. She gave him the barest of nods. “Two reasons. First, Kel’s book is clear. He collected items at the behest of the Six that They intend for me to have. I need to get them, and they are scattered around the world.”
“Do you know what he left you?”
“No.” He swallowed. “I don’t even know exactly where he left things.”
Miceral’s expression told Farrell he didn’t like what he heard. “Why would he do that? The book was meant for you. Why not just tell you?”
“He didn’t say, but I think it’s a test to ensure his heir is a powerful enough wizard.”
Miceral shook his head and stared at the water. After several long moments, he looked at Farrell. “What’s the other reason?”
“I need to speak to Kel.” He stared into Miceral’s blue eyes and fought the urge to turn away.
“How? Kel died two thousand years ago.”
“Kel’s still alive.” Farrell nodded several times. “He is. On a page near the end, he explains that he found a way to suspend his life functions to extend his life. There’s a small circle on the page. If it’s red, his efforts failed. If it’s green, he’s alive. The dot is green.”
Miceral’s jaw clenched and relaxed a couple of times before he looked over Farrell’s shoulder to Klissmor and Nerti. “Comments from either of you?”
“Farrell and I discussed this yesterday. I don’t entirely approve, but Klissmor and I believe it is Lenore’s wish that Farrell find Kel. For that reason we support his decision.”
Farrell watched as Miceral struggled with the news. He wanted to reach over and grab his hand, rub his back, anything to ease the tension, but he knew better. Miceral needed to work through it—without Farrell’s help.
“Do you at least know where we should go first?”
“Dumbarten, Kel’s birth place.” His smile quickly faded as he pressed on with what he needed to tell Miceral. “The first problem, however, will be getting there. I don’t know anywhere in Dumbarten that isn’t sealed off magically. So even if I had point of reference, I can’t open a Door.”
“How do you intend to get there?”
Before he could answer, Nerti did it for him, voicing the reason for her reluctance.
“By ship.”

ABOUT THE AUTHOR
Andrew Q. Gordon wrote his first story back when yellow legal pads, ball point pens were common and a Smith Corona correctable typewriter was considered high tech. Adapting with technology, he now takes his MacBook somewhere quiet when he wants to write.

He currently lives in the Washington, D.C. area with his partner of eighteen years, their young daughter and dog.  In addition to dodging some very self-important D.C. ‘insiders’, Andrew uses his commute to catch up on his reading. When not working or writing, he enjoys soccer, high fantasy, baseball and seeing how much coffee he can drink in a day and not get the shakes.

GIVEAWAY
FIVE Winners will win one e-copy of ANY book* each from DSP Publication’s backlist.
*Giveaway is of any currently released DSPP book, which excludes the books that are on pre-order and “The Eye And The Arm”.


a Rafflecopter giveaway
Posted by Diverse Reader at 5:37 AM