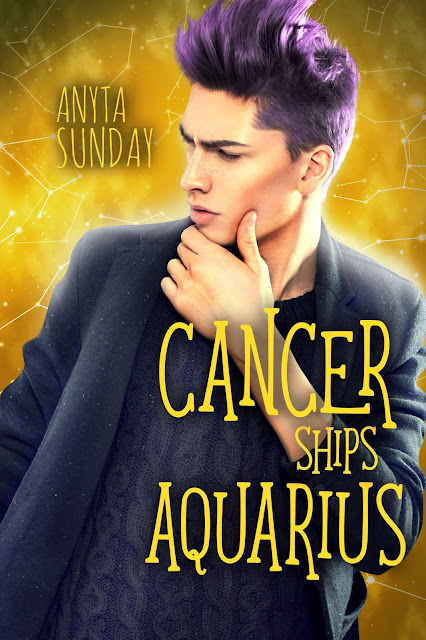 Dumped by the fifth girl in two years and abandoned by his best friends, Reid Glover is alone and in need of a home.
Desperate, he interviews to become a live-in manny aboard widowed Sullivan Bell’s yacht, the Aquarian.
The job? Not to look after thirteen-year-old Joanna. No, this child-mastermind needs Reid to befriend her dad, urge him to participate more in family life, encourage him to date, oh, and become his closest confidant and help him unleash his bottled emotions.
No pressure.
At least he’s not entirely out of his depth.
Okay, so he may have a slight aversion to the ocean. And possibly attract more than his fair share of misadventure.
But he is a pro at crying.
Watch out, Sullivan. Reid is on his way with a family-sized carton of tissues. He will help Sullivan through his fears. Will help him find love again.
Will absolutely not fall for him in the process . . .
Caution, Cancer, how long will you fool yourself?


Sullivan’s voice came out thin, stretched, exhausted. “Joanna . . .”
“Callaghan said Reid was as good as they come. You trust Callaghan’s judgement.”
Sullivan grunted.
“One-month trial,” Joanna said. “If you’re not convinced Reid is the perfect man, we’ll let him go.”
“Fine, okay,” Sullivan gave in. “Maybe he’ll fall overboard before that.”
“Dad,” Joanna warned.
“I won’t push him over.” Sullivan blinked toward Reid, who crawled off the couch and pulled himself up using the table leg. “God, I won’t need to.”
Reid managed not to wave a merry middle finger at his new boss. “I’m very partial to this vest. May I keep it?” 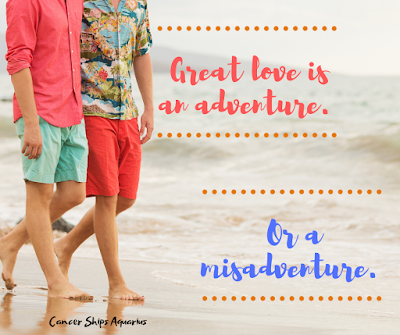 With a flash of inspiration, Reid stood. This was the perfect opportunity to forge a first connection. They’d be friends before he knew it. “Watch this, Captain.”
“Sullivan.”
“Yes, sir.” Grinning wickedly, Reid pinched the zipper of his hoodie and pulled.
Sullivan visibly stiffened—more with every tooth the zipper popped open. Maybe it was Reid’s angle or the light catching on Sullivan’s face, but Sullivan looked like he’d been carved out of the wall, one marble hand at his side, the other clutching the doorframe, his legs crossed.
Sullivan’s eyes flashed. “What are you doing?”
“Convincing you that you like me.”
“Keep your clothes on, I beg you.”
Reid laughed, prowling forward. Sullivan still didn’t move.
“Magic!” Reid opened his hoodie with a final flourish. He pushed out his chest and bared his bright yellow Recycling Rules T-shirt.
Relief hit Sullivan’s expression and Reid rolled his eyes. Sullivan might not be homophobic, but he was clearly uneasy about men joking around.
“See? Recycling,” Reid said, flattening the T-shirt across his not-quite-so-broad, but not shabby chest. “We have things in common.”
“Things might be a stretch.” 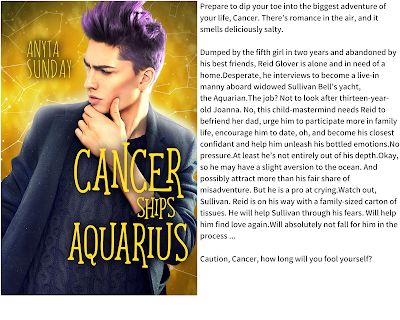 A bit about me, Anyta Sunday: I'm a big, BIG fan of slow-burn romances. I love to read and write stories with characters who slowly fall in love.
Some of my favorite tropes to read and write are: Enemies to Lovers, Friends to Lovers, Clueless Guys, Bisexual, Pansexual, Demisexual, Oblivious MCs, Everyone (Else) Can See It, Slow Burn, Love Has No Boundaries.
I write a variety of stories, Contemporary MM Romances with a good dollop of angst, Contemporary lighthearted MM Romances, and even a splash of fantasy.
My books have been translated into German, Italian, French, Spanish, and Thai.

Giveaway
Win 1 set of all five paperbacks of the "Signs of Love" series by Anyta Sunday, or 1 of 3 sets of the e-books.


a Rafflecopter giveaway
Posted by Diverse Reader at 9:12 AM