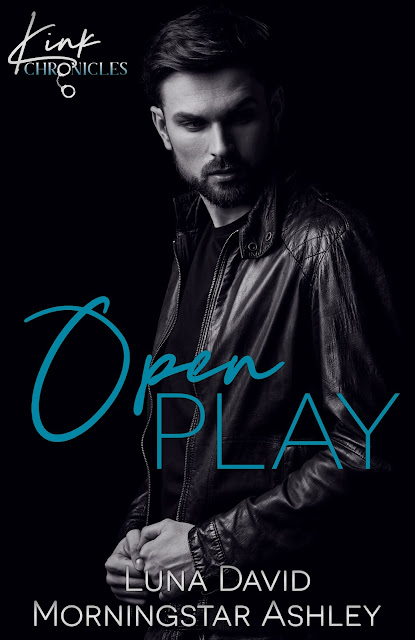 Misha
It’s been three years since I met him, since he became my everything. Sure, we play with others—but for one night only. Until Geoff, my Sir, my love, fulfilled one of my role-play fantasies. Neither one of us expected that involving Lukas, Geoff’s ex-lover and best friend, would give us both something we didn’t know we needed. Now we just have to make it work, because instead of one man owning my heart, one man giving me a world filled with passion and desire, there are two.

Geoff
My life changed the moment I saw him. He was the boy I needed, the man I wanted, and it’s been the just two of us ever since. Asking my best friend—a man I trust above all others—to help fulfill my boy’s fantasy, wasn’t a hard decision. But now we’re in a place I never thought we’d be. He’s sharing our bed and stealing our hearts. But he’s on the other side of the country, and we miss him every day.

Lukas
I’ve been stuck in a rut for far too long. My job and this city no longer hold my interest like they used to. The random boys I play with don’t fill that emptiness inside me anymore. I’m a Daddy who longs for a boy to take care of…to love. But when Geoff called me with an intriguing offer, I couldn't refuse. One weekend of fun wasn’t supposed to change my whole world, but now, I have some decisions to make. How do I find my place in the hearts of two men who have loved each other for so long? Because one thing is clear: They both own mine completely.

*This is NOT a standalone. This is the continuation of Misha, Geoff, and Lukas’s story in Open Encounters (Kink Chronicles Book 2).* 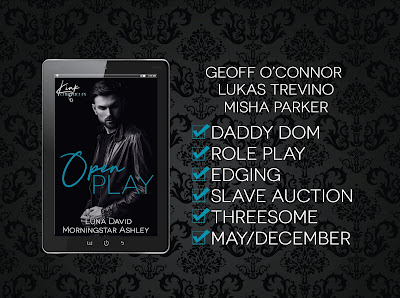 He grabbed the waistband of Misha’s pants and wiggled them down until they fell the rest of the way to his calves on their own. Slowly, Lukas thumbed the bare skin above the elastic waist of Misha’s tight underwear. He saw the goosebumps pop up all over the exposed skin and wanted to lick them.

Then he pulled those down as well, Misha was essentially half naked and trapped. Besides being in a room with two much larger men, he was hobbled by his pants.

He palmed his cheek, proving to himself how right the size and feel of Misha’s pert ass was. He’d wanted this boy since the first day he’d walked into his class. Fuck he was gorgeous.

When Lukas looked away from the naked bottom, he saw Geoff standing next to him eyes locked on the pale perfection and his hand clutching a wooden ruler. Geoff reached out, his fingers clenched in Misha’s hair, pulling and turning Misha’s head so he was looking toward Geoff.

He held up the ruler, showing it to Misha and Lukas saw the need shine brightly in his eyes. Misha wanted that ruler, wanted to feel the stinging pain it would bring him.

“Do you know what I’m going to use this for, boy?” Geoff asked.

Misha’s eyes went from Geoff’s to the ruler and back again before answering. “You’re going to spank me with it.”

Misha’s eyes closed as he was shuddering hotly. Lukas was nearing the end of his tether with need.

Morningstar Ashley
Morningstar Ashley is a transplant from New York, and now finds herself in the heartland of cowboys and longhorns—Texas. Armed with her imagination, wit, and trusty sidekicks in the form of her two crazy kids, devoted dorky husband, big lap dog, and rambunctious cats, Morningstar spends her time reading the books she loves, crafting her own characters, and arguing the merits of hot chocolate over the bitter brew known as coffee. (Hot chocolate wins, FYI.)

After a lifetime of trying to get people to realize her first name wasn’t Ashley, Morningstar decided the best way to settle the debate was to put her name on a book cover. Now she finds the accomplishment of publishing so satisfying her mind won’t stop creating stories of love across the spectrum of LGBTQA+.

Luna David
Luna David is a true romantic at heart who was fortunate enough to find and marry her soul mate. Most of the time she considers herself lucky to have been blessed with having g/b twins, but they’re giving her a run for her money. She’s a stay at home mom and an author, so when she’s not begging her little monsters to behave, you’ll most likely find her writing.
She loves anything book, coffee or dark chocolate related and can’t think of a better way to pass the time than to combine all three. She reads romance novels voraciously and while she prefers contemporary romance with strong Alpha males finding their soul mates, she’s a sucker for any well written, romantic story regardless of genre.
She created the Custos Securities Series because she loves to write what she loves to read. Her books feature strong dominant males and the men they would die protecting. Toss in some BDSM and kink and you’ve got her Catharsis Novel Series, The Boys Club Series, and Kink Chronicles Series. She loves nothing more than making her readers feel a wide range of emotions with her words. And she hopes you enjoy reading her books as much as she loved writing them. Happy Reading!