Everyone’s got one… But can they keep them?


Join us in celebrating the re-release of the Forbes Mates books! The celebration tour has a $25 Amazon Gift Card giveaway and lots of fun excerpts from the books. Devotion is also on sale for 99¢ for the whole tour, so you can get started on the series!

You can follow the tour here (http://www.grace-duncan.com/fm-tour) – hope you have fun! 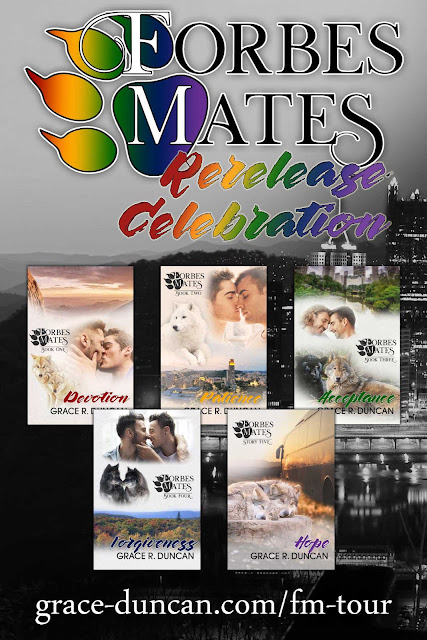 Ben’s love can help Eric find the forgiveness he needs… if Eric can accept it.
Nine years ago Eric Joyce went wolf when his chosen mate broke the bond, and he hasn’t walked on two legs since. Convinced he lost his friends when he ran out on them, he cut himself off from the pack. But a surprising visitor prods him back down the mountain, and he finds himself welcomed warmly.
Ben Arellano grew up in Texas with a human Catholic mother who didn’t understand a thing about wolves–and didn’t try to learn. He’d spent his whole life being told his wolf was a demon that needed to be exorcised, surrounded by a wolf pack made up of good ole boys who had no tolerance for his Mexican ancestry or his bisexuality. When he’s given the opportunity to relocate to an accepting pack in Pittsburgh, he jumps at the chance.
When Eric and Ben meet for the first time, neither is ready for it. Where Ben expects rejection, Eric is convinced yet another mate will leave, break the bond, and put him through the same hell all over again. Can they get past their reservations and have a happily mated life? 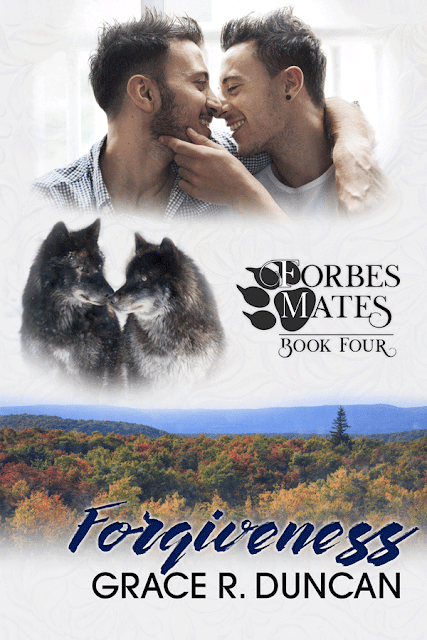 Eric nodded. “Uh, so… hey, could we get some food? I’m starving.”
Ben smiled, letting the conversation go. “Sure. Is there anything you’d like? Since you have not eaten it in nine years….”

“Taco Bell,” Eric said, staring at the big pink and purple sign across the street.
“Um….”
Eric turned and blinked at Ben over his hesitation. “What’s wr—oh!” He dropped his face into his palm. “Wow, that was good, Eric. Let’s ask your Mexican mate to take you to the most fake Mexican restaurant on the planet.”
Ben threw his head back and laughed. “It is okay, cariño. If that’s what you really want, I will take you. Just so you recognize it is not really Mexican food.”
Eric grinned. “Nah, I know that. And it’s okay. I’d be just as happy with, like, a Big Mac or something. I mean, none of it’s real food, anyway, you know.”
Ben nodded. “True.” He started the car and backed out. “Do you truly want McDonald’s?”
“I do. Honestly, I’m fine with that. I don’t mind not having Taco Bell. Besides, as much as we’ll probably stick together, there will be times we’re apart. I can save my heretical eating for then.” Eric winked.
Ben laughed again. “Very well.”
Neither spoke as Ben navigated traffic through the parking lot and busy streets. As they approached the drive-through menu, though, he turned to Eric. “You should probably cover your nose.”
Eric raised his eyebrows. “You think so?”
Ben nodded. “Yeah. It’s going to be strong here. Trust me.”
Eric shrugged a shoulder but did as Ben suggested. The second the window was down, he was glad he had. The exhaust and overabundance of restaurant smells hit him hard, even with his hand over his face.
“Are you sure you want a Big Mac?”
Eric nodded. “Fries too.”
“Got it.” Ben turned to the menu board, and Eric did his best to simply ignore the smells and sounds around him, focusing instead on Ben’s scent and voice. Ben put in the order—for two of the same of everything—and Eric worked on filters again.
He supposed he should have more patience with himself, but it was really getting to him that the reminders of Ben as his mate still bothered him. The simple idea that Ben’s scent, voice, and touch were the only things that didn’t make him nuts shouldn’t get to him so. He wanted to forget all that, wanted to just be happy that Ben was there, that he had a destined mate at all. But the fear that it’d end just like it had with Kim still lurked inside him.
Shaking his head at himself, Eric pulled his wallet out and removed some of the money Tanner had given him that morning, a minuscule part of the balance he’d learned about.
When they got to the payment window, Eric handed the money to Ben, glad when he didn’t even say a word, simply passed it over to the clerk. She made the change, and they moved on.
Ben rolled his window up, and Eric breathed a sigh of relief. “How are you?”
“Annoyed,” Eric said, sighing. “I’m done with the lack of filters already.”
Ben chuckled. “I can imagine. I can only imagine, but I forced myself to unfilter earlier, so I have a small idea.” He shook his head. “I do not envy you, cariño.”
Eric smiled, leaned in, and kissed Ben on the cheek. He paused to take a deep inhale of Ben’s scent. “Gods, I could smell that all day,” he whispered.
Ben kissed his temple, and Eric sat back. “What do I smell like to you, cariño?”
“Spice carried on a fresh breeze,” Eric said, then blushed.
Ben just grinned. “So you’re a poet.”
Eric’s color got worse. “Hardly. I don’t know where that came from.” He shrugged.
Ben kissed his cheek. “I like it, cariño.”
“What do I smell like to you?” Eric asked, tilting his head.
“Leather. Something sweet, and… home.”
That did all sorts of crazy—but good—things to Eric’s insides. “I’ve never been someone’s home before.” He dropped his gaze to his hand. “None of this feels even remotely familiar,” he confessed. “Before… I mean… I have to admit.” He looked up and met Ben’s gaze. Ben nodded and Eric sighed. “I did love her. I don’t… I don’t think it was what it should have been, not to be together like we were supposed to be.”
Ben didn’t speak for a long time. “My wolf might not understand. But I do. What happened before… you cannot help that. And I understand you cared for her. I hope, someday, you can love me.”
Eric swallowed. “I… I think I will. I don’t… fuck.” He took a deep breath. “I am frustrated with myself that I can’t just let go and let it happen, you know?”
Ben nodded. “I know, cariño.” He reached up and brushed a thumb over Eric’s cheek. “Give it time. I have only been here a day.”
Eric blew out a breath. “I know. This is only my third day back. I’ve never been the most patient person on the planet.” He chuckled. “Especially when it comes to my own shortcomings. I’m impatient with my impatience.”
Ben laughed as he pulled up to the second window. “That’s not so bad, really.”
Eric focused on covering his nose and working through the smells, putting his frustration with himself aside. He tried to concentrate on not smelling the wrong things and felt better when he could take his hand away from his nose and not be overwhelmed. He was going to have to thank Chad for that advice. 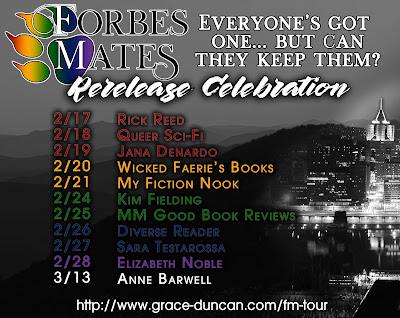 a Rafflecopter giveaway
Posted by Diverse Reader at 10:39 AM