Release Day Blitz: Hard To Get by Jaclyn Quinn #Excerpt 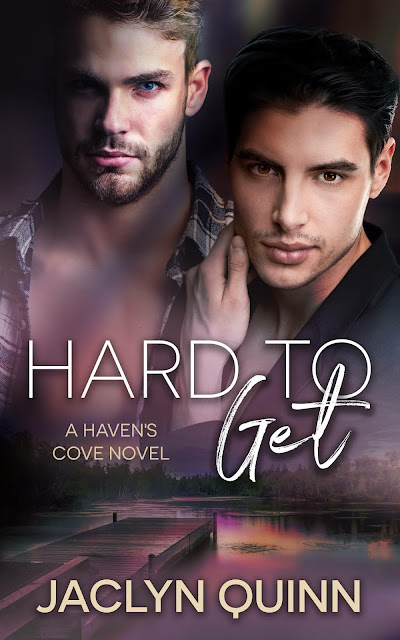 Gabe D’Angelo has it all. Designer clothes, luxury cars, a cool confidence most would envy, and a never-ending supply of money—and men. When he arrived in Haven’s Cove to be there for his best friend, he never imagined he’d end up extending his stay indefinitely. Small town living isn’t so bad after all, and the views are magnificent—especially the view of a sexy, rugged blond. But when that mysterious, brooding man refuses all Gabe’s advances, he is forced to take a step back and truly look at the person he’s become.

Nate Black moved from Boston to Haven’s Cove for his family. He’s missed small town living and the simple, tranquil life that comes with it. What he doesn’t bargain for is the pushy, spoiled playboy who’s set his eyes on Nate as his next conquest. Knowing this man has the potential to crack the foundation of his quiet life, Nate will do everything he can to protect his safe, closed-off world.

Is one man worth loving? Is the other worth the sacrifice? Or is the love they’re searching for not just hard to get but completely out of reach? 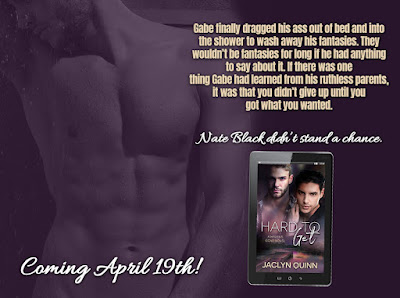 Gabe sighed again, rolling his eyes. “My God, did the four of you have a Nate Protection Plan meeting I wasn’t invited to? I assure you, I’m harmless. I’m also pretty sure that Nate is a grown man who doesn’t need protection—unless it’s a condom. Then I fully condone it and will even offer my services in the Sheathing Department.” Gabe winked. “He can thank me later.” He held the beer bottle in the crook of his left arm and patted Jonah’s cheek. “Wish me luck.” Then he walked around Jonah and headed for his target.
Nate didn’t disappoint tonight; that was for sure. The guy made a pair of jeans the sexiest material ever to fit on a man’s strong body. Long legs, strong muscled thighs, unmistakable well-endowed bulge covered in denim. It made Gabe want to get down on his knees and find out what hid beneath the denim—with his tongue. Nate’s broad chest was screaming to be released from the tightly stretched black cotton T-shirt. Tell me the man doesn’t know what he’s doing to me in that outfit?
“You’re staring.” Two plump, well-defined lips uttered the words—none too kindly—and Gabe blinked, snapping out of his stupor.
Shit, was there drool on his chin? He’d been undressing the man with his eyes. “Sorry, bad habit. Another beer?” Gabe held up the bottle to Nate, and as he expected, was quickly shot down.
“No, thanks,” Nate said, obviously irritated, not even looking in Gabe’s direction.
“Tell me, Mr. Black, do you have a problem with all tall, dark, and handsome men, or is it just me who ruffles that blond hair of yours?” Gabe asked. His voice was low and seductive as he moved in a little closer to Nate.
Nate turned his face to look at Gabe and snickered. “Tell me, Mr. D’Angelo, do you have a problem with rejection in general, or is it just the fact that I’m not interested that rubs your conceited ego the wrong way?”
Touché.
Gabe smiled wickedly and moved a little closer, letting his hot breath caress Nate’s ear as he whispered, “Trust me. There isn’t a wrong way to rub me. When you’re ready to admit you want to, we can make this interesting.”
Nate moved in even closer, the heat from his body making Gabe’s cock dance with glee. Nate’s lips and the scruff of his goatee brushed up against Gabe’s ear, sending a delicious chill down his spine. “Why don’t you hold your breath,” Nate pulled back abruptly, “and see where that gets you.” With a look of disgust, he walked away.
“Well, that went well,” Gabe said to no one in particular. He had to laugh at the situation or he’d explode. If he were smart he’d get over it, realize the man was a waste of time, and find someone more willing to tickle his fancy—and other parts of his anatomy. Hell, he could be back in the city with a man filling him so good by the end of the night.
Too bad he wasn’t a smart man.

When I’m not creating, you can find me reading books from my favorite authors. I’m a hopeless romantic, starving for passionate characters and always craving that happy ending, whether in reading or in writing my own books.

Posted by Diverse Reader at 8:02 AM