I’ve been writing for publication since 2011, and since then I have danced around the sub-genres of gay romance, following the story wherever it takes me. I suppose of all the genres, I’m probably best known for is historical, in particular the Crofton Chronicles series set in Elizabethan England. But I was surprised to realize that it’s been nearly 4 years since I last published an historical and now I’m back with a tale of pirates set in 1718, a new era for me.

The thing about historicals is they take a lot of research, but also an author can fall into the trap of having to write every last thing they’ve uncovered into the story, running the risk of turning a romance novel into a dry history text book. It’s a balance, and one I enjoy. Delving back into the world of pirates, and early Georgian society has been fun. I’ve felt my love of historical research return and it has spear-headed me into researching other eras (but that’s a whole different set of stories). But writing pirates has another spin, it’s about larger than life characters, swashbuckling and daring deeds. There’s a romance about pirates that needs to transcend the setting, taking the reader further than the pure historical period yet still hold true. I tried to keep the settings real, the facts about the Royal Navy at the time, and even some of the people are real, but there is also a huge swathe of fantasy and expectation that comes with pirates. I’ve had a ball with Captain Merric, creating a larger than life pirate and a stubborn naval officer, and I hope I’ve manage to capture the period but delivered the expectation of pirates. Prepare to have your timbers shivered!

Drop a comment below to tell me why you love pirates and be entered into the giveaway to win a copy of an ebook from my backlist (excluding the Crofton Chronicles bundle).

“What do you want doing with your new friend?”

He’d expected someone to ask, the crew were by nature curious. Some of their prisoners had been happy to play with more than the captain. The idea of any of his men touching Daniel made a knot of hot anger burn in his stomach. That would not be tolerated.

“I have put him in the cabin next to mine.” Edward fished a key out of the pocket of his coat. For now he’d locked Daniel away, mostly for his own safety, although Daniel would not believe that. “Give him some fresh clothes and something to wash with.”

Edward grinned. “You know my tastes, Brillack. Captain Horton is not only a fine morsel but a challenge.”

Brillack smirked. “We both know you don’t like to back down from one of those.”

He’d invited Brillack to join his crew after a brawl where they’d both come out unharmed, and their pockets full of other people’s money. Brillack was no more trustworthy than the next pirate, but while the Opal was successful then the crew would remain loyal—Brillack was a competent first-mate, and if truth be told they had become firm friends over the years. “If he doesn’t cause any trouble, we’ll set him down at Jamaica, but you must be as curious as me as to why he was set adrift and where his ship is?”

“If I’m not mistaken, his ship is—was—HMS Expedience. I make it my business to know the naval vessels in the area, and Horton is a well-respected captain.”

“Then what was he doing in a rowing boat with no sign of his ship?”

“Dunno, but I bet we can find out.” Brillack grinned. “There’s not much in the way of information that can’t be bought.”

“I hope I can be persuasive in other ways to get our dear captain to spill his secrets.”

Brillack rolled his eyes. “From what I’ve heard, you’re more than persuasive.”

“I enjoy the spoils of my position.” 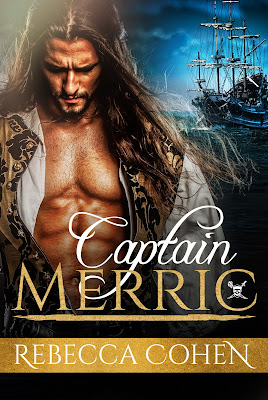 A tale of pirates, lost love, and the fight for a happy ending.

After he’s set adrift and left to die by his mutinous crew, the last person Royal Navy officer Daniel Horton expects to come to his rescue is Captain Merric. An infamous pirate, Merric is known as much for stealing his victims’ hearts as their jewels. Daniel’s world is about to be turned upside down when he recognises Captain Merric as none other than Edward Merriston, someone he thought he'd never see again.
Edward can’t believe Daniel Horton is aboard his ship. While Edward is willing to do anything he can to get a second chance at their happy ending, Daniel isn’t interested in digging up the past. But Daniel is one priceless treasure Captain Merric isn’t about to let go of without a fight.

Captain Merric first appeared as short story in a pirate-themed anthology. Now completely rewritten and extended he is ready to set sail again. 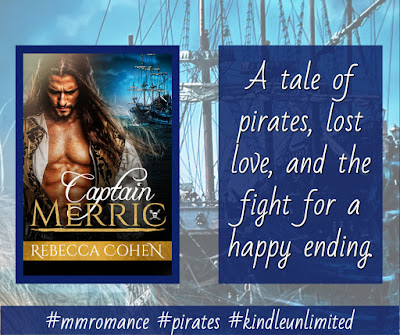 Rebecca Cohen is a Brit abroad. Having swapped the Thames for the Rhine, she has left London behind and now lives with her husband and young son in Basel, Switzerland. She can often be found with a pen in one hand and a cup of Darjeeling in the other.

Posted by Diverse Reader at 9:47 AM