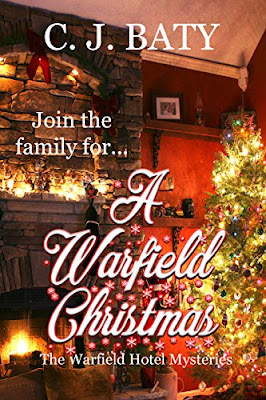 Peter Warfield wanted a Christmas like none before. A celebration of putting the past behind them. Leaving Bradley Warfield and Moses Lee buried in the past. A new tradition of love and happiness for future generations.
But, no one was cooperating.

You are invited to celebrate the holidays with Peter, Sally and their daughter, Lily, at the Warfield Manor. There’s no murder to solve or a criminal to catch, but there are secrets to be revealed.

Justin Warfield and Marcus Drummond aren’t speaking or telling anyone else what is going on. Damien Fitzgerald and Robert Wyler have been out of the country but is that really the truth. Sally’s been trying to tell Peter something important for weeks but he’s so wrapped up in Christmas, she can’t get through to him.

Catch up with the rest of the Warfield extended family: Richard Brooks, Daisy Lee and their son Alexander, Krystal Smith, Winnie, Michaels and all the rest. One thing’s for sure, it will be a Christmas the Warfield’s will never forget.

This book will be more enjoyable if you have read any of the other Warfield Hotel books. Like a beautiful package wrapped up with a shining bow on top, there's a happy ending for all.

C. J. Baty lives in southwest Ohio. Her heart, however, lives in the mountains of Tennessee where she hopes to retire some day. The mountains have always provided her with inspiration and a soothing balm to the stresses of everyday life.

The dream of writing her own stories started in high school but was left on the back burner of life until her son introduced her to fan fiction and encouraged her to give it a try. She found that her passion for telling a story was still there and writing them down to share with others was much more thrilling than she had ever expected.

She has a loving and supportive family who don't mind fixing their own meals when she is in the middle of a story, and a network of friends who have encouraged and cheered her on in her quest of being an author.

One thing she has learned from life and she is often heard to say is: “You are never too old to follow your dream!”

Posted by Diverse Reader at 5:10 AM