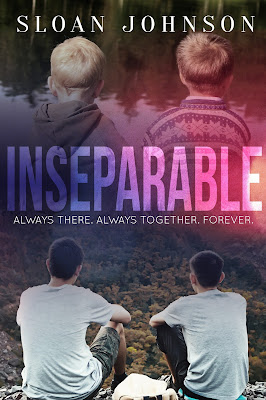 Trevor and Gabe never knew life without the other. As only children, they grew up as close as brothers, but their love grew to something more. Something they couldn't talk about because their parents wouldn't understand.


Gabe is gay and unapologetic about his sexuality. He refuses to live his life in the shadows, but that doesn't mean he isn't harboring secrets.

Trevor is his parents’ miracle child and he doesn’t want to hurt them. Coming out, admitting he's in love with Gabe, could ruin everything.

Heading off to college was supposed to finally free them to be together, but nothing is as easy as it seems. Can they find a way to navigate this new world, living and loving openly?

Sloan Johnson is a big city girl trapped in a country girl’s life. While she longs for the hustle and bustle of New York City or Las Vegas, she hasn’t yet figured out how to sit on the deck with her morning coffee, watching the deer and wild turkeys in the fields while surrounded by concrete and glass.

When she was three, her parents received their first call from the principal asking them to pick her up from school. Apparently, if you aren’t enrolled, you can’t attend classes, even in Kindergarten. The next week, she was in preschool and started plotting her first story soon after.

Later in life, her parents needed to do something to help their socially awkward, uncoordinated child come out of her shell and figured there was no better place than a bar on Wednesday nights. It’s a good thing they did because this is where she found her love of reading and writing. Who needs socialization when you can sit alone in your bedroom with a good book?

Now, Sloan is a tattooed mom with a mohawk and two kids. She’s been kicked out of the PTA in two school districts and is no longer asked to help with fundraisers because she’s been known to lose herself with a good book and forget she has somewhere to be.