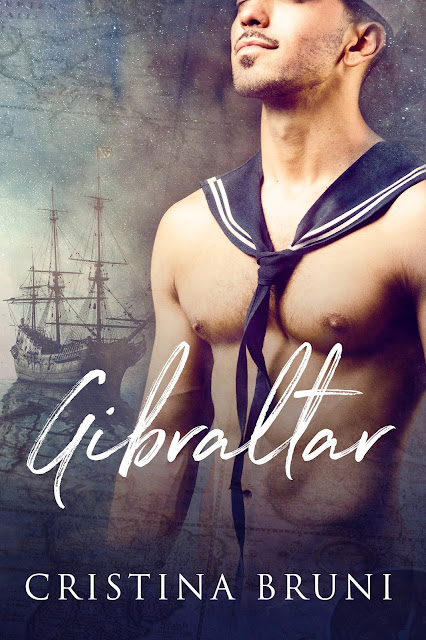 Blurb
Benjamin Scott is a fair man and a fearless sea captain, but his heart is broken. A while back, during a fierce battle in the West Indies, he witnessed the death of his best man, Jack, who fell into the sea before Ben had the chance to confess his love to him.
In Gibraltar, he happens to run into a stranger, John, who bears an uncanny resemblance to his lost love. A friendship grows between the two men, soon turning to love. This time, will Benjamin find the courage to confess his love, before losing John as well?

“John moved closer and pressed his mouth on Benjamin’s again. He explored his hot lips, tasting, nibbling. John’s tongue pushed against Ben’s teeth, sweetly, like a gentle greeting. Benjamin moaned in desire, and felt a twinge in his loins as his lips parted in surrender.
It felt like the world around them had stopped spinning, and they were still moving only because of inertia, waiting to run out of energy before stopping.
John was soft and inviting. Ben lost himself for a moment. It was pure desire and pleasure. Suddenly John bit his lip, and that mild pain broke the spell. Benjamin suddenly shook and jumped to his feet.
“What are you doing?” His voice was panicky, an octave higher than usual.
“I’m kissing you.”
“Why in the world would you do that?” the captain asked, overwhelmed by a dizzying swirl of shock and joy. It was what he wanted, exactly what he’d been hoping for since time immemorial. So, why in the hell was he so terrified?
“I thought that we. . .” John broke off, biting his lower lip. If he was trying to find the right words, he apparently didn’t succeed.
“Well, you thought wrong!” Benjamin replied, using his last shred of resistance, struggling to not surrender completely to the pleasures of the flesh. He quickly backed away, collapsing on the chair in the far corner of the room.
“If I’ve upset you somehow, I’m sorry.” John stared at his hands. “I hope you can forgive me. But the. . . relationship you and your friend shared was so special—I thought maybe we could also. . .” The words died in his throat, like snow melting in the sun, and he couldn’t continue.
Benjamin started babbling nervously. “You have no idea what it was like. You weren’t there. And you could never replace him anyway!”
John suddenly looked up, and the two men’s eyes locked. The deep sorrow and disappointment Ben saw in John’s eyes made him realize how harshly and foolishly he’d just spoken. The words had just spilled out, and now he desperately wished he could take them back.”
Amazon

Cristina Bruni lives in northern Italy with her husband and their child. She’s already published in the US the M/M sport novel “Seven Days” by JMS Books and many other novels with the Italian publisher Triskell Edizioni. Since she was a young girl, her biggest wishes were being a mother and an author and now, after fighting for it for years, she finally succeeded in both. She loves travelling abroad, going to the cinema, reading Sherlock Holmes, luxury bags and playing tennis and golf. She’s madly USA-sick and UK-sick. She made her debut writing fanfictions and, now, her new wish would be writing love Male-to-Male stories for the rest of her life and living on a beach in Hawaii.
Maybe dreams will come true again, sooner or later…

Posted by Diverse Reader at 5:35 PM