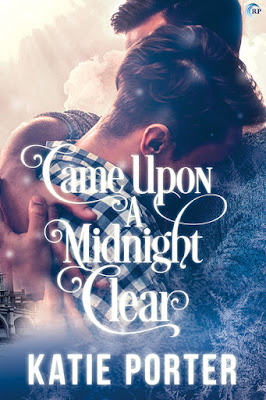 
Up-and-coming film producer Kyle Wakefield lives in the closet rather than risk the wrath of his influential, conservative parents. The only time he took a chance on love was a tempestuous teenage affair with Nathan Carnes. But when Nathan proved himself hell-bent on self-destruction and wound up in prison, Kyle closed off his heart.

Almost a decade later, Kyle’s production partner hires Nathan’s stunt company, Second Chances, to work on a big-budget action film in London. Nate is floored by his explosive reunion with Kyle. But he sure as hell isn’t surprised that Kyle still treats their mutual needs—and Nate—like dirty little secrets.

As the London holiday season casts its dazzling spell, the two men find themselves falling in love again. Kyle is one breathless kiss away from declaring himself to Nate—and to the world—but they cannot ignore secrets borne of youthful mistakes. To protect their bright new future, Kyle and Nathan will need all their passion and trust . . . and a little Christmas magic.


Publisher's note: This is a lightly edited reprint of a previously published novel.

At intermission, he led Nate around a spiraling ramp to the concession area. That Nate stood shoulder to shoulder with him, their hips near enough to flirt, was making Kyle feel younger and more relaxed than he’d felt in years. Steph had always said he was the oldest twenty-eight-year-old on the planet, but he hadn’t realized how right she was until right then. Nate breathed life into him.
“What, popcorn or something?” Nate asked.
“Better.” Just then, his cell phone buzzed in his pocket. He pulled it out to see the display. His stomach took a sickly flip, but he pressed the red button to reject the call.
“Who is it?” Nate asked.
“My mother.” Two swipes later and his phone was on airplane mode. Once she got it in her head that it was time to talk to Kyle, she would call six times in a row. Literally and exactly. Then she’d do it at the same time the next day, then the next, unceasing, until she got a response. No distance seemed far enough. He pushed away thoughts of them and made himself smile. “Come on. We’re going to miss our snacks.”
Ten minutes later, barely in time to make the purchase before the lights dimmed again, Kyle came away with his prizes.
“You are insane.” Nate tossed his gaze around the massive concession area as people filed back around the ramp toward the body of the theater. “No, these people are insane.” He took one of the small white containers Kyle handed him. “I mean, ice cream? Are you serious?”
“And tea.”
Nate trod behind Kyle, still wearing his mixed expression of confusion and amusement.
They settled back in their seats and proceeded to hiss and boo and laugh with the rest of the crowd. It was damn difficult to eat ice cream off a little wooden spoonlike paddle while in a darkened theater, but they managed. Then came tea with milk and sugar. It was all so British that Kyle grinned in wonder. Two countries separated by a common language . . . and a few weird-ass traditions.
“You missed some,” Nate whispered.
“Hmm?”
There was no mistaking what he meant when Nate licked a dribble of ice cream off Kyle’s lower lip. They kissed softly, almost hesitantly, even as the raucous story amped toward its conclusion. Kyle no longer thought to resist that public display. The dark helped. The distraction helped too. But mostly he wanted Nate to kiss him. There was nothing better. Not even the sex compared to giving and taking on such a heartfelt level.
A remembered stab of jealousy and want nearly ruined the moment for Kyle. Since being released from prison, Nate had lived with men, had kept up long relationships with men. That meant he’d shared mundane routines and taken-for-granted moments, such as exchanging quiet kisses that had nothing to do with amping up for a good fuck.
The part of Kyle’s soul he’d thought closed off—kept busily distracted with work and silenced by fear—was pushing free. He wanted mundane and taken-for-granted and quiet. He’d never let himself experience that level of closeness.
Nate licked his lips, his voice hushed. “You taste good.”
“You smell good.”
“I want to feel you up.”
Kyle glanced to his right where a sandy-haired boy of six laughed and pointed at the man in drag. “Some other time.” He caught Nate’s chin, forcing their gazes to lock. The spotlights were aimed at the stage, but enough light remained to see one another clearly. “But it’s not because I don’t want you to.”
It’s because I want you too much.
Lost in that unexpected limbo, he looped his arm through Nate’s and nestled as close as he could manage. Heat and breathing and heartbeats. Nate, Kyle, and the whole audience continued to play along with the panto as the hero and heroine came together for a melodramatic hug.
Kyle knew it wouldn’t last forever. Eventually the curtain would fall, the lights would come up, and he and Nate would lose each other in the crowd. That thought pinched genuine pain under his ribs. The clock was ticking. Christmas Day was the last day of shooting.


Maybe it didn’t have to be that way. 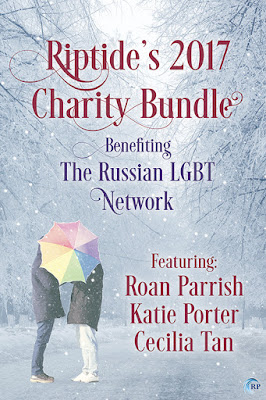 Katie Porter is the co-writing team of Lorelie Brown and Carrie Lofty, friends and critique partners of six years. Both are multi-published in several romance genres. Carrie has an MA in history, while Lorelie is a US Army veteran.

Generally a high-strung masochist, Carrie loves weight training but she has no fear of gross things like dissecting formaldehyde sharks. Her two girls are not appreciative.

Lorelie, a laid-back sadist, would rather grin maniacally when Carrie works out. Her three boys love how she screams like a little girl around spiders.

Connect with Lorelie and Carrie:

To celebrate the release of Came Upon a Midnight Clear, one lucky winner will receive a $10 Riptide credit! Leave a comment with your contact info to enter the contest. Entries close at midnight, Eastern time, on November 25, 2017. Contest is NOT restricted to U.S. entries. Thanks for following the tour, and don’t forget to leave your contact info!