There are two options for this interview! You can read the answers below or listen to John’s smooth voice give you his more spontaneous answers in the following audio interview:


How did you get involved in audiobook narration?

If you would have told me 5 years ago that today I’d be a successful audiobook narrator, I would have laughed in your face. I certainly didn’t plan it! But sometimes, if you just follow the path that is laid out before you, life can take you places you never dreamed!

I come from an audio engineering and musical performance background. My wife and I started our own business, Falcon Sound Company, in 2012. The initial business model was to focus on live sound and lighting production for local music and festivals, with a light splattering of recording local bands in our small studio.

We were working our day jobs while getting the business up and running for the better part of a year, then due to a lay-off and life circumstances we decided to go full time in 2013. At a gig one night a friend told us about a relatively new website he’d found called ACX. He said he was producing his 3rd audiobook. I’d been a consumer of audiobooks for years, so this intrigued me. Of course, as a struggling small business owner, I was always looking for new opportunities for revenue. That very next week I, along with my wife and a close friend, recorded about 10 auditions and submitted them. Within a few days we landed our first contract.

Fast forward to today; audiobooks have almost completely taken over our business! We produce close to 100 titles per year, we currently have close to a dozen narrators that record for us, and the live sound and lighting business has turned into more of a side project.

And what brought you to the gay romance genre?

It was completely by accident. In our first round of auditions I was offered a contract on “Ghost of a Chance,” by Jade Falconer. (It’s available on Audible, and my performance is absolutely dreadful…). To be honest, I had no idea it was a gay romance book. It looked like a paranormal title to me. Lo and behold, once I started doing my pre-read I was a bit surprised!

What do you most enjoy about voice acting for romance novels?

This genre gives me an opportunity to delve into some deep emotions. I really enjoy the broken or flawed characters that are often presented. Don’t get me wrong, I really enjoy some other genres as well. Comedy, sci-fi, fantasy… those are my go-to books for personal reading. I have been slowly adding some of those titles to my narration work under the pseudonym “Jack Wayne” (I’ve done a few as John Solo too!!!). But I get the feeling I will always come back to romance. Love can manifest from so many different angles… It’s like a never ending well of opportunity for an actor.

When it came to Smoky Mountain Dreams in particular, were there any scenes you found challenging? Scenes you especially enjoyed recording?

For challenging, there are two scenes that come to mind. First, there is a scene between Jesse and his sister-in-law Jackie that plays out at the nursing home. Jackie was an intriguing character for me to play… her intentions are good, but she sees the world through rose colored glasses, and the repercussions of her decisions could have life and death consequences. This scene had a lot of character development for Jesse as well, as he starts to really grasp that the world is not black and white. For me there were a lot of undercurrents going on emotionally that I tried desperately to translate into the microphone, and I seem to remember retracking many of the lines over and over again, trying to get the subtlety just right. Listening back to it I still think I could have done a better job… The other challenging scene is very near the end of the book when Chris’s entire family, including one estranged father, makes an appearance. Trying to differentiate voices for multiple members of the same family can be… well, challenging!

Enjoyed? The first one that popped up in my mind when I saw this question was the noodle fight scene at Jesse’s house. I really had fun with that one.

Speaking to readers/listeners, what reasons would you give for them to pick up Smoky Mountain Dreams?

You know that feeling you get when you finish reading a book and you can’t believe that you are done living in that world and with those characters? I and my wife, spent over 100 hours of my life working on this book, and I STILL didn’t want to leave.

If you are looking for a beautifully sculpted, masterfully constructed piece of romance literature that will elicit tears, laughs and the urge to eat chocolate ice cream with orange soda, this one is for you. 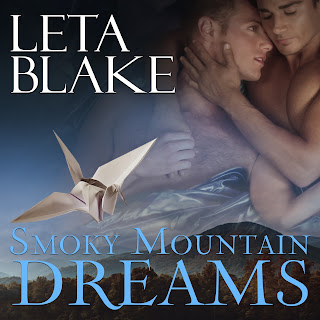 After giving up on his career as a country singer in Nashville, Christopher Ryder is happy enough performing at the Smoky Mountain Dreams theme park in Tennessee. But while his beloved Gran loves him the way he is, Christopher feels painfully invisible to everyone else. Even when he's center stage he aches for someone to see the real him.

Bisexual Jesse Birch has no room in his life for dating. Raising two kids and fighting with family after a tragic accident took his children's mother, he doesn't want more than an occasional hook-up. He sure as hell doesn't want to fall hard for his favorite local singer, but when Christopher walks into his jewelry studio, Jesse hears a new song in his heart.

Posted by Diverse Reader at 2:10 PM