Like lots of romance fans, I’m a sucker for characters who aren’t perfect, but who are perfect for each other.

I think there’s someone out there for everyone. No one is ‘perfect’. You have to overlook the things that don’t really matter (like a certain kind of body or a glamorous lifestyle), and focus on the things that do.

Mended with Gold has some serious themes – the main character, Alex, has post-traumatic stress disorder. He starts the book in a not-very-happy frame of mind. He’s had therapy, but PTSD doesn’t just ‘go away’ and he’s suffering from mild depression. He’s instinctively searching for a quieter, more meaningful way of life, and a place to call home. Alex doesn’t know it yet, but in a remote New Zealand beach settlement, he’s about to meet the guy who’s perfect for him – even if, on the outside, they don’t seem to have that much in common:

· Alex is Canadian by birth, but has lived a peripatetic, international life, latterly in New York and London. Joe has never left New Zealand.

· Alex had a conventional upbringing in suburban Toronto. Joe lived in a commune in the bush until he was a teenager.

· Alex is a successful commercial photographer who’s photographed hundreds of famous people. Joe makes comics and is so shy that when he first meets Alex he slinks out without speaking to him.

· Alex is financially comfortable. Joe can only just keep body and soul together.

· Alex has no pets. Joe has an old white horse.

And yet, Alex discovers that Joe is sympatico – gentle and playful, and determined to be himself. Mended with Gold might have serious themes, but it’s an uplifting story. It’s about overcoming the odds and finding true love. It’s about how telling the truth can transform your life.

If you like imperfect heroes, I hope you’ll like Alex and Joe, who aren’t perfect, but who are perfect for each other.

On top of the cliffs, there was nothing but the wind, and the gulls riding the currents over a hundred-metre drop. In the distance, Alex could see the South Island, blue mountains across the sparkling sea. The anger was ebbing. The wind tore his body warmth away, and he felt cold and small. He wanted to be home, safe in the afternoon sun on the Chesterfield. But he’d left Joe there so he couldn’t go back. Not yet. A headache pulsed in his left temple.

Ah, God, why did it have to be the young handsome guy I freaked out in front of? Why couldn’t it have been some crusty old codger with a beard like steel wool?

Well, because that was life. The divine comedy. And sometimes it was so funny, the tears ran down his face and he gasped for breath.

After a while, he remembered the kind, plump face of his therapist in London, her rather posh English accent, her voice always calm, always quiet. After nearly a year, he’d grown sick of listening to her, and sicker still of listening to himself. Now, he often thought of her at times like this. He tried to relax in the way she’d suggested. Tried telling himself those sensible things you were supposed to tell yourself: everybody can have a bad day, it doesn’t mean you’re back at square one, it’s a long road, what doesn’t kill you makes you stronger, you’re doing fine.

Wouldn’t it be nice if they felt true?

Probably the story would get around that the Canadian guy who’d bought Addison’s and seemed so nice, was actually pretty fucking weird. And Matire wouldn’t want her kids showing him how to eat kina, and there would be no more invitations to art groups or people coming to check the water tank out of a sense of neighbourliness. It was pathetic to mind, because what did it matter what these people thought? And yet it did. Because he liked it here, with these people who thought quilting was an art-form and yet had original Warhols in their living rooms, and who cared about herons and not what kind of sweater you wore. He wanted to stay and feel safe here at the edge of the world, and have ordinary good things in his life.

He had no idea of the time because he’d left his phone at home, but eventually the sun began to set, and he grew so cold that nothing else mattered. He stumbled down the stony hill track, up the grassy valley one. The concrete step was empty. Joe had gone. And Alex had said ‘I’ll be back’ like the Terminator. And of course, had not come back. So that was another mark against him, another unreliable act. He opened the unlocked front door, resigning himself to a night of hell, and trod on a piece of white paper. Wearily, he turned on the light and picked up the paper, ready for questions, apologies, or recriminations, but it wasn’t a note at all. 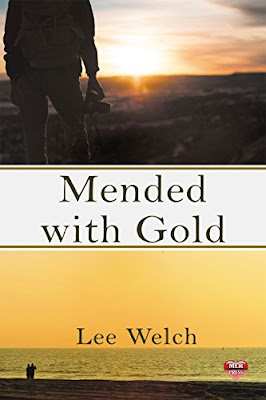 A photographer with post-traumatic stress disorder falls for a comics artist on a wild New Zealand beach, but can he find true love when he feels so wounded by life?

Everything changed when the bomb exploded. Forty-five-year old, Alex Cox worked as an international photographer until a deadly explosion left him with post-traumatic stress disorder. Emotionally wounded, and desperate for a sense of safety, he's run all the way to wild and remote Kahawai Bay, New Zealand.

Under the worst possible circumstances, Alex meets Joe, a shy young comics artist. Joe lets Alex into his playful, gentle world of comics, and soon Alex is falling for him, hard. Alex longs for more. Joe is reticent. But is it shyness? Or does Joe not want a much older lover with 'issues'? Or is something else keeping them apart?

This is a tender and uplifting story about creativity, adversity, true love, and comics.

Lee Welch wrote her first book aged seven (a pastiche of The Lion, the Witch and the Wardrobe) and first had an idea for an m/m romance aged twelve. She loves books and comics, and when she’s not writing, she’ll probably be reading. Her favourite authors include Ursula Le Guin, Graham Greene, Linda Medley, Dylan Horrocks and KJ Charles. By day, Lee works as an editor and business communications adviser, mainly persuading people not to say ‘utilise’ when they mean ‘use’. Her job has led her to work in areas as diverse as mental health, nursing, accident prevention and the criminal justice sector.

Posted by Diverse Reader at 5:30 AM