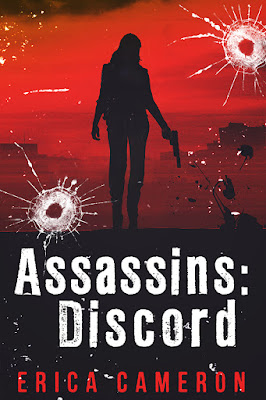 Kindra’s moral compass has never pointed north, but that’s what happens when you’re raised as an assassin and a thief. At sixteen, she’s fantastic with a blade, an expert at slipping through the world unnoticed, and trapped in a life she didn’t chose. But nothing in her training prepares her for what happens when her father misses a target.

In the week-long aftermath, Kindra breaks ranks for the first time in her life. She steals documents, starts questioning who their client is and why the target needs to die, botches a second hit on her father’s target, and is nearly killed. And that’s before she’s kidnapped by a green-eyed stranger connected to a part of her childhood she’d almost forgotten.

Kindra has to decide who to trust and which side of the battle to fight for. She has to do it fast and she has to be right, because the wrong choice will kill her just when she’s finally found something worth living for.


Chapter One
Tuesday, February 16 – 0531
For the first time since she was ten, Kindra almost dropped her knife.
Breath catching in her throat, she stared at her hand and willed herself to calm the hell down. Sure, this had been an effing weird week, but what she had to do here today wasn’t anything new. She knew the drill. Get in, get done, get out, get gone.
The slip had happened in less than a blink, her fingers sliding on the ribbed handle of the blade. Anyone skilled with knives would’ve noticed the near-miss. And there was no reason, not in anything Atropos held holy, for Kindra to have almost dropped the knife.
The guy strapped to the chair in front of her wasn’t skilled. Even if he had been, Kindra was pretty sure Mr. Bernard Gasper had other things on his mind right now. Like figuring out how to not die in the next sixty seconds.
Tightening her grip, Kindra strode forward. The chill crept through her thin gloves, numbing her fingers, but that was the downside of abandoned warehouses in winter—people noticed if you turned on the heat. She ignored the biting air, the smell of old fish, and the annoyingly loud creaks the roof made as the wind battered it. Instead, she concentrated on her assignment. Her target. The one her father had missed.
Kindra refused to acknowledge that tonight, for the first time in her life, her hands were shaking. She refused to even consider the possibility that her father’s affliction had hit her.
There was, however, another possible cause that she couldn’t discount: Bernard shouldn’t be here. It was possible that Kindra’s hands were shaking because she shouldn’t kill him. Because doing this would permanently damn her already bloodstained soul to Hades.
She cataloged the sprinkling of gray in his otherwise dark-brown hair, and the sheen of sweat on his copper skin—sweat, in a room that couldn’t be above thirty degrees, because he was still struggling.
Bernard Gasper fought the thin ties binding him to the chair bolted to the floor. The gag kept him mostly quiet, but he battled his bonds so fiercely that they were cutting into his skin. Blood dripped off his wrist and into small puddles on the stained concrete.
Kindra eyed the growing patches of evidence with distaste. Guns had never been her favorite weapon, but there was definitely something to be said for death by sniper rifle: a lot less cleanup for the assassins.
The gag would have to go, because she needed information, but for a moment she stared into his dark eyes. There was terror there, but he also seemed to be pleading for her to listen. To hear him. But he didn’t want to talk, he wanted to beg. For his life and for the protection of his cause.
And because this job had, for the first time in her life, given her a reason to think maybe disobedience would be worth the risk, she was actually contemplating listening.
Oh, bad idea.
Ripping the gag out but holding the knife to his throat—hoping it’d be just enough of a threat to keep him from screaming—Kindra watched Bernard suck in air and try to speak.
“If I—I tell you what I know, they’ll kill you too,” he wheezed, his voice so raw Kindra could barely make out the words.
“They could try.” Kindra pressed her knife harder. Whoever “they” are.
Bernard opened his mouth—to argue? To plead? To scream?
The door blew off its hinges. Brutal heat filled the once-freezing warehouse. Debris flew across the room, and Kindra wasn’t quick enough to dodge it. Not all of it. Something heavy slammed into her shoulder, and her head cracked against the cement floor. The air carried a blast of burning clay.
Shit. Was that C-4? The ringing in her ears and the darkness encroaching on the edges of her vision swamped her thoughts. She fought against the dizziness, trying to push it back. It took far longer than she liked to open her eyes.
When her eyes focused, a familiar face hovered above hers. One that shouldn’t have been anywhere near here.
“Baby, we’ve really got to stop meeting like this,” said a girl with dyed-black hair—her brown roots peeking through—and teasing moss-green eyes. A familiar endearment on the wrong tongue, and familiar eyes in the wrong face.
Finally, the aha moment she’d been waiting for but never thought she’d get.
He was in disguise.
It was her last coherent thought before everything went black.

To celebrate the release of Assassins: Discord, one lucky winner will receive $30 in Riptide Publishing credit! Leave a comment with your contact info to enter the contest. Entries close at midnight, Eastern time, on September 10, 2016. Contest is NOT restricted to U.S. entries. Thanks for following the tour, and don’t forget to leave your contact info!