Book of the Week: Forsaken by Sloane Kennedy #Review 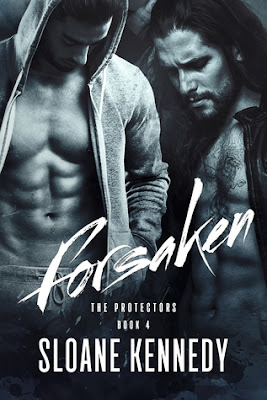 Abandoned. Abused. Betrayed.
Ex-cop Maverick “Mav” James needs only three things. His Harley, an open road and his work in an underground organization that delivers justice when the law can’t.

Family? They left him long before he left them.

Mav’s motto is simple: Get done and get out. Work, sex, doesn’t matter. No emotional connections. Simple.

Until he meets him.

Alone. Hiding. Broken.
At fifteen years old, Eli Galvez had nothing. No family, no friends and only his body as a means to make enough money to survive. But a chance meeting changed all that and eight years later, he’s well on his way to having the life he could once only dream of. He’s been accepted into medical school and he’s finally returned home to Seattle to be closer to the men and women who don’t share his blood, but are the only family he’s ever really known.

Only things aren’t what they seem and the secrets Eli has been hiding are about to come to the surface with dangerous consequences.

One final chance at a real future.
Guys like Eli just aren’t Mav’s type, period. Yet he can’t deny his intense attraction to the younger man who only looks at him with fear in his eyes. Until the day there’s something else in those eyes too. Something that draws Mav in and refuses to let go. Something that makes him want to forget his rules. But Mav’s learned the hard way what happens when you get too close to something. And while he vows to protect Eli after a violent attack leaves the younger man shaken, protection is all he’ll offer.

Because anything else would just cost too much.

Sloane is one of those authors that you can tell by reading her books that she loves the broken, flawed, and damaged guys! And for that her guys and their love have become crack to me because I am drawn so much to that kind of character and stories; the kind that you have a deep connection and love for the men wanting to see them through this journey.
Mav has been let down in his life way too many times to not learn the lesson of not getting attached. So he doesn’t stick around and when he needs to escape that’s what his Harley and job are for. Just jump on and head off to the next job. But Eli changed all that for him. Oh he still doesn’t want to get attached but he can’t help it he’ll just keep in mind that this young man will leave him like everyone else, just give him time.
“What ashes were you rising from?”...
“The kind that burn you over and over again.”
Eli is the 15 year old boy we met in Logan’s Need that was rescued by Dom. It’s now years later and he now has a family. His mom is in-love and married to a man with two sons of his own. He is going to college for pre-med and he is finally back in town to be by Dom and the whole Barretti family. It should be the perfect life right? But something is going on that makes that perfect seem so false. What is Eli hiding from or who? Eli is whole because something broke him long before he found Mav but Mav sets off a fire in him, makes him want what he never thought he would after what he has been through, makes him realize he is strong and can stand up for himself.
“Tell me you want this,”... “I don’t have the words to explain how much I want this,”
There is so much plot wise in this story that drives these two very stubborn men but I don’t want to give too much away since that is the best part. There were some surprises that I liked in this story although they were tough to take. I love how strong Eli became as the story progressed and how he wouldn’t let Mav back away from him without a fight no matter how much Mav tried to hurt him. I know some of the things that Mav did to push Eli away will bother some people but just keep in mind Mav is not an easy guy, he is one tough nut to break and the breaking has to happen slowly or Eli could lose him forever. Eli has to become the guy Mav can count on, prove to Mav that he will never leave him. It is a struggle we see plain as day. Mav the tough guy always protecting others needs someone that he can lean on and that can show him he is wanted.
“It was all about me. For the first time I my whole goddamn life, I was being put first.”
The sexy in this book is off the charts!! As per usual in Sloane’s books but damn these two are hot together. But there was also this deep connection that came out a lot in their sex scenes which, for me, was the best part. Yes there were some that were just HOT but the ones with that emotion playing a huge role were the ones I loved the most.
“You make me a little less broken.”
Oh and one last thing...Baby! I was so happy to see Baby again after Logan’s Need! And that is one awesome Rottweiler who is both cuddly and super protector for Eli! So if you haven’t read this book DO IT! Although this is a standalone I would recommend you read Logan’s Need first to get a better understanding of Eli’s background and story.

Posted by Diverse Reader at 2:32 PM