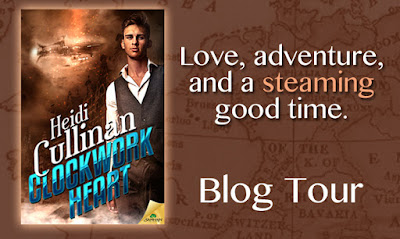 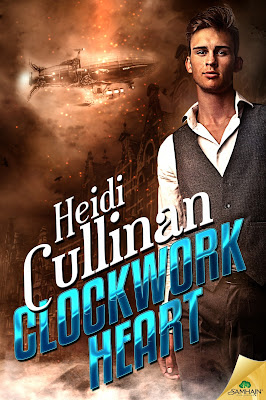 
Love, adventure and a steaming good time.
As the French army leader’s bastard son, Cornelius Stevens enjoys a great deal of latitude. But when he saves an enemy soldier using clockwork parts, he’s well aware he risks hanging for treason. That doesn’t worry him half as much, however, as the realization he’s falling for his patient.
Johann Berger never expected to survive his regiment’s suicide attack on Calais, much less wake up with mechanical parts. To avoid discovery, he’s forced to hide in plain sight as Cornelius’s lover—a role Johann finds himself taking to surprisingly well.
When a threat is made on Cornelius’s life, Johann learns the secret of the device implanted in his chest—a mythical weapon both warring countries would kill to obtain. Caught up in a political frenzy, in league with pirates, dodging rogue spies, mobsters and princesses with deadly parasols, Cornelius and Johann have no time to contemplate how they ended up in this mess. All they know is, the only way out is together—or not at all.
Warning: Contains tinkers, excessive clockwork appendages, and a cloud-sweeping tour of Europe. A little absinthe, a little theft, a little exhibitionism. Men who love men, women who love women, and some who aren’t particular.

Clockwork Heart is, like many steampunk novels, a work of alternate history. At its heart are two subtle tweaks to the past we know, and the story imagines the ripples those alterations create.
The first difference between the Europe of our past and the Europe Clockwork Heart’s characters inhabit is the presence of a noble gas called aether. In classical understanding, aether is a philosophical concept of material beyond the terrestrial sphere of Earth. It was something of a catch-all to explain gravity and light. In ancient and medieval times aether was imagined to remain closer to Earth, as Earth was assumed to be most of the universe, but later we imagined aether extended throughout space. There’s much more to aether’s history in our philosophical, scientific, and cultural understanding, and you can get a rudimentary introduction about it here.
In A Clockwork Heart, aether is imagined to be a tangible element, a versatile gas which can be used as an energy source and as a medical aid: as an antiseptic, as a pain killer, and as a means to gently render a patient unconscious for surgery.  It’s mined primarily in the Alps and Himalayas, though the Americas have found it in the mountains of the south, in Argentina and Peru, and in the north, in the Western US and in Canada. Because of the presence of aether, economies, allegiances, and even borders of countries are different than we know them to be today or in the latter half of the 19th century.  Petroleum is entirely unused, save the occasional industrialist pushing it as an alternative fuel source.
The other major difference the world of Clockwork Heart brings to our understanding of history is the domination of the nation of France. Beginning with the rise of Napoleon, France became and remained the dominant power, but unlike the England of the world we know, France never becomes complacent in its power, nor does it overreach. It overtakes Germany and much of Spain, but only at the beginning of the book does it take Switzerland. The Austrian empire holds back France, England largely escaping because it’s so difficult to seize and maintain a hold on the island nation. Italy, in an alliance with Portugal, manages to stay out of the fray and hold dominance in the Mediterranean, and with the rise of the Americas as an economic and developmental power, it’s once again a powerful trade hub.
Of course, Clockwork Heart begins with the world on a precipice: soon there will be either greater, more devastating war, or their will be the first cracks in France’s might and the beginnings of a new peace. Which direction the continent takes is not up to the leaders of nations or the generals of the army. It’s all down to a rag-tag group of airship pirates, a defected young Austrian soldier, and a tender-hearted tinker in possession of a clockwork heart.

First off I want to say two things. I have never read a steampunk novel is the first thing and the second thing is I’m not totally sure it’s my thing. That’s on a personal note. However, that said. For people who are HUGE fans of steampunk I have no doubt this is the book for you. Heidi has a way of creating worlds that mesmerize you. Her way of describing people, places, things, anything is always outstanding and it constantly leaves me breathless.
Cornelius and Johann were amazing together. Johann, more clockwork than man, falls for his “creator” and that love is returned. That was so adorable. Especially when they couldn’t understand each others language. Johann was all, “I don’t care what you’re saying it sounds so nice just talk more.” And Cornelius was just desperate to make Johann understand his methods and his genuine love for him and humanity.
There are pirates and politics. Raunchy and romance. Sex and love. There’s great suspense and epic adventure. I was absolutely entertained throughout this story!!!!! 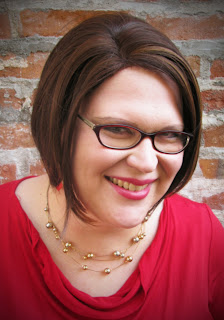 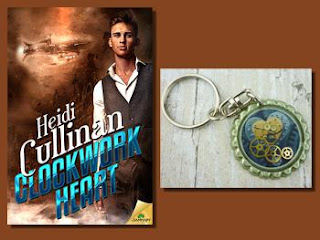 a Rafflecopter giveaway
Posted by Diverse Reader at 6:16 AM