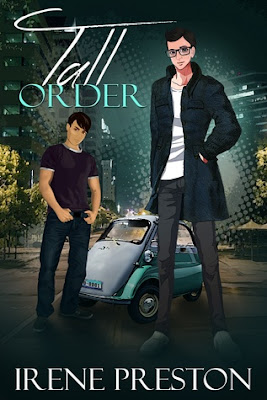 Chef Dylan Trevino screwed up bad, and he knows it. When he left Austin, his job, and his boyfriend behind, Dylan was confident Aston would follow him to New York. Now he’s back home and working for the worst caterer in town just to pay the rent. Being head chef at a party thrown by a famous rocker doesn’t make up for serving bland tacos while dressed like a dime-store cowboy. Thank god his ex can’t see him now.

Aston Winkler’s steampunk guitar mods are all the rage with musicians and he’s got invites to every hot party in town. Too bad he’d rather be listening to garage bands than networking in a penthouse. From his 6’7” vantage point, Aston has no problem spotting Dylan at the crowded SXSW party. Getting his boyfriend back? That’s a tall order.

“Hello, Dylan.”
Dylan closed his eyes at the unfairness of the whole fucked up night. Damn, damn, damn. The sound of his name on Win’s lips still made him weak at the knees. It made him want to punch the asshole in the other room and anyone else who’d touched Win while he was gone. It made him want to take Win home, and take him to bed, and remind him they belonged to each other. Dylan and no one else took care of Win. Unfortunately, none of that was possible, and it was all his fault.
He turned.
“Win.” It was all he could manage. Up close Win was even more devastating. Dylan locked his knees so he wouldn’t take a step closer. If he started moving toward the man standing in the doorway, he wasn’t sure he could stop.
“Most people just call me Aston now.”
I’m not most people. Dylan stopped himself from saying it out loud.

Win watched him for a minute. “I didn’t know you were back in town.”
Was there a shadow of hurt in his eyes? Dylan couldn’t tell. The realization sliced him, because he had always been able to tell exactly what Win was thinking.
“Just got back.” What else was there to say? Yes, he was back in Austin. No, he wasn’t in New York. Yes, his Big Chance had been a Big Mistake. No, he never should have left. He should have stayed here, a medium-sized fish in a medium-sized pond instead of trying to swim in the ocean. He should never have forced Win to choose.
Win took a few steps closer and all the thoughts running around in Dylan’s head stopped cold so his brain could focus on one fact. Win. Right in front of him. I could touch him.
Win was so close Dylan had to tilt his head to keep looking at him. The angle brought back the memory of every time he’d angled his head just so when Win leaned in to kiss him.
Dylan held his breath, held as still as he could, and tried not to give the thought away.
Win gazed at him for a minute, then lifted one hand and trailed a finger down the front of Dylan’s shirt, lighting up nerve endings as he went.
“Cute.”

I found this to be an absolutely adorable story. A true feel good tale. We jump right into the "after the relationship" part of Aston and Dylan's situation. There were these little parts that broke my heart. The struggle these two went through when they were a part. The struggle they still go through. How much them being together seems almost vital to them. It isn't until you really see them together that you realize they just can't be a part . This is sweet story about how important it is to go through life with the one that you love and not try to do it alone. Surrendering yourself is not weakness. It's the greatest strength of all!

About Irene Preston
Irene Preston has to write romances, after all she is living one.  As a starving college student, she met her dream man who whisked her away on a romantic honeymoon across Europe.  Today they live in the beautiful hill country outside of Austin, Texas where Dream Man is still working hard to make sure she never has to take off her rose-colored glasses.