Blog Tour: All That Is Solid Melts Into Air by Christopher Koehler #Giveaway ~Guest Post 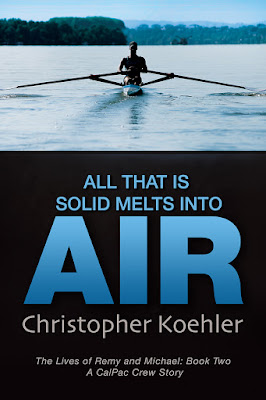 Title: All That is Solid Melts into Air

Series: The Lives of Remy and Michael: Book Two

The Lives of Remy and Michael: Book Two

I thought life after high school would be easier. I’d go to California Pacific for a year while I got a handle on my HIV, then after Michael graduated from high school, we’d blast out of here for colleges—and life—on the East Coast. Then I visited Boston and everything changed. I realized I like CalPac. Turns out, Boston didn’t have anything for me beyond one of the biggest regattas in North America.

Life grew more complicated when I got home. I couldn’t find a way to tell Michael that I’d just blown our plan for our lives out of the water. Then my CalPac coaches dropped a bomb on me. Those rowing officials who’d been watching me? They were recruiters for the national team, and my coaches wanted me to try out. They’d even let Lodestone coach me. Now I have to choose, school or crew, CalPac or Michael, and I still haven’t told Michael I can’t transfer. Is there even a place for Michael in my life? Somehow we have to withstand training at the highest levels and having different goals. Will love hold us together… or tear us apart?

What am I currently working on?

Thanks for having me here today to talk about my work. If you’ve stopped by the other blogs on this blog tour you already have an idea when you’ll see the third book in the “Lives of Remy and Michael” series—not for a while—which raises the question of What am I working on?

Interesting question, that, and the answer requires a bit of background. Have you ever wondered what happened in Britain between the retreat of the Roman legions after 410 and the arrival of the Saxons by roughly the end of the sixth century? Sure you have! I have a PhD in history (okay, not that time or place) and I had no idea at all. So I went wandering, as one does, on Wikipedia. Apparently that particular era is called sub-Roman Britain (remember, we can’t call it England because there were no Angles yet…Angle Land become England). Who knew? Apparently I do, now.

What makes sub-Roman Britain more interesting to me is that this era is when Arthur would’ve existed, if exist he did. Arthur is a Welsh name, and he would’ve been a Welsh warlord in on the cusp of the Anglo-Saxon era. What makes it all so much more fascinating to me as a reader, a writer, and an historian is that there is not a single shred of historical evidence any such person existed and that the Arthur legends of later writers, whether they be early medieval writers like Gildas or later medieval writers like Geoffrey of Monmouth, Chrétien de Troyes, or Sir Thomas Malory is that they depict Arthur as a paragon of medieval chivalric virtues. Their Arthurs reflect their cultures and their cultures’ needs, not any attempt to capture a “real” historical Arthur. It’s easy to understand why. They predate the development of an historical consciousness in the West, the idea that the past is different from the present. Still, those Arthurs have no possible bearing on the only time Arthur could’ve lived in, whether or not there are any historical traces.

But the picture becomes ever more complicated and, to my way of thinking, more fun. As it turns out, while there may be no traces of Arthur, be he a pre-Saxon warlord or a mirror of medieval virtue, the historical record remembers some of the figures depicted in the Arthur legends: King Urien of Rheged and his two sons, Owain mab Urien (later known as Ywain) and Owen (or Ywain) the Bastard. Rheged was part of what was called the Old North (Yr Hen Ogledd in Brittonic), part of what is now Cumbria. The Eden Valley is the heartland of what was once Rheged. Urien ruled Rheged at the end of the sixth century AD, and his existence and reign are attested to in the surviving works of his court bard, Taliesin. 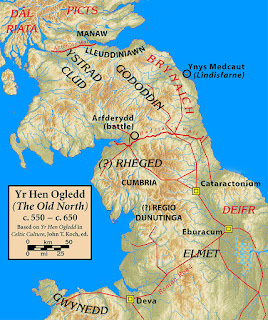 I’m taking these historical tidbits, along with a healthy dose of fantasy, and knitting them into a novel tentatively called Bullsh*tting Your Way To Camelot. I’ve taken Ywain the Bastard (he preferred to be called Ywain the Adventurous…I wonder why?) as one of my protagonists, plus an entirely made-up character, Baru, a refugee from a future Earth colony who’s a magician banished to Earth’s past. By “bullshitting”? Because Urien’s queen and Ywain mab Urien’s mother was allegedly Morgan Le Fay and that’s where the historical record jumps the tracks entirely.

Along the way I’ll introduce you to Novafornia, its indigenous inhabitants and their non-linear causality, and how they dealt with humans and a disastrous first contact; show how two men from such different times and places can fall in love and what love means to them; as well as drag you headlong through Welsh mythology before Ywain and Baru strike out for Camelot.

I need a break from rowing novels for a while, and it’s my hope that this will be it.

Christopher Koehler learned to read late (or so his teachers thought) but never looked back. It was not, however, until he was nearly done with grad school in the history of science that he realized that he needed to spend his life writing and not on the publish-or-perish treadmill. At risk of being thought frivolous, he found that academic writing sucked all the fun out of putting pen to paper.

Christopher is also something of a hothouse flower. Inside of almost unreal conditions he thrives to set the results of his imagination free, and for most of his life he has been lucky enough to be surrounded by people who encouraged both that tendency and the writing. Chief among them is his long-suffering husband of twenty-two years and counting.

When it comes to writing, Christopher follows Anne Lamott’s advice: “You own everything that happened to you. Tell your stories. If people wanted you to write warmly about them, they should have behaved better.” So while he writes fiction, at times he ruthlessly mines his past for character traits and situations. Reality is far stranger than fiction.

Christopher loves many genres of fiction and nonfiction, but he's especially fond of romances, because it is in them that human emotions and relations, at least most of the ones fit to be discussed publicly, are laid bare.

Writing is his passion and his life, but when Christopher is not doing that, he's an at-home dad and oarsman with a slightly disturbing interest in manners and other ways people behave badly. 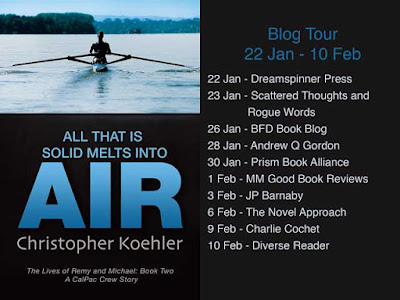 a Rafflecop-ter giveaway
Posted by Diverse Reader at 5:29 AM