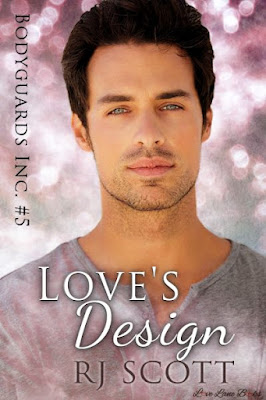 Blurb: Can Christmas be the time when Kirby finally stops running and allows himself to fall in love with the man who saves his life? CIA Agent Stefan Mortimer is cooling his heels in the UK until he can go home. Taking on easy assignments with Bodyguards Inc. seems like a good solution to keep him sane. He's used to life throwing him curveballs, and it’s just another day at the office when he rescues Kirby Devlin and his niece and nephew. Now he has to keep Kirby and the kids alive and stay professional.

Kirby Devlin has one priority; keeping his small family safe. On the run, and facing danger at every turn, Kirby finally runs out of places to hide on a snowy December day at Edinburgh airport. Stefan comes to the rescue, saves him and the children. Is it possible that Kirby finally has someone to trust?

Now, if only it would be as easy for Kirby to trust Stefan with his heart.

Excerpt:
“What the hell is he doing?” Stefan murmured as the man in the cheap suit moved out of the shadows and back into them again.
Tall, with his hands pressed deep into his jacket pockets, the man crossed from one side of the large empty waiting room to the other. His expression was one of determination, but his posture screamed anger, and it was difficult to tell which was winning from this distance.
Stefan was killing time at Waverley, the train station in Edinburgh, waiting for the train holding his latest babysitting job to depart, and all he could focus on was this one man. Typical that even when he was supposed to be having a quiet time with his Kindle, Stefan spotted shit that just wasn’t right.
Call it boredom, call it a sixth sense, but the man in the suit was up to something. And he was one of three. He had two friends along for the ride: a tall guy and another as wide as he was tall, with his head disappearing into his thick neck. Abruptly, Stefan knew he had been looking at the man in charge of two heavies. Both Tall Guy and Neck Guy had disappeared into the bathrooms five minutes ago and had yet to come back out.
The Boss, as Stefan called him in his head, kept pausing outside the bathrooms, where a sign proclaimed “Cleaning in Progress”. The waiting area was sprawling, drafty and empty of all but a few diehards, probably those waiting for late arrivals, which were mostly delayed, due to snow.
Stefan knew something was going down in there and he fairly itched with the need to get involved.
“Not my circus, not my monkeys,” he muttered to himself. Kyle would kill him if he got involved with something that would call the wrath of MI6 down on them again. As it was, Kyle was trying to calm down the CIA after the whole missing-scientist incident, and almost had them agreeing to take Stefan back so that Stefan could hunt down whoever fucked up and exposed the scientist they’d had under protection.
Three suspicious men in a near-deserted railway station weren’t his problem. His problem was the annoyingly entitled investment banker who was now safely on a train with his next bodyguard, on his way to London. A glance at the board had Stefan wincing. He’d hoped to be gone from the station by now, but the snow was causing delays and some cancelations, and the London train would be the last on the board scheduled to leave, four hours late at nearly 10:00 p.m. The rest of the departures were listed with large signs saying everything had been canceled. No wonder the station was empty. And yes, he was bored.
One thing Stefan Mortimer didn’t do well, was sitting on his ass doing nothing. I’m bored. I need to get laid, and I need to go home. Not necessarily in that order. He’d been stuck in the UK for going on half a year now, and, by necessity, had slipped into working for Kyle at Bodyguards Inc. Not that he needed the money, but he was a man of action, and sitting around with his thumb up his ass was not the way he spent his time.

I love RJ Scott’s Bodyguard Series. Book 5 might be one of my top 3 favorites of this series. I LOVE Kirby and I’m beyond grateful to Stefan for saving him and the weens lol. This was a gorgeous love story. More passion than suspense in this book but lacking absolutely nothing. This was fantastically entertaining. Andy and Lou made me laugh and get all teary eyed. Kirby…. Oh he is just the best! What a great character he is! If you’re not reading this series, you really need to because it wins all the awesome!

RJ Scott has been writing since age six, when she was made to stay in at lunchtime for an infraction involving cookies. She was told to write a story and two sides of paper about a trapped princess later, a lover of writing was born.
As an avid reader herself, she can be found reading anything from thrillers to sci-fi to horror. However, her first real true love will always be the world of romance where she takes cowboys, bodyguards, firemen and billionaires (to name a few) and writes dramatic and romantic stories of love and passion between these men.
With over seventy titles to her name and counting, she is the author of the award winning book, The Christmas Throwaway. She is also known for the Texas series charting the lives of Riley and Jack, and the Sanctuary series following the work of the Sanctuary Foundation and the people it protects.
Her goal is to write stories with a heart of romance, a troubled road to reach happiness, and most importantly, that hint of a happily ever after.
rj@rjscott.co.uk
www.rjscott.co.uk/
https://twitter.com/Rjscott_author
www.facebook.com/author.rjscott
www.librarything.com/author/scottrj
www.tumblr.com/blog/rjscott  (some NSFW (not safe for work) photos)
www.pinterest.com/rjscottauthor/


a Rafflecopter giveaway
Posted by Diverse Reader at 8:28 AM