A Piece of Me: Jenna Kendrick 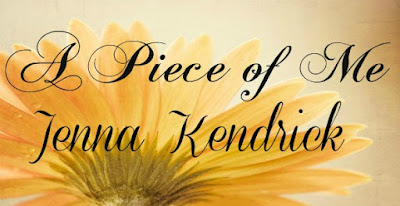 My monthly feature; A Piece of Me has the wonderful and talented Jenna Kendrick as my guest poster. I can't think of a better person to be my last feature for the year. Jenna wrote an absolutely fabulous post this month and I'm sure you'll all love it as much as I did.

This past year has been the most exhilarating, frustrating, exciting, humbling, and scariest of my and multiple “under-the-bed” books which will never see the light of day, I released two novellas and a novel this year. Well, two novellas, at least. Make Me Believe came out in July, and “The life. After years of writing non-fiction tech books and honing my fiction writing skills by way of fanfic Eighth Night” came out in November as part of the Home for the Holidays anthology. My novel, Stuck with You, however, has been the most jinxed release I’ve ever experienced—and that includes the Photoshop book that was released the day its publisher filed for bankruptcy and the FrontPage book that had another author’s name on the cover. Stuck with You has been, in a word, stuck. Originally scheduled for release in October, it’s been stuck with retail site bugs, formatting software bugs, and editors who bugged out. As I write this, the book is once again Under Review on the retail sites and should be live any minute now. I’ll believe it when I see it—you’ll probably hear the cheers from your house when I do. And I’m sure the friends who’ve listened to me threatening to quit and get a job as a bank teller will give a sigh of relief.

Of course, the book going live is only the start. Putting out a book is like undressing in front of someone for the first time. I want to make a good impression. Is the book mechanically correct—is my underwear clean? Is the story compelling—does my partner like what they see? Did I do justice to my characters and bring the story to a satisfying conclusion—is this going to be a one-time hookup or the start of a relationship? Did I do justice to the LGBTQ community as a whole?

Wait, I’ve got a whole community riding on how I bare my flesh—I mean, how I wrote this book? Of course not. But I do sometimes feel like the whole community is going to judge whether I’m a worthy ally by how I write my books and how I present myself as an author.

I’ve included LGBTQ characters in my work from the first story I wrote for the Writing & Thinking Workshop my college required before freshman year. Many years later, I started reading gay romance and realized that I could write entire books about these characters and give them their own happily ever after. That’s when I truly discovered my voice as a writer. Writing male/male romance has made me a better person—I stand up for myself and take more risks than I ever have before. I’m grateful to have the opportunity to share my voice and experience this personal growth. At the same time, I’m not a gay man, and as someone writing about a group of people I’m not a part of, I feel a responsibility to tell these stories well and respectfully. If I do those who identify with my characters a disservice, I expect to be called out on it.

As someone who’s interacting with readers and fellow writers, I also realize my personal behavior is being judged alongside my words. I wouldn’t consider myself a worthy ally if I didn’t respect the community, including those who show their rough edges in public. I don’t have to like everyone or agree with what they say, but I’ll always defend anyone’s right to speak up when they feel wronged by others, including those within our genre.

I also hurt along with everyone else when someone takes advantage of those in our community by creating false personas and accepting gifts, money, and emotional support intended for someone who doesn’t really exist. This is stealing. They stole from the readers who bought into their lies. They stole from real wounded veterans, homeless young men and women, people with mental illness—those who might have received those gifts and checks from the generous readers who sent them to a fictional construct, instead. They stole from authors, many of whom have felt compelled to disclose their real names, ages, the gender of their cats, and what they had for dinner on the night of October 14 (blood samples provided upon request) so as not to be tarred with the same brush. And they stole from honest people who are now given the side-eye when posting about their partners, special needs children, or even their travel plans because selfish actors have caused mistrust of all. Given how at home I feel in this community of readers and writers, I resented it the first time my delusion that we’re all coming from a place of authenticity and integrity was shattered. I resent even more that this is becoming so commonplace that we now just give a heavy sigh and say we suspected as much.

As I bare my flesh—I mean, release my book—this week (please let it go live this week and not become collateral damage in some bizarre Martian takeover of the internet), I want to say thank you to K.A. Mitchell, Felice Stevens, and Kade Boehme for welcoming me, offering advice, and delivering kicks to the tush when warranted. You’ve become some of my closest friends. And thank you to the gay romance community as a whole for giving my voice an outlet. I hope my underwear is clean, all the naughty bits in place, and that this is the start of a long relationship.

Jenna Kendrick writes male/male new adult and contemporary romance, her favorite genre to read. She lives in Upstate New York, where she spends the better part of the year trying to stay warm and dry. When she's not writing, she reads, has lost count of the number of times she's watched The Princess Bride and The Avengers, and drinks more coffee and tea than she'd care to admit. She shares her home office with her dog, Tally, and her cats, Loki and Tamiris.

Jenna spent most of her class time in high school writing bad poetry and short stories in which her teachers were the villains. She began writing in earnest in college, putting it aside for a few years to work as a teacher, paralegal, and product manager for several online services. In addition to writing fiction, Jenna also writes nonfiction technical books under another name.

Posted by Diverse Reader at 3:21 PM

Email ThisBlogThis!Share to TwitterShare to FacebookShare to Pinterest
Labels: A Piece of Me, December, Jenna Kendrick, LGBT, MM, Monthly feature