Promo Post: He's Behind You by Rebecca Cohen #Excerpt #Giveaway 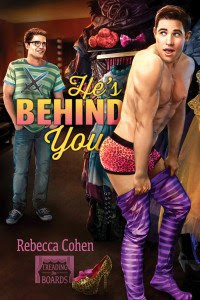 Blurb: A Treading the Boards Novella
It’s panto season for the Sarky Players, an amateur dramatics society based in Greenwich, South London. With the traditional Christmas play around the corner, it’s time to get ready for more larger than life performances—on and off stage.
While Craig Rosen is happy with his quiet life playing Warhammer and working in a university lab, a new colleague thinks he needs more excitement and drags Craig along to an audition for the Christmas pantomime, Aladdin.
Corporate lawyer Jason Carter accepted he’s gay a little later in life than most, but now divorced and in his late thirties, he’s ready to embrace who he really is. He can’t believe his luck when he runs into Craig at the audition and the cute younger man agrees to help him navigate his new life. There’s no doubting the attraction between Craig and Jason, but with Craig’s insecurities and Jason still finding his way, they’ll need to make sure they don’t veer off script.


Jason read the script. “I guess I should be grateful this part makes no attempt at innuendo but instead goes straight to blatant sex. But the last part, really—‘rub it hard and something will pop up’?”
Linda laughed. “That’s your dirty mind, Jason. No one else’s. And boy, we’ve missed it.”
“I’m glad somebody missed me.”
“Don’t go fishing for compliments, darling.” She winked. “Now, let’s start. Craig, you can be Aladdin. Jason, Widow Twankey. And Derrick, Wishy-Washy.”
“This is the third time you’ve made me read Widow Twankey, Linda. I’m beginning to think you’re hankering to see me in a dress.”
“Shush.”
Craig tried to stamp down his nerves as he read, not wanting to show himself up in front of Jason. Although he couldn’t cope with a main part, a small one might be doable.

“Brilliant. Thanks, guys.” Linda brought them to a stop before the end of the scene. Craig took that as a sign she’d heard quite enough and was about to give him his marching orders. All through the scene, he’d noticed Jason glancing at him, and he wondered if he had a smear of ketchup on his face left over from breakfast.
Linda sent them on their way with a promise they’d have a cast and crew list by the following weekend. Craig looked around to find Stuart and Ryan but couldn’t see them, and when he checked his phone, he realized he’d missed a text from Stuart.

Ryan’s feeling like shit so we’ve gone home. Sorry mate. I was going to suggest a few beers but lunch tomorrow instead?

He tapped out a quick reply, telling Stuart not to worry and for Ryan to get better soon. To be honest, he wasn’t too disappointed. Now he could head home and become better acquainted with the new pot of Khorne red paint he’d bought for the Bloodthirster.
Jason ran up to him as he was about to set out back to the DLR station. “Hey, I was wondering, if you didn’t have any plans, would you like to come to lunch with me?”
Craig glanced around to check Jason was talking to him and was surprised he was the only one in earshot. “Me?”
“Of course you.” Jason grinned, and Craig loved the way his eyes twinkled. “You implied on Friday you were single…. I thought I’d chance my luck.”
Butterflies mingled in his stomach. It had been ages since someone had asked him out on a date, drunk arsehole from Friday night notwithstanding, and he couldn’t help but be flattered. He had no idea when it would happen again, so he shouldn’t squander such an opportunity. “I… er… why not?”
“Great, there’s a brilliant pub around the corner. They do an excellent Sunday lunch.” 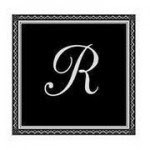 Rebecca Cohen is a Brit abroad. Having swapped the Thames for the Rhine, she has left London behind and now lives with her husband and baby son in Basel, Switzerland. She can often be found with a pen in one hand and a cup of Darjeeling in the other.

Want to win a copy of He's Behind You? Simply enter the rafflecopter below!
Contest will run until  December 14th!
Winner will be contacted via email so please check your spam!