Book of the Week: Part & Parcel by Abigail Roux #Review 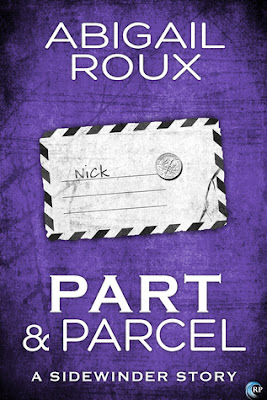 Nick O'Flaherty and Kelly Abbott had their happy ending in sight when a friend’s call for help almost ended with them losing it to the blade of a knife. Now, in the aftermath of near-disaster, both men are trying to heal and move on.

Moving on together, though, is harder than either of them realized it would be. Kelly struggles with simply being a lover instead of the Doc, while Nick is mired in his recovery. The distance between them inches along in stilted silence.

Desperately seeking solace, Nick finally gathers the courage to sort through the possessions his dear friend and fellow Sidewinder teammate Elias Sanchez left him when he died. Instead of comforting memories, Nick and Kelly find a stack of letters and strict instructions from Eli that prompt them to send out a call for assistance. With Eli’s letters in hand, Sidewinder sets out on one last mission together, seeking peace and absolution from beyond the grave—and from each other.

Sidewinder is back and I have to say I was surprised by this book. It isn’t the action and explosions I’m used to. This was a much more sentimental addition to this series… to these guys. A lot of self-discovery and the uncovering of lies. We found out A LOT of stuff about Nick, Kelly, Owen, Digger, and Ty in this book. I kept reading it thinking, “Any minute now a building is going to explode.” But nope. It was tempers that exploded. There was so much emotion to this story. I felt like, in order for there to be a future for these guys they needed to clear out the cobwebs. There was so much mess in their heads I’m shocked they could stand. There was of course love. Hot intense love. That was a beautiful thing. This book was a long time coming and I adored every second of it.
Posted by Diverse Reader at 5:55 AM