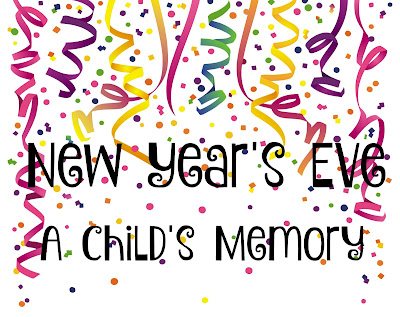 As a child New Year’s Eve was the coolest time ever. I got to stay up later than any other night. I would see the ball drop and watch Dick Clark’s Rockin New Year’s Party. Then when it was all done one network always won the right to air a “never before seen on movie on TV.” It always came from the theater and it was amazing.

Every New Year’s Eve we’d order Chinese Food. I don’t know why that ever became a tradition but it did. I’d eat it throughout the night. My mother, on top of all the Chinese, would make pigs in a blanket, a cheese roll, her crab salad, and a million other things. Anyone who was there was in for a feast.

Some years we had a full house. We’d play a ridiculous amount of board games from Balderdash to Trivial Pursuit. There was Charades and music.  I remember giggling as my dad danced with my mom in our family room.

We would all count down, I’d take a sip of champagne, gag because I thought it was vile. Some people would eat a piece of herring… again, gag. No! Then we went outside on our deck with noise makers. We let the whole neighborhood know it was a new year. As if they didn’t know! My mother always made me put a dollar in my left shoe and I had to take my first step inside the house with that foot. It was good luck apparently.

New Year’s Eve, as a child, was one of my most favorite days. I never understood when my mom would cry when Auld Lang Syne was played. I saw all the greatness of a new year and because of that I would laugh and smile.

That is what being a kid is all about. Seeing the possibilities in a new year. Not looking back. Because you gotta look where you’re going, not where you’ve been.

I hope you all embrace your inner child this New Year’s Eve. 2016 is an unwritten book and you have 365 pages to create it. Be the best author you can be!
Posted by Diverse Reader at 9:10 AM