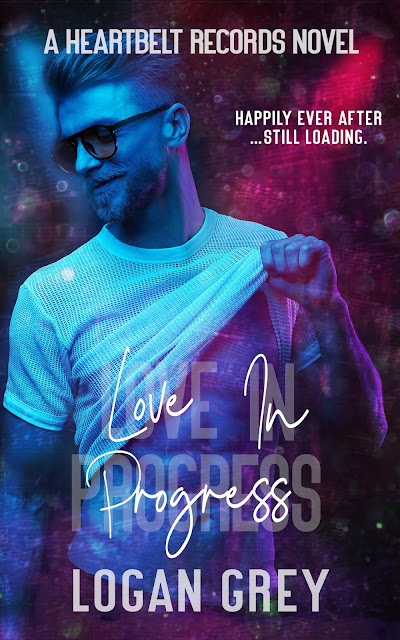 After years of hustling their music and uploading vlogs, Jayce and Blaine have finally landed the record deal of a lifetime.

When the label gets a taste of their chemistry on screen, the album vision is changed from a lyrical tale of two friends to one of a budding romance.
And that’s not all.

Even when the cameras stop rolling, Jayce and Blaine are expected to sell their new story.

The thing is, for Jayce, it’s a little too easy to play the role of 'boyfriend' instead of 'best friend', until he realizes it’s not pretend at all.

With a life-long friendship and life-changing careers on the line, they’ll have to put their feelings aside and fake it ‘til they make it, or watch their dreams go up in flames.

*This friends to lovers romance is a standalone in the Heartbelt Records Series, and can be read as such.


“So, to celebrate, we’ve decided to read some of the questions you tweeted us. But there’s a catch—”

“For us,” Blaine interjected, and reached down to their feet to pull up a bottle of wine.

Jayce turned both palms face up to showcase the wine and grinned. “We have to drink every time we see #Jaine mentioned.”

“I think we’re going to die,” Blaine groused. After twisting the cap off the bottle, he pulled both of their mugs closer and tried to pour without making a mess. Nerves and excitement were so mixed up inside him, he felt like a bottle of champagne, one shaken and ready to burst with the emotions.

After three years of going at it alone, Blaine had begun to let go of the dream of signing to a record label. And just when he’d begun to accept that no label would offer them what they deserved, Heartbelt Records came into their lives.

There he sat, announcing to their fans that their lives were changing. So yeah, you could say it was a big deal, hence his shaky ass hands.

Chill out, he told himself. If you spill wine on Jayce’s clothes, he will kill you.

“Don’t worry, honey, I’ll hold your hair back when you’re sick later,” Jayce responded to his comment and took the mug from him, avoiding spillage. As he leaned back, his crop top slid up his torso, a tease and a statement all in one.

Blaine ran a hand through his short hair out of reflex. It was buzzed on the sides, just like Jayce’s, but he kept his blond locks pushed back with a side part instead of letting the fringe fall into his face. He was also dressed in nothing more than sweatpants and a tee, whereas Jayce wore a highlighter bright, orange crop top and black skinny jeans ripped at the knees. Because of the camera placement, viewers would only see them head to waist, but Jayce never did an outfit halfway.

Patting his hand around on the couch, he found his phone and tapped the blue icon of the Twitter app.

“Ready?” he asked, and gestured to the wine.

“For alcohol poisoning? Bring it on,” Jayce teased, and sent the camera a flirty look before scooting closer on the couch.

To celebrate Logan's new release, we are giving you a chance to win a $20 Amazon Gift Card

Check out the series so far:


The Deeper You Go

Logan resides in Tennessee, convinced her southern twang is part of her charm. With two cats and a dog, her hands are full, and not just of treats like her pets would like to believe. As a full time author, she dedicates all of her time bringing to life different characters and developing new worlds for her readers to lose themselves in. And more often than not, she loses herself in them, which is her favorite place to be: with a cat in her lap, a snack in hand, and voices in her head.