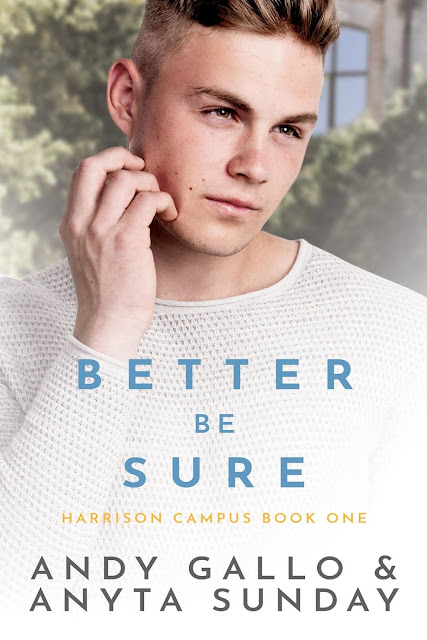 Better Be Sure by Andy Gallo and Anyta Sunday

"Better Be Sure" is a sweet, slow burn M/M romance with a heart-pounding HEA. This New Adult, college, opposite sides of the tracks novel can be read as a standalone and in any order.

Book Blurb:
Orphan Jackson Murphy just staked his legacy on a bet.
Holy shit, his impulsive ass is in trouble.
Bring a guy to the fraternity formal? Pfft. Easy. Won’t be him getting kicked out of the house.
So what if his luck with guys on campus has been shitty? Ed Knowles is Jack’s winning ticket.
Tall, handsome, hardworking—and he doesn’t go to Harrison. One serendipitous meeting, and sparks—and coffee cups—are flying.
But with every stolen look, every secret kiss, every clandestine touch Ed becomes more than just an answer to a bet.
And these cloak-and-dagger meetings that set Jack on fire? They mask one tiny, enormous obstacle: Ed’s not out.
What does Jack do now?
Hold on to his legacy… or his heart?
--
"Better Be Sure" is a sweet, slow burn M/M romance with a heart-pounding HEA. This New Adult, college, opposite sides of the tracks novel can be read as a standalone and in any order.
--
A note from Andy Gallo and Anyta Sunday:

We want readers to enjoy a good, new adult romance with two MCs who help each other overcome what’s holding them back from finding love. 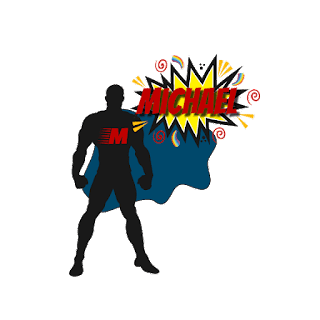 A long time ago (and I mean A LONG, LONG, LONG time ago), I dated a closeted guy.  I, of course, was out, and had no problem being seen out in public with him.  He, on the other hand, was incredibly paranoid that someone would “figure it out” and cause trouble.

So, I can understand Jack’s dilemma after meeting Ed and finding out that he’s still in the closet.  Throw in the fact that Jack is still reeling from the death of his parents, living with Marcus (his brother/best friend), in the room of the frat house once shared by their fathers, and a stupid bet he made with another frat brother.  Yeah, I’d be a little stressed.

Given that set up, this book could have easily fallen into one of a multitude of clichés.  I was glad that it didn’t.  There are a lot of side character, so sometimes it can get confusing as to who is who.  But they all basically break down into two camps, especially when it comes to the bet.  Pro-Jack, and Anti-Jack.  That said, I particularly enjoyed the relationship between Jack and his best friend/brother, Marcus.  Marcus can be kind of a bonehead at time, but he always has the best of intentions and Jack’s best interests at heart.

There’s only one way this can really end, it is a romance after all, but I must say that it’s still quite satisfying.

On Saturday evening, Ed picked Jack up from the bookstore parking lot. Jack had been anticipating the evening since the moment he’d agreed to come. It wasn’t like he was being introduced as the boyfriend, but still….
“Last guy I dated was spring semester last year.” How on earth had their conversation turned to their exes? “He turned out to be an asshole.”
“Sorry.” Ed didn’t press it, but Jack could tell he wanted to know more.
“It happens. Once I mentioned how Dad and I went to yard sales, and he told me he was sorry I had to go to such a ‘low class’ event. His words, not mine.” Dumb fuck. It wasn’t the money that mattered.
“Nice guy.”
“Yeah, I know. I told him a few things about me and my family that I thought would be private. My mistake. After we broke up, he made sure to tell anyone who would listen some of the more personal things we shared. Enough things that I really haven’t wanted to date anyone else from campus.”
Ed shook his head and swore under his breath. He settled a hand on the back of Jack’s neck and gently squeezed. “Sorry, Jack. The guy sounds like an ass.”
Jack sighed into the touch. “What about you? You mentioned an ex….”
“He was a guy I knew in high school. We banged into each other at the library a couple of years back. When he noticed I was checking him out, he and I got… friendly.”
Jack snickered.
“He wanted our relationship to be in the open. Didn’t care who knew, but I did. Told him I wasn’t ready. One day I get home and a friend of mine is sitting on my steps, on edge, nervous. Evidently he let slip about us to force my hand.”
“That’s pretty shitty of him.”
“Things didn’t work out.” Ed shrugged. “He certainly wasn’t ‘the guy’ worth the risk of coming out.”
Jack’s breath stalled. Hope and frustration and disappointment glugged through his body, settling heavily in his feet.
Stop being ridiculous. You’ve only known him three weeks!
He was meeting Ed’s family, though.
As a “friend.”
Ed pulled his hand back and changed gears. “I guess I understand how you felt betrayed by your ex.”
Jack laughed tightly. “Because of him, I’ve acquired a reputation as a stuck-up snob who thinks he’s better than everyone else.”
“How’d that happen?”
“Got a few minutes?”
“Yeah, I think so. I’m just driving this hot guy back to my place. I don’t think he’ll mind.”
Jack twisted around in the small cab. “I think he left. You’re stuck with me.”
“Not a problem. You’re more interesting anyway.”
Heat stole over Jack’s face. “You probably know that Harrison has its share of kids from wealthy families.”
“Just a few.”
“Yeah, well, Kieran’s family is one of them. I overlooked that because he seemed nice.”
“You don’t like your own?”
Jack had entered one of those taboo date topics and tried to pick his words carefully. “Marcus and I are in the weird minority. Mr. Reynolds is a partner in a big law firm, and Mrs. Reynolds is a doctor in a small medical practice. But we’re considered to be at the lower end socially at Harrison. We’re not old money or hedge fund daddy rich.”
“What about the kids who are on scholarship or get financial aid?”
“Assholes like Kieran refer to them as ghetto.”
“Really nice guy.”
“I did say he was an asshole.” If only he’d noticed it sooner. “These kids with rich parents tend to travel in groups and have adopted a pack mentality.”
“What?” Ed laughed. “They surround their prey and take turns going in for the kill?”
“More like there is a pecking order, and those of us not at the top need to feel honored when those above us are generous enough to find us interesting.”
“Let me guess. You didn’t display the appropriate amount of gratitude.”
“Evidently not.” Especially since he had more waiting in his trust fund than any five combined. He was glad he never shared that with Kiernan. “Saying no isn’t considered good form for someone of my social standing. Who knew?”
“Who indeed.”
“And the more I said no to them, the more of a snob I became….” He rolled his hand, then shrugged.
“Snob? You? That’s not what I see.”
What do you see? “Thanks.”

Andy Gallo prefers mountains over the beach, coffee over tea, and regardless if you shake it or stir it, he isn’t drinking a martini. He remembers his “good old days” as filled with mullets, disco music, too-short shorts, and too-high socks. Thanks to good shredders and a lack of social media, there is no proof he ever descended into any of those evils.

Andy does not write about personal experiences and no living or deceased ex-boyfriends appear on the pages of his stories. He might subconsciously infuse his characters with some of their less noble qualities, but that is entirely coincidental even if their names are the same. And while Andy leaves the hard sci-fi/fantasy for his alter ego, Andrew, in his mind a touch of the supernatural never derailed a good relationship.

Married and living his own happy every after, Andy helps others find their happy endings in the pages of his stories. He and his husband of more than twenty years spend their days raising their daughter and rubbing elbows with other parents. Embracing his status as the gay dad, Andy sometimes has to remind others that one does want a hint of color even when chasing after their child.

A bit about me: I'm a big, BIG fan of slow-burn romances. I love to read and write stories with characters who slowly fall in love. Some of my favorite tropes to read and write are: Enemies to Lovers, Friends to Lovers, Clueless Guys, Bisexual, Pansexual, Demisexual, Oblivious MCs, Everyone (Else) Can See It, Slow Burn, Love Has No Boundaries. I write a variety of stories, Contemporary MM Romances with a good dollop of angst, Contemporary lighthearted MM Romances, and even a splash of fantasy. My books have been translated into German, Italian, French, and Thai.

Sign up for Anyta's newsletter and receive a free e-book: http://www.anytasunday.com/newsletter-free-e-book/
Join my Facebook group to chat all things Slow Burn Romance:
https://www.facebook.com/groups/SlowBurnSundays/
You can also find me here: www.anytasunday.com
For information about new releases and freebies, follow me on BookBub:
https://www.bookbub.com/authors/anyta-sunday