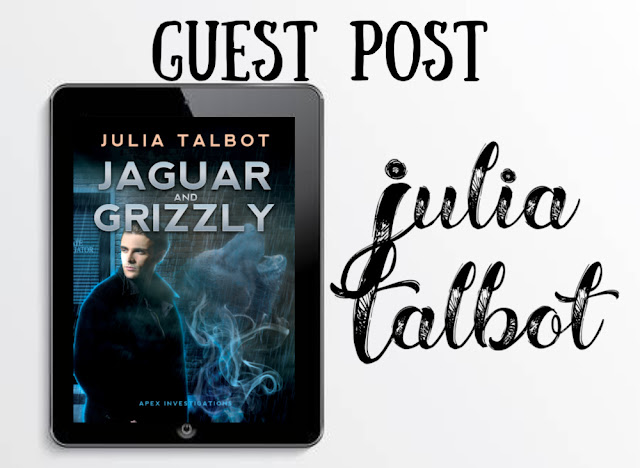 Diverse Reader is super excited to have Julia Talbot on the blog today! She's stopping by to talk about shifters and her book Jaguar and Grizzly. So, get a drink, get comfy, and enjoy.

Specifically, shifter PIs. I have a series called Apex Investigations, and I just released book two, which is about a jaguar shifter named Brock and a bear shifter named, well, Locke, but he goes by Grizz.

Such an interesting pair, and so much fun to write.

I try hard to match the elements of the animal up to the shifter, so jaguar Brock is slinky, a little moody, Brazilian, and really kind of sneaky… Grizz is more… forthright. More direct. Really strong. Dangerous but sort of harmless looking to begin with. Together, they make a formidable pair, even if Apex seems to be having the worst run of luck in history.

The other fun thing about this one was I got to take the fated mate trope and make it into a second chance story. I love both tropes. Okay, I might be the second tropiest writer on earth after my wife, BA Tortuga. Anyway, Brock and his bear denied that they had a mate bond years ago, breaking up and spending years apart. Now they have a chance to be together again, scars and all, they have other people fighting to keep them apart, which is better than their own stupidity, I guess…

There’s something about fated mates and shifters that really calls to us in romance. I think it’s the soulmate idea. We read romance because we believe that there’s someone out there for everyone, but since we try to make sense of the universe, we want to believe it’s not random, right? We want to believe it’s meant to be, that there’s the one puzzle piece out there that clicks into ours.

So fated mates are the perfect balm to that part of us.

Which is why I love Brock and Grizz so much…

Anyway, I hope y’all with give them a look! 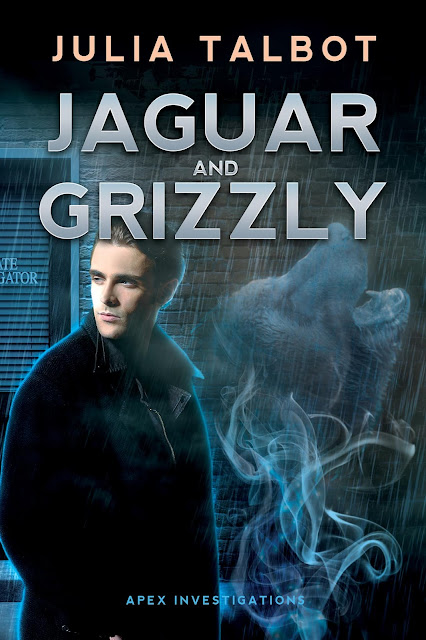 A client with a cheating wife, a warehouse of cult members, and someone with a deadly vendetta—just a day’s work for Apex Investigations. Or is it?

Bear shifter “Grizz” Locke is ex-military and ready for PI work, which if not exactly safe seems less likely to get him killed on a daily basis. The added bonus of teaming up with former lover, Brock, a jaguar shifter, is all the incentive Grizz needs.

Brock can be a grumpy kitty, but he’s found a home and family at Apex. And now as luck would have it, he has a chance to rekindle his romance with Grizz. They might even rebuild their mate bond, severed years ago—as long as they don't manage to get killed first.

When an enemy targets the Apex team, Brock and Locke will fight with all they have to protect their own. To enjoy life and love as fate intended, they will have to find out who wants them dead before someone at the agency pays the ultimate price.

Julia Talbot lives in the great Southwest, where there is hot and cold running rodeo, cowboys, and everything from meat and potatoes to the best Tex-Mex. A full time author, Julia is a hybrid author, published by presses like Dreamspinner and Changeling, as well as indie. She believes that everyone deserves a happy ending, so she writes about love without limits, where boys love boys, girls love girls, and boys and girls get together to get wild, especially when her crazy paranormal characters are involved.

Posted by Diverse Reader at 5:21 AM