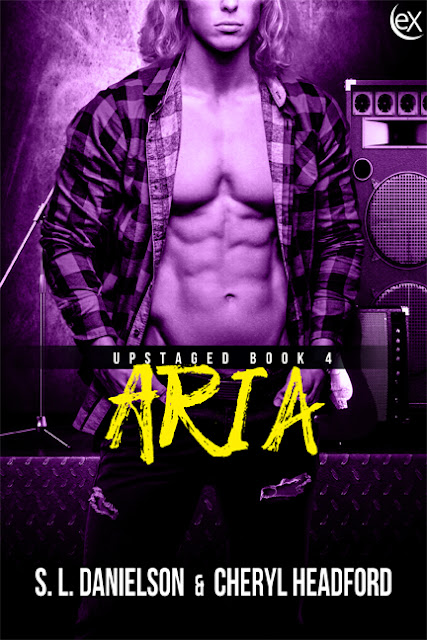 You think you’re holding someone close, but if you’re not paying attention, they could slip right out of your arms and fall.
Asher and Erik are getting married, but Asher isn’t happy about the pressure being put on him by their families and unwittingly by Erik himself. Issues that have plagued him for a long time come bubbling to the surface and threaten to overwhelm him. Although he cries out for help, no one hears; instead they write it off as Asher throwing a tantrum again. Only Angel sees the cracks, but it’s too much for him to handle on his own, although he tries.

The pressure builds, and even though there are breakouts, still no one sees the extent of the problem until the night before the wedding, when Asher is confronted by Erik in front of all their family and friends, and bolts.

Fortunately, Asher is rescued by Vince’s Uncle Tony, who makes him an offer he can’t refuse.

The Band heads off to London for a three-month tour, and not everyone is happy about it. Vince is stressed out and worried that Angel is not being entirely faithful. Should he say something? Then Connor meets an old friend, just when he starts having doubts about his relationship with Angel, and the fur starts to fly.

Will any of the couples survive?

Excerpt
The sunset over the fields was a breathtaking sight. Asher couldn’t help but appreciate the wonderful view of the surrounding countryside, such as it was, from Vince and Billy’s home. Three sides consisted mainly of houses with large gardens. On the fourth side, however, there were woods and fields all the way to the horizon, and over them, the sun was going down.

He had never watched a sunrise or sunset and failed to be moved. He loved everything about those times. There was a different quality to the light that appealed to his artist’s eye, and a feeling of clarity that calmed his mind. Tonight, however, he wasn’t calm. Not even the drawing pad on his knees and the charcoal pencil in his hand could bring him the peace he usually felt when he was immersed in his art.

Truth was, he hadn’t been able to find peace for a long time—weeks, maybe more. He was blaming it all on the wedding, convincing himself that when it was all over the peace would come again, but the truth was, he didn’t know if it would. Another clearer, more honest corner of his mind was telling him the wedding wasn’t the problem at all.

Asher sighed and put down the pencil, hugging the book to his chest, and stared out into the gathering dusk. He thought about his other sketchbook, the one he always left at school. He thought about all the sketches he’d been working on so feverishly, more and more and more. What was he thinking? What the hell was he thinking? He was playing such a dangerous game, and sooner or later he was going to get caught. Then what? He should stop. He knew he should stop. He should never have started, but—

Erik coughed to announce himself. “It’s gorgeous out here, isn’t it? They chose the perfect spot. The yards are so manicured…the meadows, the woods…a beautiful backdrop.” He stepped closer. “Billy and Vince make such great decisions together…they always have. Do you know what the best decision I ever made was, Asher?”

“No, but I know what the worst one was.” He looked up at Erik, taking in the tall figure with his broad shoulders and long blonde hair. Erik was his Viking, his Nordic god. He was too good for him, way too good. Asher was nothing but a screwed up emo freak, with a mind so twisted it was only a matter of time before it imploded. What the hell was Erik even doing with someone like him? “We should never have got together in the first place. You’re too good for me. You deserve someone who isn’t a fucked-up nutjob.”

Erik shook his head and sat down next to him. “Wrong. The correct answer was asking you to marry me. As for you being a fucked-up nutjob and me being too good for you, are you kidding me?” He laughed and picked at the grass. “Asher, you’ve driven me crazy since the beginning, and granted, I didn’t know how to handle a lot of it, but we got through it. We survived the insanity in London all on our own. Look at me.” He tipped Asher’s face to look at him. “You’re the love of my life, and nothing you say will persuade me otherwise. Do you even realize that? You can’t get rid of me.”

S.L. Danielson began writing at the age of six. She knew it was her calling from the moment she put pen to paper. In her teens, she began writing alternative works, and the genre stuck. She also wove more elaborate tales and finally, in her college years, began to weave her new love of male romance into long novels.
She is classically trained in business, accounting, and education, holding both undergrad and graduate degrees. Her other hobbies include painting, gaming, and spending time with her husband and two cherished cats.

Cheryl Headford was born into a poor mining family in the South Wales Valleys. Until she was sixteen, the toilet was at the bottom of the garden, and the bath hung on the wall. Her refrigerator was a stone slab in the pantry, and there was a black lead fireplace in the kitchen. They look lovely in a museum but aren’t so much fun to clean.
Cheryl has always been a storyteller. As a child, she’d make up stories for her nieces, nephews, and cousin, and they’d explore the imaginary worlds she created, in play.
Later in life, Cheryl became the storyteller for a re-enactment group who travelled widely, giving a taste of life in the Iron Age. As well as having an opportunity to run around hitting people with a sword, she had an opportunity to tell stories of all kinds, sometimes of her own making, to all kinds of people. The criticism was sometimes harsh, especially from the children, but the reward enormous.
It was here she began to appreciate the power of stories and the primal need to hear them. In ancient times, the wandering bard was the only source of news, and the storyteller, the heart of the village, keeping the lore and the magic alive. Although much of the magic has been lost, the stories still provide a link to the part of us that still wants to believe that it’s still there, somewhere.
In present times, Cheryl lives in a terraced house in the valleys with her son and two cats. Her daughter has deserted her for the big city, but they’re still close.

And if you want exclusive snippets, gossip, more information about the group and what our boys look like as Sims then you can have an exclusive Backstage Pass
Posted by Diverse Reader at 6:47 AM