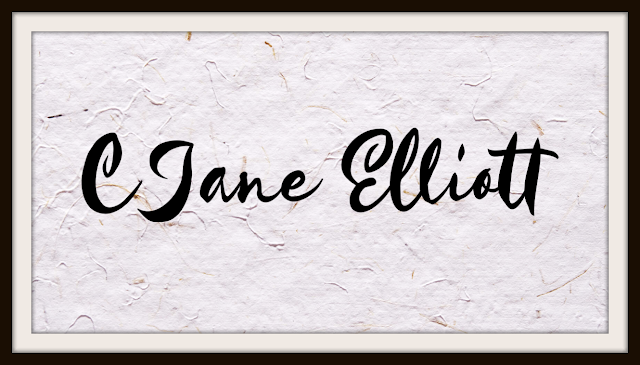 Diverse Reader is happy to have author CJane Elliott with us today. She's talking about her two amazing novellas. So, check them out.

Hi there, everyone! A big thank you to Meredith King for hosting me on Diverse Reader today. I wanted to share about my two novellas in the contemporary New Adult Campus Connections series. These stories feature a trio of friends at a DC-area university—Eric, Jerry, and Tyrone—and so far Eric and Jerry have found their HEAs. 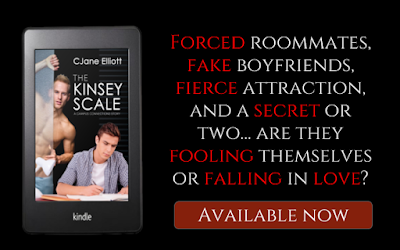 The Kinsey Scale has the classic forced college roommates situation with some fake boyfriend action and a few secrets thrown in to make things interesting. Eric is adorably clueless about how Will feels through much of the story, but they manage to find their happily ever after with a little help from their friends.

Life is good for Eric Brown. He’s a senior theater major, an RA for a freshman dorm, and has a great circle of friends. Single since sophomore year, Eric isn’t looking for love. Then Will Butler—fellow senior, co-RA, and the cutest guy Eric’s ever seen—walks into his dorm. Will has a girlfriend he sees off campus—a minor disappointment that becomes a major problem when a housing shortage causes Will and Eric to become roommates, and Eric is forced to witness Will’s hotness day in and day out. For protection, Eric asks Jerry, his ex-boyfriend, to pretend they’re still together. Jerry warns him it’s a stupid idea, but he reluctantly agrees.

Too bad it won’t save Eric from losing his heart.

Will Butler has never believed in himself. His dysfunctional family saw to that. Although Will has loved music since childhood, he’s never seriously considered pursuing it, and the person he’s dating doesn’t encourage him. Then he and Eric Brown become roommates, and everything changes. Eric believes in Will and his talent. He’s also  gorgeous and playful and fast becoming Will’s best friend. And that’s not good, because Will is hiding some big things, not only from Eric but from himself.

“Elliott delivers on the angst, the fluff, the unrequited crush, the sexual tension, the BIG reveal, and the bedroom gymnastics in just the right doses to make The Kinsey Scale an entertaining friends-to-lovers romance.” –Wicked Reads Reviews 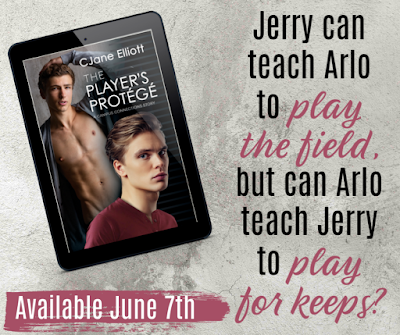 The Player’s Protégé starts after the events of The Kinsey Scale, but can be read as a stand alone. This story is a modern-day Pygmalion meets Dangerous Liaisons situation. Cynical Jerry is tasked to turn sweet Arlo into a player and his friends bet he can’t do it. Jerry may win the bet, but he ends up losing his heart, while Arlo learns to go after what he really wants.

College senior Jerry Helstrom survived a gay childhood in Texas by being fierce and fabulous. At school he gained a reputation as a player and kept his heart so guarded that he’s forgotten he has one.  When his friends bet him he can’t help innocent Arlo Barnes, Jerry takes on the challenge and quickly finds himself drawn to his sexy mentee.

Arlo wants to make up for lost time. He’s been dumped by his only boyfriend and needs help getting himself out there. Enter Jerry Helstrom, player extraordinaire and happy to provide Arlo with some hands-on sex coaching. Jerry encourages Arlo to ask for what he wants in sex and in life, something Arlo struggles with despite his martial-arts black belt. The struggle deepens when Arlo discovers that what—or who—he truly wants is the seemingly unattainable Jerry Helstrom.

“Much like the first book, the author tells a full-length story in a novella-sized package, with feels and heartache and a little drama and love and holy hot boysecks, Batman…. The author does a fabulous job exploring and growing these characters in under 100 pages, while delivering a complete storyline.” –My Fiction Nook

Tyrone, the third friend in the trio, needs his happily ever after and I’m in the process of writing his story. It’s going to be a second chance friends to lovers romance with Tyrone’s best friend from childhood—the one Tyrone always assumed was straight.

After years of hearing characters chatting away in her head, CJane Elliott finally decided to put them on paper and hasn’t looked back since. A psychotherapist by training, CJane enjoys writing sexy, passionate stories that also explore the human psyche. CJane has traveled all over North America for work and her characters are travelers, too, traveling down into their own depths to find what they need to get to the happy ending.

CJane is an ardent supporter of LGBTQ equality and is particularly fond of coming out stories. In her spare time, CJane can be found dancing, listening to music, or watching old movies. Her family supports her writing habit by staying out of the way when they see her hunched over, staring intensely at her laptop.

CJane is the author of the award-winning Serpentine Series, New Adult contemporary novels set at the University of Virginia. Serpentine Walls was a 2014 Rainbow Awards finalist, Aidan’s Journey was a 2015 EPIC Awards finalist, and Sex, Love, and Videogames won first place in the New Adult category in the 2016 Swirl Awards and first place in Contemporary Fiction in the 2017 EPIC eBook Awards.