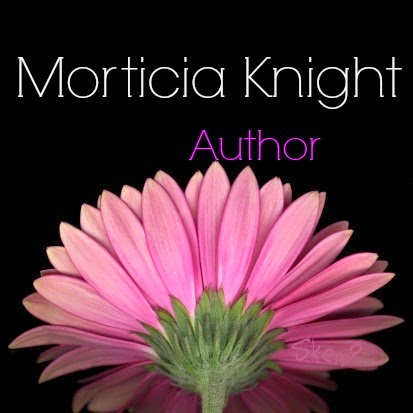 Morticia Knight author of such series as Sin City Uniforms, Uniform Encounters, and Bound by Pleasure is my spotlight author today! I am SO THRILLED! Her work is hot, entertaining, and so much fun! Mystery, intrigue, and smokin' writing... if you like that then this is a writer for you.

She sat down for an interview, answered all my questions. She also will be giving one lucky reader a chance to win any of her backlisted books! YAY! But first, let's take a look at some of her work. 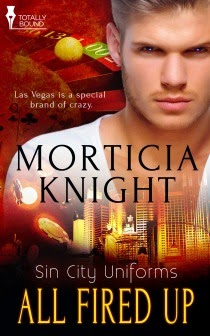 Officer Shawn Everly patrols the Strip. Fireman Trent Marshall saves him when danger strikes. But it’s uncertain whether Trent can save himself from getting his heart broken by Shawn.

The party never ends on the Las Vegas strip, but neither does the danger. Officer Everly is new to the beat, having recently relocated to Vegas from Los Angeles. Foot patrol on The Strip is a demanding assignment because he’s up close and personal with the public. But what he’d really like to do is get up close and personal with Station 32’s hunky fireman, Trent Marshall.

Trent has been a fireman for over ten years and is dedicated to his job. He’s built tough and is a no-nonsense man of few words. At a local blood drive, Trent meets the handsome new officer on foot patrol, but won’t let himself get too close. He’s lost love before when his policeman lover was killed in the line of fire.

During an emergency, Trent’s over-protective instincts kick in when he believes Shawn is in harm’s way. He ends up embarrassing and angering Shawn in front of their fellow officers, which seems as though it will end any hope of Trent having a chance with the young man he can’t push from his mind.

Shawn can’t decide whether he wants to punch or kiss Trent. Kissing wins. Once they spend some time together away from the stresses of their jobs, they find that they’re not just compatible—they’re combustible.

But Trent can’t seem to accept that there are hazards that come with working in law enforcement. Right as they’re discovering how much they mean to one another, the danger escalates on The Strip. The underground vigilante group, The Citizens Against Immorality, have raised the stakes. Will Shawn and Trent be their next targets? 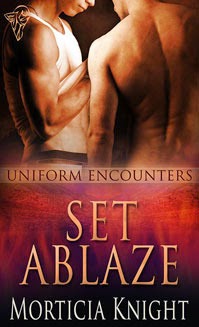 Hunky fire chief Eric is out of the closet after twenty years of marriage. Can he find true love, or will a spate of arson fires destroy his chances with Tom, the sexy young fire-fighter?

Eric is a fire chief in Mesa, Arizona where he’s lived all of his life. A hunky Norse god like man, he has finally come out of the closet after twenty years of marriage. Now his wife hates him, his son won’t speak to him, a town crazy wants him fired, and there’s a rash of arson fires destroying some of the beautiful historic homes in the area. To let off steam, he’s been tempted to explore his long repressed sexuality with his son’s twenty year-old friend.

Tom, a twenty-eight year-old fire-fighter from Texas, is desperate to get away from his dad’s prejudice about his sexuality, and an unstable relationship that just recently ended. He takes a temporary position in Mesa where he sets eyes on the most gorgeous male specimen he’s ever seen in the form of the fire chief, Eric Anderson. Convinced the chief is straight, he accidentally catches him one night with a young guy, and is now determined to let the chief know he’s interested.

Eric is adamant that they can only be friends, even though he finds the sweet young Tom adorable. The pressures on Eric increase as his ex-wife becomes a suspect, and the town crazy tries to blame the arson fires on him. Will he allow himself to find real love with the sexy Tom, or will his world be destroyed by all of the city’s accusations and his family’s lack of acceptance? 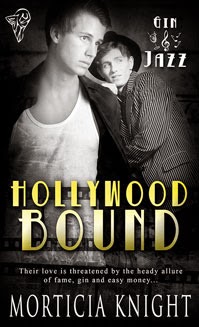 Jack and Nick seek fortune and adventure in the silent film era of Hollywood. But their newly-expressed love is threatened by the heady allure of fame, gin and easy money.

Sweet and innocent nineteen year-old Jack has loved the older and more street wise Nick from almost the first time he met him. Nick has taken care of him ever since Jack arrived in New York after he was beaten and thrown out of the boy’s orphanage for messing around with one of the guys there. They share a passion for silent films and have dreams of heading west to make their fortunes building sets for the studios. If only Nick felt the same passion for Jack, and wasn’t already engaged to a gal back in Philly.

Nick’s temper sometimes gets the best of him, but that’s only because he worries about Jack – Nick is all the poor kid has. But he’s also terrified about the way he’s been feeling towards Jack lately. They’re the kinds of feelings he should be having for his fiancé—Penelope—and never for a man. His only goal is to get them both to Hollywood, where he’s sure they’ll be rolling in the dough in no time, and where everything will all work out the way it should.

Hollywood isn’t exactly what they’d thought it would be. There are plenty of gin joints, jazz, money, parties and sex—but everything comes with a hefty price. Everyone they meet—from Trixie Fox, the ditzy up and coming starlet, to Bernie, the foreman who gets them their first studio job—seems to have a hidden agenda. Can the newfound love between Jack and Nick survive the tawdry mess that makes up the glitz and glamour of the celluloid kingdom, or will their own secrets tear them apart forever?
Make sure to check out all Morticia Knight's books: MK on GR

There are 2 books to your Sin City Uniforms Series (All Fired Up and Copping an Attitude) Are there any more books coming in that series?

Justice Prevails (Sin City Uniforms 3) will be available at Totally Bound publishing on early download March 6th, then everywhere April 3rd. This one tells Beau’s story, who some may remember as the detective from Copping an Attitude. Then in 4, I tell Brett’s story. I couldn’t leave him without an HEA after his breakup from Parker, now could I?

As a writer, what has been the hardest habit to break? For example, one author told me they had a hard time getting themselves to stop using the word "that"

I think ‘that’ is a toughie for everyone. Even editors don’t agree on the usage! I also have a problem with ‘but’ and ‘just’. I do a search/find on them before I turn my manuscripts in to make sure I haven’t gone crazy with them.

If you could collaborate with any author, who would you choose?

I would choose Sean Michael in a heartbeat, but I can’t even begin to imagine why he’d need anyone to collaborate with! He’s too amazing all by himself.

The biggest problem for a full-time writer is the lure of social media. It’s too easy to get caught up in Facebook, twitter, Goodreads or blog posts until you discover your entire day has disappeared. I’m still working on my ‘setting boundaries’ skills. I’m very much an ‘ooh, look a squirrel!’ kind of girl.

On the plus side, I’ve met some really wonderful people from all over the world – readers, fellow authors – none of that would’ve been possible without the benefit of social media.

In the end, it’s all about balance.

If you were to write a memoir about your life, what would you title it?

What the Hell Happened? Seriously – I have no idea how I got from where I was to where I am now. It’s a head spinning tale.

When you sit down to write a book is there a method to your madness or do you just sort of wing it?

To some, my methods probably are madness. I always have a complete synopsis written ahead of time, print it out and refer to it. But I never stay within the confines of it. The latest one (Hampton Road 4) I completely tossed out a major suspense plot point because the chemistry and angst between my characters was so strong – I couldn’t switch focus.

In addition, as ideas or plot points or even unplanned side characters pop into my head as I write, I’ll jot them down on the printed synopsis to keep track. My final notes look like a crazed group of scribblings.

What are some of your favorite moments of being a published author?

Being a published author! But it’s also nice when people reach out to me to let me know one of my stories affected them in some way. I think every author appreciates that above anything else – I know I pour a lot of emotion into my characters and their stories, and I always hope others are touched by their journey to love.

What was your favorite book as a child?

Oh boy – I had a lot. But one that stands out which I reread several times was called ‘From the Mixed up Files of Mrs. Basil E. Frankweiler’. It was about a young girl (12 I think) who runs away from home because no one appreciates her. Her bratty little brother tags along or he’s going to tell, so she’s stuck with him. She’s a true nerd, so she’s figured out how to live in the Metropolitan Museum of Art in New York. She sneaks in with a school tour group, hides in the restrooms until the place closes, has the security guards schedules figured out, steal coins from the fountain to eat – it’s an awesome story!

The whole adventure becomes a mission when a little statue of an angel shows up at the museum – a purported Michelangelo. She becomes obsessed over discovering its authenticity, and eventually hunts down and confronts the donor – Mrs. Basil E. Frankweiler. Man, now I want to read it again! I think it was even made into a TV movie.

Okay, thank you so much, Morticia!

The fabulous Morticia Knight is doing a giveaway and one of YOU lucky people will win ANY of her backlisted books! How exciting! Enter the rafflecopter below contest will run until March 6th. Winner will be contacted via email so check your spam!
Thank you Morticia so much for being here today and sharing your talent with us.