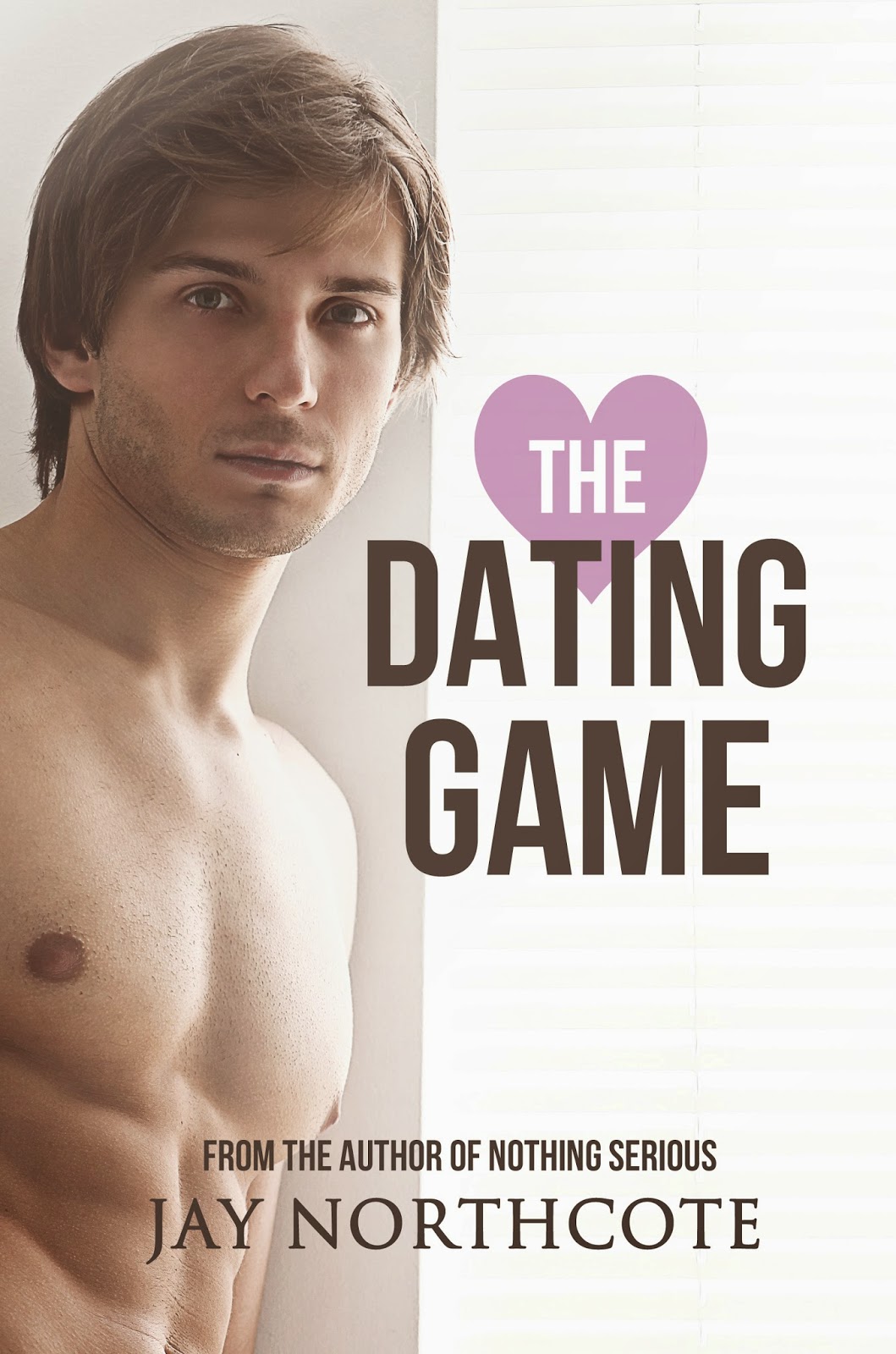 Five sex-free dates—how hard can it be?

When they were at uni, Owen always had a bit of a crush on Nathan. But Nathan was apparently straight, and Owen was too busy with other guys to take his crush seriously.

When Nathan moves back to Bristol after a year away, Owen hears that Nathan has come out of the closet, and he propositions him. Nathan doesn’t want to be just another notch on Owen’s bedpost, though, so he challenges Owen to prove he can be serious: five dates before they have sex.

Owen doesn’t think that sounds too difficult. He’s expecting Nathan to find his charms irresistible anyway. But as they grow closer, Owen begins to care more about proving himself to Nathan than he does about getting him into bed.

“So,” Owen began. “I gather you’re into cock now?”
Nathan’s eyes widened, and his cheeks flushed pink. “Um…. Yes?”
“Cool. So, do you wanna get out of here and go someplace to fuck, or suck, or whatever?”
Nathan raised his eyebrows. “Seriously?”
“Yeah.” Owen let his gaze slide down over Nathan’s torso to land on his crotch. It looked like Nathan might be getting a little hard. Either that, or he was a shower rather than a grower. “I always thought you were hot. I just never knew you swung my way. So how about it?”
Nathan cleared his throat and shifted uncomfortably in his seat. He was definitely getting hard. Owen lifted his eyes expecting to see a smile. But Nathan was frowning and biting his lip.
“That’s flattering, but I’m not interested.”
Owen raised an eyebrow and glanced briefly at the bulge in Nathan’s jeans again. “You sure about that?”
Nathan’s face was even pinker now, but he held Owen’s gaze. “I’m not interested in a hookup. I’ve been there, done that, and decided casual sex isn’t for me. I’m looking for something more serious.”
Owen blinked. This wasn’t how the conversation was supposed to go. He found himself blurting out his next words without thinking. “What, like a relationship? I could have a relationship. With you, I mean.”
Nathan chuckled then, a snort of laughter that raised Owen’s hackles, because what the fuck? He’d made a move and was being laughed at. That wasn’t cool.
“What’s so fucking funny?”
“Sorry.” Nathan pulled himself together and pasted on a more serious expression. “But Owen. You don’t do relationships. Everyone knows that. I know what you were like at uni, and from what I’ve heard on the grapevine, you haven’t changed much. And that’s fine—each to their own. But I don’t want to be another notch on your bedpost. I’d rather be friends with you than one of your conquests.”
Owen’s irritation rose, and he resisted the urge to pout childishly, but he wasn’t prepared to back down. Nathan’s words had stung, because yes—Owen would be the first to admit he was a bit of a tart on the surface, but at least he was honest about it. He’d never strung anyone along or made promises he couldn’t keep. And he’d never met anyone who made him want more than a one-night stand or a few casual no-strings repeats.
But that didn’t mean he wasn’t capable of having a relationship, and he found himself wanting to prove to Nathan that he wasn’t as bad as his reputation seemed to imply.
“Will you go on a date with me instead, then?” he asked.
“A date?” Nathan narrowed his eyes. “What, so we eat first and then have sex? I’m not sure that would be any better.”
“We don’t have to have sex!” Owen protested, raising his voice in frustration, then lowering it quickly as he noticed a few people glancing their way. “Jesus. Contrary to popular opinion, that’s not the only thing I’m interested in.”
“So if we went on a date, you wouldn’t expect me to put out?” Nathan’s lips quirked in amusement. He seemed to be enjoying this conversation a little too much.
“Not unless you wanted to.”
“I’d like to get to know you better first. I think we’d need more than one date for that.”
“Okay, so what’s your magic number? Try me.”
Nathan’s brow furrowed as he considered the question for a moment.
“Five,” he finally said. “Five sex-free dates. Then when we’ve had a chance to connect, we can take it from there. Oh… and in case it wasn’t obvious, if this is going to be a relationship, I’d expect you to be exclusive.” Nathan sat back in his seat and folded his arms. “So, what do you say?”
Owen glared at him. Nathan’s pink lips stretched further as he grinned, and all Owen could think was how he wanted to come all over Nathan’s smug face.
“I’m in.”
Nathan’s smile vanished abruptly. “You’re… what, really?”
“Really.” Owen smirked, finding Nathan’s obvious surprise very satisfying. “Five dates with no sex. So, when are you free this week? I can see you every night apart from Thursday, so if you’re free to meet most nights we can be done with all five dates by next weekend.”
“Oh no. No way.” Nathan shook his head. “If we’re going to take things slow, the dates need to be spread out. One a week for five weeks.”
Somehow Owen had thought his loophole was too good to be true.
“You drive a hard bargain, but okay.” He shrugged, conceding some ground, but not defeated. “Next weekend for our first date then?”
“Okay.”
“And while we’re discussing ground rules for this… whatever-the-fuck this is.” Owen waved his hand disparagingly. “What are we counting as sex for the no-sex rule? No fucking obviously, but does that extend to no blowing each other? No handjobs? What about dry humping?”
“Shh!” Nathan’s face was flaming, and he moved his chair closer, leaning in so he could talk quietly. “Keep it down, for fuck’s sake.”
To be fair, Owen’s voice had got rather loud, and a group of girls at the next table were looking very interested in their conversation.
“Well?” Owen asked. “We need to be clear what the boundaries are. Can we even kiss?”
“Kissing is fine,” Nathan replied promptly, and his gaze dropped to Owen’s mouth. He paused before adding, “No orgasms. That’s the line.”

The first question that struck me when I was getting ready to ask you was: Have you ever been rock climbing?
Yes! It's been a hobby of mine for years. I used to do it a lot before I had kids, but I still climb indoors—and very occasionally outdoors. I'm hoping to start doing it more often again now my children are older and childcare is less of an issue. I love it, it's such a buzz.

These two went on some very cool dates. What is the best date you've ever been on?
*Hides* next question please? But seriously, I have hardly ever been on what I would call an actual date. In my day—that makes me sound far more ancient than I am—dating wasn't really a thing that people did in the UK, not among the circles I moved in anyway. I think dating was a very American thing when I was a teen/young adult and has only caught on again over here since the advent of internet dating.
When I was young and single, we just used to go out in groups and end up snogging people in clubs/pubs/tents (delete as appropriate). My only experience of a one-on-one date was a trip to the cinema with a bloke called Anthony who I didn't even like much. Suffice to say that relationship only lasted a week.

Have you ever been in this sort of circumstance that Owen and Nathan are in, and if so who would you say you were more like Owen or Nathan?
I don’t think I have ever been in this exact situation. But if I found myself in similar circumstances I think I’d be Owen. If I’m into someone then I’d have sex with them if we were both up for it, I’ve never seen the point in *not* having sex if you both want it. So I guess I’d be the pushy one trying to win the other person over.

Where did the idea for this story come to be?
I honestly can’t remember. I think I wanted a structure and to write some UST for a change (instead of letting my characters jump straight into bed as they often seem to), and the idea for the five date challenge came from there. I remember thinking it was ridiculous and implausible and I wasn’t sure if I could pull it off. But once I started writing it fell into place (my characters found sneaky loopholes in the no sex agreement) and I was pretty pleased with the results. It was fun to write.

Would you ever consider giving Simon and Jack their own little tale?
Probably not. I think it would be odd going back in time and writing their story when I’ve already got them together in The Dating Game. They were sweet though, I enjoyed writing them as side characters.

What's the most romantic thing YOU'VE ever done for someone?
Okay this is a really hard question. I asked my husband and he literally laughed at me. I don’t think I have a romantic bone in my body, which is ironic really, given the fact that I’m a romance writer. I’m the sort of person who doesn’t care about romantic gestures like flowers and valentine/anniversary cards. For me, it’s the stuff that happens day to day in a relationship that matters. I try to be a considerate partner and I think we have a strong relationship, but romance isn’t really a thing that happens with me and my other half—unless you count sneaking kisses in the kitchen and making each other cups of tea if we’ve had a bad day.

Is there going to be anymore Nathan and Owen?
This was going to be another ‘probably not’ answer. I have an aversion to sequels, because I love writing the getting together part more than the established relationship part. I feel as though I left Owen and Nathan in a good place where it’s clear they have a future.
But funnily enough, answering this question has reminded me that I have a plot bunny for an established relationship story that might actually work perfectly for these characters. So maybe I could somehow work that idea into a sequel for these two? You’ve got me thinking now... *runs away to make notes*

When I received the ARC I of course was excited AFTER I read this book I made no secret to Jay how much awesomeness there was. It's such a unique idea for a story and I found myself flipping page after page eager to see what Nathan would do or Owen would do next. Truly a great Novella!