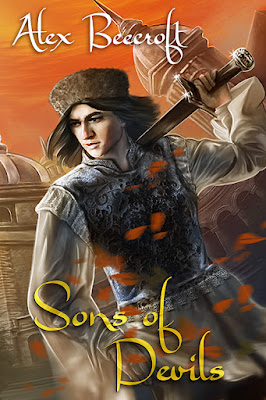 
British scholar Frank Carew is in Wallachia to study the magic generator on nobleman Radu Vacarescu’s land. There, his party is attacked by bandits and his friends are killed. Pursued by a vampiric figure, he flees to Radu’s castle for help.

Unfortunately, this is precisely where the vampires came from. If allowed, they would feed unchecked and spread their undeath across the whole Earth, but Radu maintains a shaky control over them and keeps them penned in his tiny corner of the country.

As Frank recovers from his assault, Radu finds himself falling for the young man. But loving Frank and not wanting to lose him leaves Radu vulnerable to his demons’ demands. Can he bear to let them feed on the man he loves? Or must he give in to their blackmail and set them free to feast on his entire country?

Beecroft won Linden Bay Romance’s (now Samhain Publishing) Starlight Writing Competition in 2007 with her first novel, Captain’s Surrender, making it her first published book. On the subject of writing gay romance, Beecroft has appeared in the Charleston City Paper, LA Weekly, the New Haven Advocate, the Baltimore City Paper, and The Other Paper. She is a member of the Romantic Novelists' Association of the UK and an occasional reviewer for the blog Speak Its Name, which highlights historical gay fiction.
Alex was born in Northern Ireland during the Troubles and grew up in the wild countryside of the English Peak District. She lives with her husband and two children in a little village near Cambridge and tries to avoid being mistaken for a tourist.

To celebrate the release of Sons of Devils, one lucky winner will receive a $10 Riptide credit and one ebook from Alex Beecroft’s backlist! Leave a comment with your contact info to enter the contest. Entries close at midnight, Eastern time, on March 18, 2017. Contest is NOT restricted to U.S. entries. Thanks for following the tour, and don’t forget to leave your contact info!

Posted by Diverse Reader at 4:19 PM