Blog Tour: Chance to be King by Sue Brown 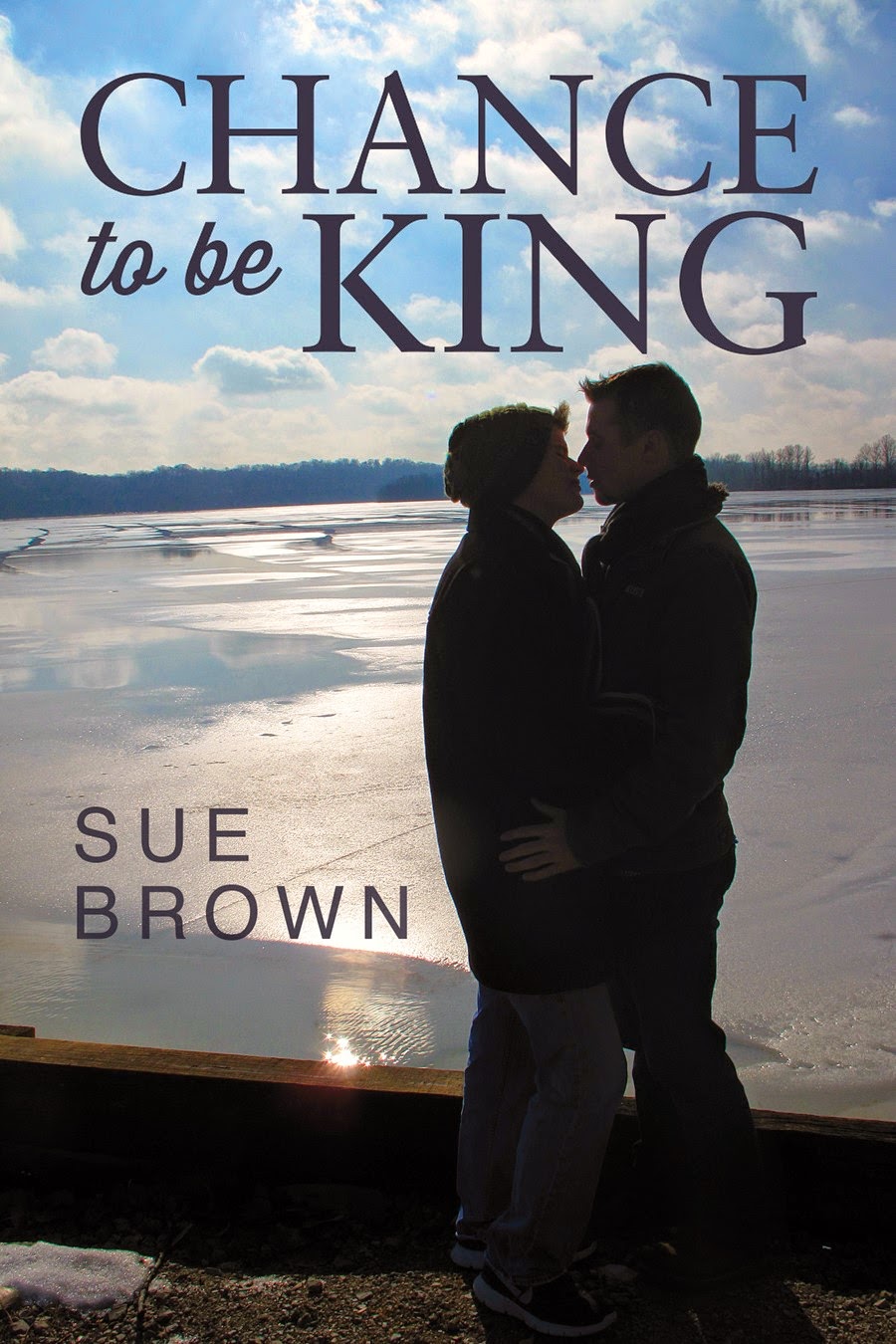 Chance to be King - 2nd Edition
After working nonstop for two years, actor Eric Pawlowski desperately needs a respite from his grueling schedule and the crippling migraines that come with it. Thinking that a few weeks in a secluded cottage is just the thing, his vacation gets off to a rough start when he almost mows down the only other guy who lives on the remote road. Fortunately Thomas is quick to forgive, and soon he, Eric, and Eric's two dogs are palling around like they've known each other for years.

But when Eric witnesses Thomas coldly order a lost stranger off his property, he starts to question how well he knows him. Despite a mutual attraction that has Eric cursing every time a well-meaning member of the nearby small town interrupts their attempts to get intimate, Eric wonders if acting on his desire for Thomas will get him involved in a situation he shouldn't be in. When his rented cabin catches fire in the middle of the night and the firemen call it arson, it confirms Eric’s suspicions.

To keep Eric with him, it's up to Thomas to come clean about who he is... and his involvement in a decade-old web of tragedy and revenge into which Eric has unwittingly walked.


Eric paused for a minute to take in his surroundings. The lake was huge, surrounded by reeds and banked in places by sandy beaches. A short note in the paperwork said it was suitable to swim in, and Eric had brought his trunks hopefully. There seemed to be a narrow path following the shoreline. Eric called to the dogs and set off to follow it. He didn’t necessarily want to explore all of it today, but he did think the dogs would benefit from a long walk after being cooped up in the truck for most of the previous day.

In places the overhanging branches meant Eric needed to duck, one of the disadvantages of being well over six feet tall. The dogs, however, had no such issues, and they plowed ahead eagerly. Their enthusiasm meant he lost sight of them until he reached a clearer spot in the trees. Eric could hear them splashing up ahead and smiled to himself. Millie was a terror for getting in the water, be it puddle or pond. Toby was more of a wimp and would dance around the edges before finally getting up the courage to venture in.

Eric finally reached the shoreline, to see Millie in the water as he expected. However, the man playing with her as she swam around was a surprise. He’d obviously been swimming, because he was bare from the waist up and—oh fuck—he was a vision: lean muscles, firm abs, and dark nipples against tanned skin. Yummy. Not that Eric was looking closely. At all. Okay, maybe it didn’t take much for Eric to react to a gorgeous man dancing half-naked in cold water.

Eric squinted as he looked a bit closer. Wasn’t this his rescuer from last night? Tim… Tony… Thomas… that was it, Thomas.

“Morning,” Eric drawled as he watched them play. “Hope she’s not bothering you too much.”

As Eric spoke, Thomas looked up and stopped horsing around. Millie gave a disappointed bark as she paddled and nudged Thomas’s hand hopefully. Thomas ran his hands though his hair to get the drips out of his face, his muscles rippling in a most distracting way. Eric’s cock was quite appreciative and twitched in his sweats.

“I don’t get too many dogs rushing to join me in my morning swim.” “Sorry, she never can resist getting in the water.”

Eric was trying hard to concentrate on the conversation, but really, most of his attention was taken by the view in front of him. He spent his days surrounded by handsome men and beautiful women, but this man took his breath away. His dark blond hair curled damply around his ears, and his bright blue eyes sparkled in amusement. Damn, could I get more girly?

“Eric?” Eric blinked. “Uh… yes?” He’d been so busy staring at the water droplets running down Thomas’s chest… and—oh, are they freckles? Eric couldn’t tell from this distance.

He dragged his gaze away reluctantly from Thomas’s body to his face. Not that it was any less distracting with those eyes…. Fuck, those eyes. “Yes?” Thomas was smirking at him unashamedly.

“Would you mind calling your dog back? I’m getting cold now, and I’d like to get out.”

Eric stared at him stupidly for a minute, and then his brain finally got on board with the conversation. “Yes… I mean, sorry. Millie, come here girl.”


MY REVIEW
I very much loved this story. It's a love story with suspense. I love when I read a book and the evolution of the characters is so well built. Sue Brown has created a beautiful world. I love how these characters were incomplete and yet when they are together you easily see that they can't be a prt. You wonder how they ever survived apart at all! I had warm and fuzzies throughout and a bit of nail biting thrown in there as well! Great read!

Sue Brown is owned by her dog and two children. When she isn't following their orders, she can be found plotting at her laptop. In fact she hides so she can plot and has gotten expert at ignoring the orders.