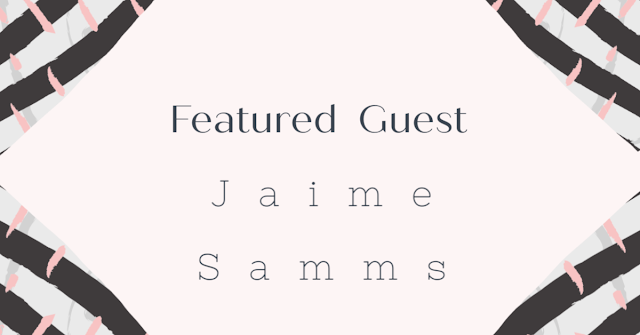 Diverse Reader is so happy to have Jaime Samms here today with an amazing post and talking about her new book, Thief In The Light . So, grab a drink, relax, and enjoy.

As I was looking around my office trying to come up with what to talk about for this post, I realized that my office is very…me. Tidy, organized, pretty—except where it’s not. I work in here, so there’s stuff everywhere. Both my jobs happen here, and by that, I mean my writing and my crafting. 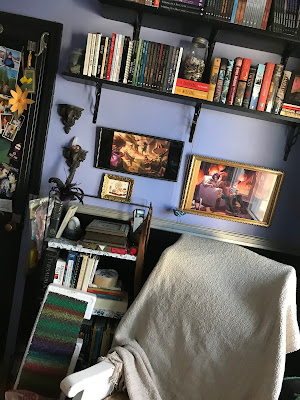 So this is a room filled with books. Ones I wrote, ones I want to read. Even a few I have read.
Boxes filled with scraps of colourful paper, because I also like to make scrap books, when I have the time and forethought to print the millions of pictures I take.
There is framed art on the wall of beautiful images I love to look at by very accomplished artists. There is art on the shelves from all the strange and wonderful craft projects my kids made when they were small. It’s colourful, too, made of plaster, tiny hand prints, incredibly…unique paint combinations.
And yarn. There is yarn. Not my main stash, but I always have a project or five on the go, so yarn and cloth of every description.
Plus the tools of all those trades. The computer, seventeen pairs of useless scissors, eighty-five crochet hooks, thesauruses (yes, multiple thesauruses. 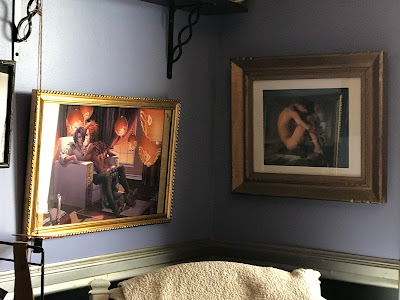 Don’t ask me why. I have the internet, so why do I need more than one six-inch-thick book of words? No one knows why, but apparently, I do.) needles. Thread. Beads. Glue sticks. Bit and bobs, old jewellery. Just. All the things, mostly arranged in pretty jars and carefully documented in Excel so I know where to find it all.

Why do I tell you all of this?
Because what I realize is that in this room where I spend more time than I do anyplace else, I have arranged everything I love. I made it pretty. I made it a reflection of me.
And then I wrote a book in which the home where the two main characters spend 95% of the book is not, on first blush, a reflection of either man. It’s an old, creaky Victorian mansion decorated with the antiques Kreed found in the attic. He didn’t put his stamp on the place, but instead, embellished the personality he sensed the house already had.
Yet he lived there, worked there, and found love there. The house made him happy, so it must, in some way, reflect some part of him. I don’t think I wrote Kreed to be an eighty-year old Victorian spinster in the body of a thirty-something gay man. So now I’ll have to sit back and think some more on why that weird combination worked as well as it did.
So there you have it. Whoever told you every aspect of a book is carefully thought out by the author maybe hasn’t considered that sometimes, we don’t know how or why a thing worked. It just came out that way. Serendipity. Accidental coincidence. Luck. Call it what you will. Sometimes, some of the best moments in a book were not planned. Sometimes, the curtain are ugly just because the curtains are ugly. 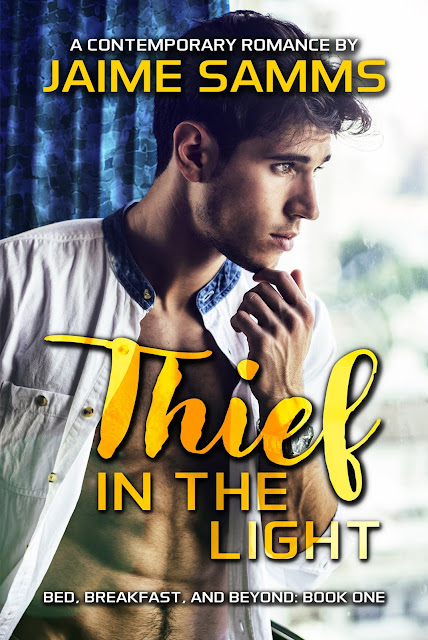 Blurb:
Lucky Denver has wandering feet, sticky fingers and an unreliable moral compass—he’s never had a home and he’s not so sure he cares about what he’s missing.
Arnold Kreed who runs a small-town B&B knows what a home should be. So does his home, The Oaks—aka Mildred—and she has some very definite opinions on who should stay and who should go.
Mildred wants Lucky to stay—and while Kreed is surprised, he can’t really blame the old girl. He’s getting sort of attached himself. Lucky might be fine with the house’s eccentricities, but he’s not so sure Kreed will be fine with the man attached to Lucky’s real name. When Kreed falls ill, Lucky needs to make a decision—wander away like he’s always done or stay and be his better self. Kreed’s hoping he’ll stay—and so is The Oaks, and Mildred has a way of getting what she wants.

About the Author
Jaime Samms is a plaid-hearted Canadian who spends the too-long winters writing stories about love between men and the too-short summers digging in the garden.

A multi-published author whose work has been translated into French, Italian, and German, Jaime delights in the intricate dance of words that leads her through tales of the lost and broken hearted men she writes about, to the love stories that find and mend them.

She also makes pretty things with yarn and fabric scraps because in her world, no heart is too broken to love, and nothing is too worn or tired it can’t be made beautiful. All it takes is determination and the ability to see life a little bit left of center.

Posted by Diverse Reader at 5:42 AM