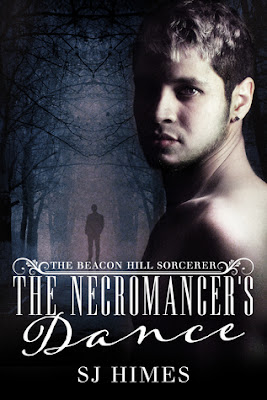 BLURB In a world where magic is real and evil walks amongst humanity, a young sorcerer is beset upon by enemies, both old and new. Angelus Salvatore is the only necromancer in all of Boston, and his name is whispered warily by the undead and fellow sorcerers alike. He and his brother Isaac are the lone survivors of an attack by an army of the undead, in which Angel used a spell so powerful it forever marked his place in history. Now, years later, Angel struggles to balance his career as a teacher of the higher magical arts, his role as big brother, and a tenuous relationship with an Elder vampire from the local clan. When his brother’s boyfriend is used as a pawn in a mysterious plot to draw Angel out, Angel is once again pulled back into the old hostilities that fueled the Blood Wars and led to his family’s death. Leaning on others for help is something Angel cannot do, and while he searches for clues into who may be targeting him and his brother, Angel finds his heart steadily growing occupied with Simeon, Elder and vampire. Dealing with death magic and vampires on a daily basis may leave Angel jaded when it comes to life and staying that way, but the more time he spends fending off the ancient vampire’s attention and affections, the more he realizes he wants to give in. Can Angel find out who wants him dead, and keep his heart safe in the process? How can he fall for a vampire, when his whole family was torn apart by an army of the undead? Death stalks the streets of Boston’s historic Beacon Hill….and there is no one more suited to battle against death than a necromancer. MATURE CONTENT Contains graphic violence, male/male sexual contact, a cranky necromancer, a sexy Irish vampire, and a pesky demon.


The floor shook as the demon crushed the shattered pieces of the bedroom door underfoot, its shoulders scraping the sides of the doorway. He looked back at it through the empty space under his bed, and the sight of grey-scaled and yellow clawed feet attached to thick, heavily muscled legs made his stomach want to crawl out around his spine and hide. The air stank of damp earth and rotting flesh, and Angel swallowed back a dry heave as he struggled to breathe past the odor and his building fear.
“What is it?” Simeon hissed back, but Angel had no time to answer. He had seconds to stop the beast before they were both torn to strips of red meat.
Angel looked up at his nightstand, his alarm clock showing it was minutes ‘til sunrise. He just had to last until then. A demon this big had to have been summoned nearby, since he hadn’t heard screaming from civilians and the sounds of police sirens. If he could find the circle, he could stop the demon.
“Angelus…” The demon’s voice was many, a teeming mass of fractured tongues weaving together to form words in a language not its own. A large, three-fingered hand rose over the bed, latching into the edge of the bedframe inches above their heads.

I'm a self-employed writer who stresses out about the silliest things, like whether or not I got my dog the best kind of snack and the fact my kindle battery tends to die when I'm at the best part in a book. I write mainly gay romance, erotica, and urban fantasy, with ocasional forays into contemporary and paranormal. I love a book heavy on plot and character evolution, and throw in some magic, and that's perfection. My current series are: The Beacon Hill Sorcerer, Bred For Love (as Revella Hawthorne), and The Wolfkin Saga. My last two novels in the Beacon Hill Sorcerer won 3rd Place in the Gay Fantasy category for the 2016 Rainbow Awards. I live in New Orleans, where the personalities are big and loud and so are the bugs! New Orleans is rich in cultural history, and the flavor and music of the City is impossible to hide. Before that, I lived all over the United States: Tampa, Western Massachusetts, Indianapolis, and on and on.... I'm a nomad, and I've yet to find a place that calls to me strongly enough to become home. My faithful travel companions are my dog Micah, the numerous voices in my head who insist they all get put on paper, and the wind at my back. Links: Website | Blog | Facebook | Facebook Fan Group | Twitter | Amazon