Blog Tour: Back To The Sky by Katey Hawthorne #Giveaway #Review Guest Post 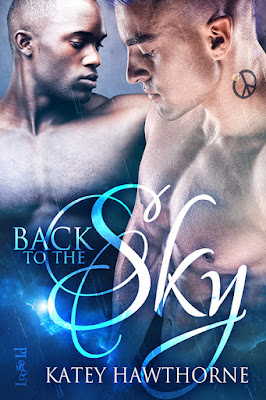 Blurb
Rather than spend his first post-college summer on the beach with a hot boy and a margarita, Zane Woodward goes home. While the lectures aimed at getting him to be more respectable like his lawyer father aren’t appreciated, Zane wants to be near his sister and his best friend—both of whom he’s convinced need him.

Enter Geordie Finsen: the Buddhist, blue-haired, stacked house sitter-next-door. Geordie has a penchant for parties, older women who can pay the bills, younger men who can wear him out—and he may or may not be able to control the weather.
While Geordie and his philosophies begin untangling Zane from his own expectations and hang-ups, they bring the two closer and closer. Soon their chemistry flares into a hot and heavy summer romance. But Geordie has hang-ups of his own, including an aversion to getting too attached to anyone or anything. When things get a little too heavy between him and Zane, his instinct to cut loose and run free is tested, and Zane’s plans for a perfect escape of his own might never get off the ground.
Review
This was the first time I have read this author and there's such a thrill with that. You don't know what you'll get, you hope it's great, nervous. Well, I was very happy with Katey Hawthorne's style. And you have to love the style.

In Back to the Sky we are dealing with a lot here. Mostly on Zane's part. His heart is filled with music yearning to be free. He has an absent mother, a controlling and just plain horrible father imho! And then there's his sister. He won't leave her to be free. He won't go without her.

Then there's Geordie. Free spirited, Buddhist, meditation guru. He pulls Zane from himself. A lot of Zane is the fight he has with himself and he needs his center. Geordie is ALL about discovering Zane's center... and other places LOL.

I really loved the spiritual magic feel this book had. The tingle of all the possibilities as I read on. Very enjoyable read!

Back to the Sky Blog Tour: Pieces of Me
by Katey Hawthorne
It's a pretty standard thing to put little pieces of yourself into characters, truth be told. Not much, because writing about myself would be boring as hell, but just putting in certain traits or even family stuff can make it feel more, I don't know, connected. Not just for me, but sometimes--to my amazement and excitement--readers, which is the best thing ever.
Back to the Sky, while it totally got my obsession with elemental fae-type characters (note: there are no actual fae in this book, Geordie's just kinda... fae-esque. And possibly controls the weather. Maybe.), well, that doesn't count. Zane got my guitar--my Les Paul is named Rodin, not Xenobia, but it's the same guitar--and his sister Lauren got... my anxiety.
Yeah, she totally got the short end of the stick. Sorry, Lauren!
Zane's best friend Rafael got my unabashed bisexuality... he might've won that particular lottery.
And Geordie got my interest in Buddhism. Though his is sort of turned up to eleven, not gonna lie.
None of them, however, are anything like me--which is why I dare to hope the book isn't a total snooze fest. But it's a good way for me to hook into them when writing, anyhow, and hopefully for others when they read.
So there it is, one weird little technique I have. It's not a rare one, loads of writers love it, but it can be a fun one. Or a soul-crushing one, depending on what kind of qualities you're passing out to your characters. This time, though, I got off pretty easy.
Wish I could say the same for Geordie and Zane... but there's a chance for them, at least. A pretty good one, if they can pull it together...
Author Bio
Katey Hawthorne is an avid reader and writer of superpowered romance, even though the only degree she holds is in the history of art. (Or, possibly, becausethe only degree she holds is in the history of art.) Originally from the Appalachian foothills of West Virginia, she currently lives in Ohio. In her spare time she enjoys comic books, B-movies, loud music, Epiphones, and Bushmills.
Author Contacts
Tumblr
Twitter
Facebook
Blog
a Rafflecopter giveaway
Posted by Diverse Reader at 4:53 AM