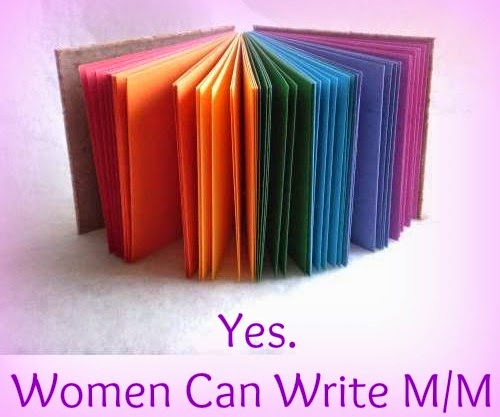 Even though this topic has been beaten to death, it resurrects itself when the narrow minded speak. I have never entered a heated debate over this issue and likely never will. I have seen it talked about in all sorts of social media... Can women write M/M? I counter that with... Why do you think they can't?

I have read my weight and then some in books in all genres. I honestly never cared the gender of the author, just that the story was great.

Talent is talent, plain and simple. A book pulls you away from your reality and into a different world. Whoever the person who brought you there doesn't matter. I care about whats between the ears not between the legs.

In the M/M world the debate is that women shouldn't write about men with men. Now, not EVERYONE agrees with this and those that do are in the minority.

The LGBTQ community wants equality. Well, how do you expect that to happen when there are people saying "Being a women in the M/M genre is wrong." Hypocritical much? Yeah it is!

QUALITY! That is what matters. Some of my favorite authors in the M/M genre happen to be women... Amy Lane, Mary Calmes, Anne Tenino, Rhys Ford, Kate Aaron just to name a few. Amazing the way they pull emotion from my heart and soul. Then you have Male authors in the genre Kade Boehme, Edmond Manning, John Inman, They do it too! Do I care if any of them are men or women? NOPE!

Since I hope to be publishing my first M/M book soon under a pen name I really hope that my gender won't matter but that the quality of my work is what does.

Let's put this puppy to rest, shall we people?
Posted by Diverse Reader at 3:46 PM